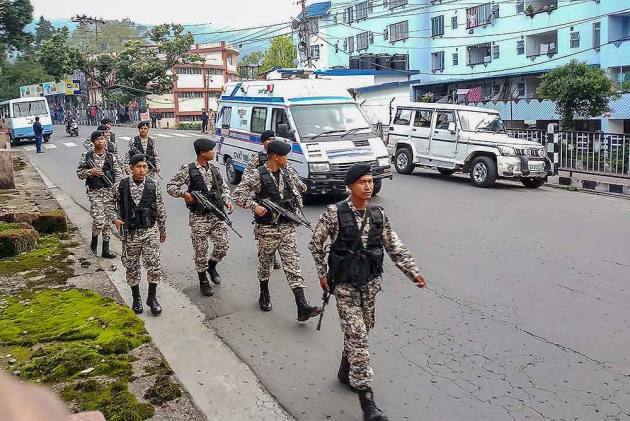 A 37-year-old man was killed by three unidentified people at his home in Meghalaya's East Khasi Hills district in the early hours on Sunday, taking the toll in clashes between tribal and non-tribal groups in the state to three, police said.

The incident happened in Pyrkan village under the jurisdiction of Shella police station, Assistant Inspector General of Police Gabriel Iangrai said in a statement.

No one has been arrested so far in the killing of the man, identified as Uphas Uddin, Iangrai said.

The police have also issued advisories to the general public, asking them not to park vehicles at the roadside or at the isolated places which may be vulnerable to acts of vandalism and arson.

The police said that a 28-year-old man, identified as Aditya Kumar, was stabbed by unknown assailants with a broken bottle at lower Mawprem. He sustained injuries and was admitted to a hospital.

The police said miscreants were pelting stones at vehicles plying through the National Highway in Puriang area in the evening,

The night curfew imposed after violent clashes was lifted at 8 am on Sunday, barring in areas under the jurisdiction of Lumdiengjri and Sadar police stations and Cantonment Beat House, where indefinite curfew continued to remain in effect, officials said.

The curfew was imposed since 9 pm on Saturday, following the death of two persons in separate attacks in Ichamati area in East Khasi Hills district on Friday and at Shillong's Iewduh market on Saturday, they said.

Iangrai said an employee of the Meghalaya Basin Development Authority was assaulted on Saturday night at Mawthabah and admitted to the North Eastern Indira Gandhi Regional Institute of Health and Medical Sciences.

The situation is tense following the three deaths, especially of a Khasi Students' Union (KSU) activist in a clash between members of the students' body and non-tribals during a rally in Ichamati area, which is close to the Indo-Bangladesh border.

East Khasi Hills district authorities said the curfew was extended in areas under the jurisdiction of Lumdiengjri and Sadar police stations, and Cantonment Beat House over fears that there might be a serious breakdown of law and order in those places.

"There is a likelihood of a serious breakdown of peace and tranquillity which may lead to loss of life and property... I do promulgate curfew in these areas from 8 am on March 1 until further orders," District Magistrate Matsiewdor W Nongbri said in an order.

Mobile internet and messaging services have been temporarily suspended in six districts of the Khasi and Jaintia Hills region to curtail rumours that could deteriorate law and order, the officials said.

Clashes broke out between KSU members and non-tribals during a rally organised against the Citizenship (Amendment) Act and demanding implementation of the Inner Line Permit (ILP), at Ichamati on Friday, district Superintendent of Police Claudia Lyngwa said.

Eight people have been arrested in this case and a magisterial inquiry has been instituted to probe into the incident, she said.

One person was stabbed to death at the Iewduh market under Cantonment Beat House on Saturday when unidentified persons went on an attacking spree that left seven others seriously injured, the SP said, adding that no one has been arrested so far in this connection.

Three companies of central forces have been deployed in the sensitive areas of the district, including in the affected areas of the city, the officials said.

Governor Tathagata Roy and Chief Minister Conrad K Sangma have appealed to the citizens to maintain peace. Both had taken to social media to issue their appeals even as mobile internet services were suspended in the six districts.

Chief Minister Sangma reviewed the law and order situation in the state and appealed for peace.

"I appeal to all our citizens and people of the state to ensure that peace returns and urge upon different organisations to refrain from any violent activity. A magisterial inquiry has been set up. We have ensured that enough manpower is put in place in the affected areas," he had said.

He announced an ex gratia of Rs 2 lakh for the family of the man killed in Friday's clash.

Meanwhile, a police officer said that the state police, which has set up helpline number 1800 345 3846 for stranded tourists, has successfully escorted at least 16 tourists out of the hill town to Guwahati after receiving frantic calls for help from them.