The NIA charge sheet says Yasin Malik had visited the Lashkar e Taiba camps in Muree in Pakistan occupied Kashmir and addressed the LeT cadres there. 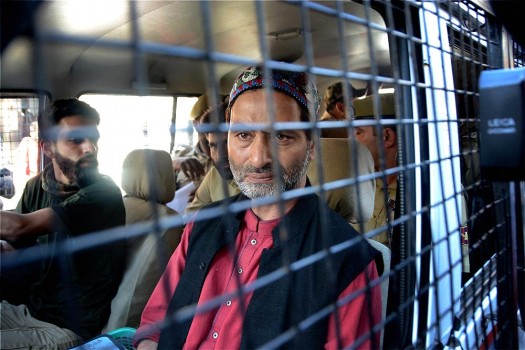 Tightening the noose around the separatists, the National Investigation Agency (NIA) is likely to file charge sheet against several Kashmiri separatists, including Yasin Malik of the Jammu and Kashmir Liberation Front (JKLF) on Thursday under the Unlawful Activities (Prevention) Act for allegedly receiving funds from Pakistan to carry out terrorist activities and stone pelting in 2010 and 2016.

The NIA in 2017 arrested several separatists belonging to the two factions of Hurriyat Conference led by Mirwaiz Umar Farooq and Ali Shah Geelani for terror funding.

The agency has also arrested Zahoor Watali, a Srinagar businessman, for receiving secret funds for separatists from Pakistan.

Malik was arrested on April 4 for his role in fomenting unrest in Kashmir during separatist agitations in 2010 and 2016 that was triggered by the killing of Hizbul Mujahideen commander Burhan Wani.

He was part of the Joint Resistance Leadership (JRL), which also included Mirwaiz and Syed Ali Shah Geelani factions and spearheaded the separatist agitations.

Malik, who is married to Mashal Mailk of Pakistan, has been accused of having links with Hafiz Sayeed, who has been declared as global terrorist by the US for his role in Mumbai attacks and terrorism in Kashmir.

The NIA charge sheet says Malik had visited the Lashkar e Taiba (LeT) camps in Muree in Pakistan occupied Kashmir and addressed the LeT cadres there.

"Accused Yasin Malik has himself admitted this fact in an interview with Rajat Sharma (in television programme) 'Aap ki Adalat'," the charge sheet said.

The charge sheet also cited an email of Malik in which he had e-mailed the reports of LeT, TuM and Kashmir Conference to one Parvez Ahmed.

The charge sheet has also delved into Malik's past and said he developed anti-India feelings during his school days and voluntarily associated himself with different secessionist organisations and leaders like Shabir Shah and Yousf Shah alias Syed Salahuddin, the PoK-based chief of Hizbul Mujahiden.

He initially joined Islamic Students (ISL) League and at his instance a number of youth joined the ISL. He was arrested in 1987 for indulging in subversive activities and was subsequently released on bail, says the charge sheet.

In a separate case Malik, 53, is also facing trial for his alleged role in the killing of IAF officials in Srinagar, including a squadron leader in 1989.

'Some Want RSS And Not Gandhi As India's Symbol': Sonia Gandhi Attacks BJP