The Muslim men later said they considered it their duty as the woman used to shower lot of affection on them during their childhood. 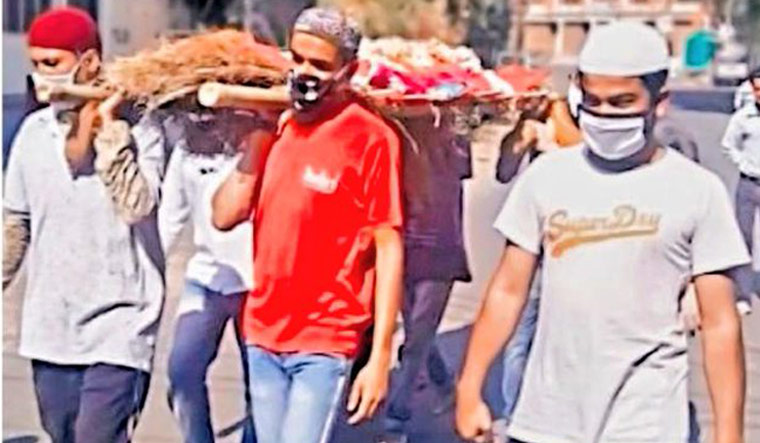 Members of the Muslim community helped in performing the last rites of their Hindu neighbour
in Madhya Pradesh's Indore city as relatives of the deceased could not reach the place due to the nationwide lockdown.

Senior Congress leader and former state chief minister Kamal Nath lauded the gesture of the Muslim community members, saying they have set an example in society. Draupadi Bai, 65, a poor woman who was suffering from paralysis and living with her elder son, died at her residence in South Toda area of Indore on Monday.

Due to the lockdown, the deceased's relatives could not reach the place for her funeral and no vehicle was available to carry the body to the cremation ground.

When some Muslim community members residing in the neighbourhood came to know about it, they came forward to help the grief-stricken family.

Wearing masks as a precaution against coronavirus, they helped in making arrangements for the deceased's last rites and carried the body on their shoulders to the cremation ground located about 2.5 km away from the area, state Congress spokesman Narendra Saluja said.

A picture of the Muslim men carrying the Hindu woman's body on their shoulders went viral on social media and their gesture was widely appreciated by netizens.

The Muslim men later said they considered it their duty as the woman used to shower lot of affection on them during their childhood.

Lauding them, Kamal Nath in a tweet said, "It is really praiseworthy that Muslim community persons along with the old woman's two sons carried the body on their shoulders for her last rites. This has set an example in society."

"It reflects our Ganga-Jamumi culture and such scenes enhance mutual love and brotherhood," he added.