India’s membership for the next two years as a non-permanent member of the United Nations Security Council is not really anything to write home about. 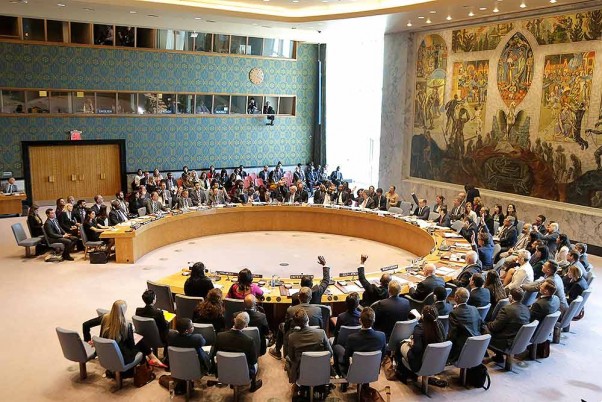 Members of the Security Council vote on a resolution during a Security Council meeting at United Nations headquarters.
AP/PTI
Seema Guha 2021-01-05T14:16:55+05:30 At The UN, India Rides A Toothless Tiger

From January this year India begins its two-year stint as a non-permanent member of the United Nations Security Council (UNSC), the highest decision-making body on international peace and security. There has been much noise over this with the government going out of its way to emphasise the importance of the move. This is the eighth time that India has been elected as a representative from the Asia-Pacific region.

The Narendra Modi government is using the opportunity to project its importance in the international sphere to the domestic audience. The elections for the Asia-Pacific seat was held on June 17 last year. Just before the polls foreign minister S Jaishankar spelled out India’s priorities. Releasing a brochure at that time, he listed five key focus areas: terrorism, reforming the UN system, comprehensive approach to peace and security and promoting technology with a human touch.

Yet the UNSC non-permanent position is largely symbolic with no real power. “The UNSC itself does not do much, and the non-permanent members do even less,” said former diplomat Dilip Sinha. In his excellent book on the UN, the ”Legitimacy of Power: The Permanence of the Five in the Security Council,’’ he shows how the Permanent Five- US, Russia, China, UK and France are the ones who call the shots. For the rest it is just to sit and listen while the P-5 take the decisions.

“In recent years the UNSC has initiated no new resolutions. It has not even announced any new peace keeping initiatives or imposed fresh sanctions. All it does is to add an individual to the sanctions list or lift sanctions from certain individuals or groups if necessary. Beyond that no new initiatives have been taken by the UNSC in the last 10 years,’’ he said to Outlook.

When US President George Bush went to war against Iraq in 2003, the UNSC was by-passed. Bush and former British Prime Minister Tony Blair with the help of their intelligence agencies cooked up a story about weapons of mass destruction and destroyed a nation. The UNSC remained a mute spectator.

In India’s earlier stints as non-permanent member of the UNSC, a total of 14 years, precious little was achieved. Not much can be expected now. UNSC reforms have been in the cards for over two decades, yet the P.5 are reluctant to extend the charmed circle. Realms have been written about the need for expanding the UNSC permanent membership to reflect today’s changes on the ground. The UNSC reflects the world as it was in 1945 after the victory of the allies in World War 11. India, Brazil, Japan and Germany have been knocking at the door, so are dozens of others, but there is no forward movement.

Meanwhile the Modi government would no doubt project its membership for the next two years at the high table as a singular achievement. In 2011-2012, when India was again a non-permanent member and Hardeep Puri was India’s ambassador to the UN, he was very active. He initiated a resolution on Syria and got all 15-members of the UNSC to pass it. That was seen as a major achievement. But beyond passing resolutions the UNSC is a toothless tiger.

The temporary members have little say in important matters. In fact since 1986, when the Iran-Iraq war was at its height, the P-5 would meet separately on vital international issues and then call in the ten other ambassadors to brief them. Holding meetings with just the five major powers have now become the norm on important issues. Ambassadors representing the non-permanent member nations are allowed to question or ask for clarifications. But they cannot make a difference. In short, they have no impact on the decision already made by the P-5.