Clashes between anti-farmer protesters and farmers broke out at Singhu border on Friday afternoon. 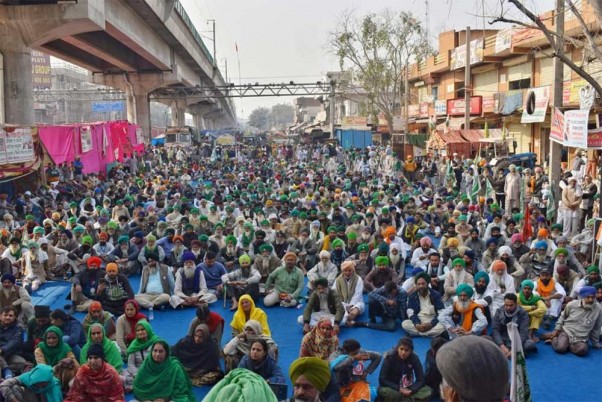 The number of farmers staging protests at Singhu and Ghazipur entry points to Delhi grew overnight with more joining since early Friday morning even as police continued to threaten action to evict them.

Clashes broke out between protesting farmers at the Singhu border and a group of people who came to remove them from blocking the roads around 1.45 pm on Friday. The two groups threw stones at each other.

The police resorted to teargas to control the group of locals who allegedly damaged some property and threw stones at protesting farmers. Several people are reported to have been injured.

Farmer groups maintained that those indulging in violence had nothing to do with them and were "outsiders trying to create problems as witnessed on the Republic Day".

Agitating farm leaders stated that they were firm on observing protests, including a hunger strike, in Delhi and villages across the country on the Martyr's Day, which marks the death anniversary of Mahatma Gandhi.

They stated that several Delhi government representatives including deputy chief minister Manish Sisodia had visited the farmers and assured that water and power supply would be restored at their camps.

Thursday's incidents, which went viral on social media, seems to have struck a chord with more farmers from across many states deciding to step up the protest. In Haryana, hundreds of farmers set off on Friday morning to join fellow farmers at Delhi borders.

Earlier in the day, hundreds of farmers from parts of Haryana on Friday decided to join farmers' protest held at various borders of the national capital to raise their voice against the new agri laws. A number of farmers from Jind, Rohtak, Kaithal, Hisar, Bhiwani and Sonipat will be heading towards various protest sites at Tikri, Singhu and Ghazipur to join the ongoing agitation, despite the Ghaziabad administration's ultimatum to vacate the protest site.

#WATCH: Scuffle breaks out at Singhu border where farmers are protesting against #FarmLaws.

Group of people claiming to be locals have been protesting at the site demanding that the area be vacated. pic.twitter.com/XWBu9RlwLP

Security was beefed up at the border points in the national capital. Heavy police force, including the paramilitary forces, were deployed across the borders to ensure calm.

The farmers claimed that issuing the lookout notices and asking the farmers to vacate the site will not weaken the ongoing agitation against the Centre's new farm laws.

Water minister Satyendar Jain on Friday claimed that the Delhi Police prevented him and DJB vice-chairman Raghav Chadha from supplying drinking water to farmers protesting at the Singhu border.

Jain and Chadha reached the Singhu border with 12 water tankers around 11.30 am. However, police personnel stopped them from going towards the protest site.

"We had come to make arrangements for drinking water and toilet facilities for the farmers. The police prevented the DJB's water tankers from reaching the farmers," Jain told reporters.

"The police personnel present on the spot said they had been ordered not to allow water tankers to reach farmers. The BJP government in the Centre has denied this basic facility to our farmers," he alleged.

Chadha said the "farmers are not terrorists" and appealed to the BJP government to treat them with respect.

The BJP government is preventing the farmers from accessing basic facilities such as drinking water, toilets and langar (community kitchen), he claimed.

The police on Thursday intensified barricading, completing shutting small passages being used by farmers to travel to the Delhi side on foot, and deployed more personnel at the protest site.

The development came after around 400 police personnel were injured during the farmers' tractor parade on Republic Day.

A total of 33 FIRs have been registered in connection with the violence during the rally.

On Thursday, the Delhi Police issued 44 lookout notices to protesters and farmer leaders named in an FIR.

"We cannot tolerate a senior farmers leader being pushed to this situation. We are all united and our stir will continue till we force the government repeal the farm laws," said a protesting farmer near Rohtak's Madina toll plaza on Friday.

He alleged that "injustice" was being meted out to the farmers by the government by not repealing the new farm laws.

At the protest site at the Uttar Pradesh Gate in Ghazipur bordering Delhi, Bharatiya Kisan Union leader Rakesh Tikait broke down while speaking to the media on Thursday evening.

Farmers in Jind's Kandela blocked the Jind-Chandigarh road late for a few hours on Thursday night. They were protesting against the Ghaziabad administration's ultimatum to the protesting farmers at UP Gate to vacate the site by Thursday night.

Khap leader from Jind, Azad Singh Palwa told reporters in Jind that it is being propagated that farmers' agitation has weakened, which is not the case.

"We condemn the lookout notices to the farmer leaders. We also condemn the government for serving ultimatum to vacate a protest site. We want to warn the government that such moves will not weaken this agitation, but only make it stronger," he said.

He also said that donations will be raised from villagers and more people will be mobilised to join the agitation.

"We will be sending tractor loads of essential supplies like food, ration, clothes for our brethren who are fighting this agitation. More people will be sent to join the stir," he said.

On Friday morning, a group of farmers were holding a protest near Madina toll plaza in Rohtak.

"All farmers are united, no one can break this agitation, which will continue till these farm laws are repealed," said a protesting farmer.

He said the protest near the toll plaza will continue and will be intensified in the days to come.

In Karnal, local farmers had resumed their 'dharna' at the Bastara toll plaza on Thursday, a day after the administration had got it vacated.

However, on Friday, there were reports of heavy police deployment near the toll plaza and administration had got the site vacated once again and normal operations at the plaza resumed.

On Thursday, a group of protesters near the Bastara toll plaza had burnt an effigy of actor-turned-activist Deep Sidhu, who has been booked in connection with the Red Fort incident in Delhi on January 26.

On Friday, a large number of farmers reached near the toll plaza in Panipat and held a protest expressing solidarity with peasants protesting near the Delhi's borders.

"We condemn the lookout notices against farmer leaders...this agitation will now gain more momentum and force the government to roll back the farm laws," said a protesting farmer in Panipat.

The Delhi Police on Thursday issued lookout notices against farmer leaders and announced a probe into the "conspiracy" behind the Republic Day violence, even as the Ghaziabad administration gave an ultimatum to the protesters at UP Gate to vacate the site by midnight.

He appealed to farmers to hold dharnas at all toll plazas in Haryana on January 30.

Thousands of farmers have been protesting at Delhi's borders with Haryana and Uttar Pradesh demanding rollback of the Farmers' Produce Trade and Commerce (Promotion and Facilitation) Act, 2020, the Farmers (Empowerment and Protection) Agreement on Price Assurance and Farm Services Act, 2020 and the Essential Commodities (Amendment) Act, 2020.