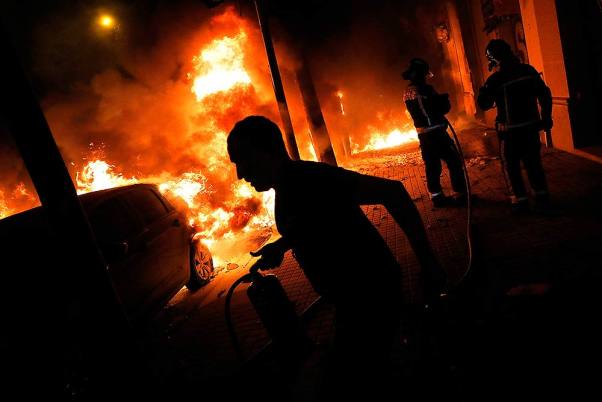 A mob led by members of a students' body on Friday set ablaze several government offices and ransacked a police station in a remote circle of Arunachal Pradesh to protest against filing of nomination papers by former Assam Rifles personnel living there for decades in panchayat election, an official said.

The incident took place at Vijaynagar in Changlang district where ex-employees of the paramilitary force were living since early 1960s. They originally hailed from outside the state but form the majority of the local population now, official sources said.

Around 400 people led by the Yobin Students Union set fire to the offices of the Extra Assistant Commissioner, Special Branch of the state police and the post office besides ransacking the local police station, the official said.

The civil helipad was also partially damaged by the mob, Public Relations Officer of the police Rohit Rajbir Singh said.

However, there was no report of casualties.

"They came from nearby Gandhigram area. Armed with daos (a sharp weapon), sticks, bows and arrows, they set on fire the public properties demanding immediate fulfilment of their demands," Singh said.

The demands of the protestors include cancellation of the right of former Assam Rifles personnel living in the area to take part in panchayat elections and their immediate deportation.

"The situation is tense but under control. Around 30 police personnel led by Changlang Superintendent of Police Mihin Gambo are presently camping in the area, while additional forces are being dispatched for maintenance of law and order," Singh said.

Tirap, Changlang and Longding region DIG Kime Kaming air dashed to Vijaynagar, while a police team led by IGP (Law & Order) Chukhu Apa along with Special Branch SP John Pada is on the way to the area, Singh said.

"These senior officers will camp in Vijaynagar for the next few days," he said.

Vijaynagar, which is yet to be connected by roads from other areas, is the remotest circle of Changlang district surrounded on three sides by Myanmar. The circle consists of 16 villages having a population of over 4,000 people, official sources said.

Several students' bodies of Arunachal Pradesh opposed the participation of the former Assam Rifles personnel in the December 22 panchayat polls, which prompted the State Election Commission to defer the poll in Vijaynagar, with apprehension of breakdown of law and order in the area.

As there is no road connection, people of the area are dependent on military helicopter for essential services and requirements. Miao is the nearest town to Vijaynagar which is 157 km away.