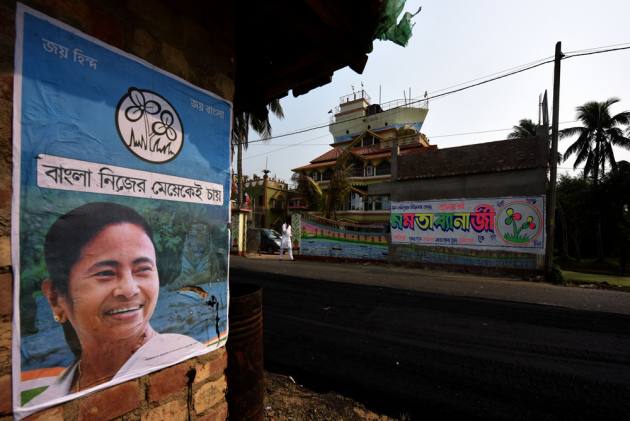 If ‘saving West Bengal from transforming into West Bangladesh’ is a dominant theme of the BJP’s campaign then in Nandigram, the seat chief minister Mamata Banerjee is contesting from, the battle is ‘against Pakistan’.

A courtesy Suvendu Adhikari, Nandigram’s outgoing Trinamool Congress (TMC) MLA and Mamata Banerjee’s erstwhile pointsman for the area who is now contesting on a BJP ticket.

As the election date inches forth – it will go to the polls in the second phase on April 1 – the campaign is getting all the more intense.

A Bonfire Of Defectors

“Begum will turn Bengal into Mini Pakistan if she wins,” Adhikari said while addressing a gathering in Nandigram on March 29. This comment came following charges such as, “The honourable Begum is causing pain to the people of the state” and “Mamata Begum has flown up to here, she will fly back after the polls” and “I’ll defeat the Begum.”

Begum, of course, refers to Mamata Banerjee, whom Adhikari has accused of indulging in Muslim appeasement.

On March 27, the day of the first phase elections that were also held in parts of East Midnapore district of which Nandigram is a part, he said, “Pakistanis created trouble in Fulbari area. Pakistanis hurled bombs at the OC (officer-in-charge) of Patashpur police station.”

At another place, a couple of days before, he said, responding to agitations he faced from TMC supporters in Nandigram, “Several Pakistan has developed here. Those who celebrate India’s defeats with crackers and feasts are staging agitations.”

“The TMC is now in the hands of Amirul, Sufiyan, Samad, Sahabuddin, who burst crackers at Pakistan’s victory,” he said on March 22 while addressing a rally at Bhekutia Bazar, adding, “If they return to power, you would not be able to wear tip (bindi on forehead), Konthi (Tulsi beads rosary) and dhoti.”

Travels inside Nandigram revealed why Adhikari is banking so heavily on the polarisation of Hindu votes in the BJP’s favour for his victory.

“No other equation except for communal polarisation can work for him. He has insulted Nandigram and he has stooped unimaginably low,” said Sk Sufiyan, one of the key TMC leaders in Nandigram who is now Mamata Banerjee’s chief election agent.

According to residents and poll strategists of both camps, Suvendu’s ‘palpable desperation’ in creating communal polarisation lies in the statistics given above.

The equations stand as complex as the following: since the BJP had obtained only about 30% votes in the Lok Sabha, Suvendu had to ensure bringing at least 17-18% votes from the TMC’s fold to ensure his victory. But that would prove difficult given that Mamata Banerjee herself is contesting. There was a thin possibility of Suvendu getting the Muslim votes as he had joined the BJP. Besides, there was the fear that a section of the traditional left voters who voted for the BJP in Lok Sabha may return their votes to the Left seeing Suvendu, against whom they fought, as the BJP’s candidate.

The last possibility increased after the Left fielded a gritty, young woman leader, Meenakshi Mukherjee, who is taking her campaign to all corners.

“No nullify all these factors, his appeal to all has been to vote to keep their Hindu identity in mind above all,” said a BJP leader engaged in Suvendu’s election management.

Suvendu Adhikari has his popularity in Nandigram and no one denies that he will bring a section of the TMC’s vote base to the BJP’s fold. At several villages, people said it was Adhikari who mattered to them most, who stood by the area in all needs, who looked after its people in all seasons.

“His popularity cannot be denied. He knows Nandigram as good as his palms. He has his men in all booths,” said Bhabani Das, a leader of the Socialist Unity Centre of India (SUCI), who had coordinated with Adhikari during the 2007-08 agitation against the proposed land acquisition that shot Nandigram into national fame.

During that agitation, SUCI was part of the Bhumi Uchchhed Protirodh Committee, or BUPC, a multi-party forum that spearheaded the movement. Maoists were also part of BUPC.

One stumbling block towards Hindu consolidation in the BJP’s favour seems to be women, a majority of whom seemed to be more favourable towards Mamata Banerjee. Besides, not all Hindus were pleased with Suvendu’s campaign.

“Sk. Sufiyan and Abu Taher used to be Suvendu’s two hands in Nandigram. Now that they have not left the TMC with him, he has started calling them Pakistanis,” said an irate Gobinda Bera, a Trinamool Congress supporter and resident of Sonachura.

Travels through Muslim-dominated areas such as Shamshadabad, Kendamari, Daudpur and Amdabad revealed very little existence of the BJP’s flags. The TMC’s flags dominated these areas, while flags of the CPI(M) and its alliance partner, the Indian Secular Front of Islamic cleric Abbas Siddiqui, were also seen. Nevertheless, the CPI(M) candidate, too, suffered obstacles from TMC leaders while campaigning in Daudpur.

Along the high roads at many stretches, cut-outs of Suvendu Adhikari have outnumbered those of Mamata Banerjee and the BJP flags those of the TMC’s. There are a significant number of Narendra Modi’s cut-outs, too. Besides, long stretches of the Chandipur-Nandigram road had been covered in tri-angular saffron flags with Om written on them in Sanskrit.

Mamata Banerjee had spent a day and a half at the beginning of this month until prematurely botching her trip due to the injury that has left her wheelchair-bound since then. She returned to Nandigram on March 28 and plans to stay there till April 1, the polling day.

Taking charge of her campaign, Rajya Sabha MPs Sukhendu Sekhar Roy and Dola Sen and former minister Purnendu Bose are camping in Nandigram. Of them, Sen and Bose had been associated with the BUPC-led movement as leaders of a small Naxalite outfit and it was during their association with Mamata Banerjee while taking part in the movement that they joined the TMC.

Now, they are trying to revive among the people the memories of the historic movement that played an instrumental role in paving Mamata Banerjee’s way to power.

For Suvendu, the BJP has deployed a battery of leaders and made union petroleum minister Dharmendra Pradhan as Nandigram’s election in-charge. He is camping in Nandigram. A battery of senior leaders have campaigned for him – Yogi Adityanath, Smriti Irani; and if all goes according to plan, Amit Shah will address a rally on March 30.

The TMC’s Sufiyan alleged that the petroleum minister was given the charge so that he would garner the support of the industrialists in the neighbouring Haldia industrial belt. Haldia is most known for the Haldia Petrochemicals, one of India’s largest petrochemical companies.

The TMC’s campaign against Suvendu has also focussed on launching personal attacks on the Adhikari family, which included Suvendu’s father, the octogenarian Kanthi MP Sisir Adhikari who followed his son to the BJP, and younger brother-cum-Tamluk MP Dibyendu Adhikari, who too followed Suvendu and Sisir. The latest slogan that the TMC workers are spreading in the area is Chor Chor Chotta, Sisir Babur Chheleta (Here goes the thief, the son of Sisir).

The slogan carries the essence of the TMC’s main campaign against the Adhikari family: that they joined the BJP to save themselves from investigations in corruption that they indulged in during the family’s hold over this district.

A certain resonance to Adhikari's campaign was also visible. "This time, it's Jai Shree Ram!" said a band of local youth from the Reyapara area who had been with the TMC as long as Suvendu was.

Suvendu's father Sisir has repeatedly said that Mamata Banerjee has chosen Nandigram as her seat "to politically finish Suvendu off". This appeared to be his bid to gain sympathy and it seemed to have struck a chord with a section of residents who have benefitted from Suvendu's involvements with Nandigram.

On her part, by choosing one of the toughest seats in the state for the party for herself, Mamata Banerjee has taken up one of the toughest electoral challenges of her life. The last time she lost an election was in 1989. In South Kolkata Lok Sabha, which she represented since 1991, her lowest winning margin was 98,000 in 2004. Her battle from Bhawanipur Assembly seat in 2011 and 2016, too, was nothing more than a cakewalk.

But here is a land where the friend has turned into the foe and trying to hit her where it hurts the most.

“It is certainly one of the toughest electoral challenges of her life,” said psychologist Biswanath Chakraborty, a professor of political science at Rabindra Bharati University in Kolkata.