A local claimed the migrant workers were demanding that they be allowed to go back to their native places. 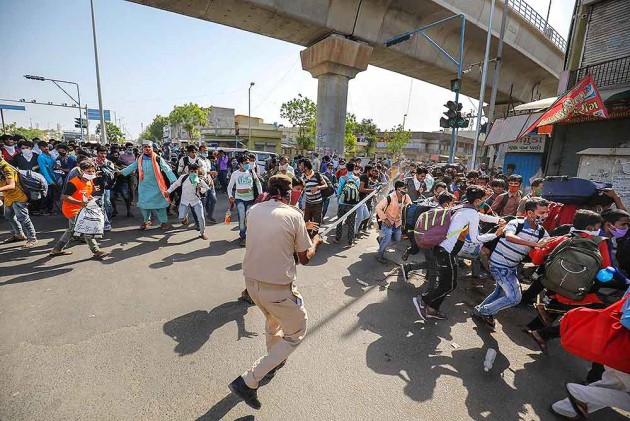 Nearly 100 migrant workers gathered on a busy road connecting IIM Ahmedabad with Vastrapur area here on Monday and pelted stones at police and people passing by during the lockdown, an official said.

A local claimed the migrant workers were demanding that they be allowed to go back to their native places.

Nearly 100 migrants suddenly came on the road in the morning and engaged in indiscriminate stone-pelting, he said.

They hurled stones at the police and people passing by in vehicles, he said.

On getting information about the incident, a large police force was rushed to the spot.

The police lobbed teargas shells to disperse the mob and brought the situation under control, the official said.

Combining operation was underway at a labourers' settlement nearby to nab the culprits hiding in the area, he said, adding several suspects were detained from the spot.

A policeman wields his baton to disperse protesting migrant workers, during the ongoing COVID-19 nationwide lockdown, in Ahmedabad.