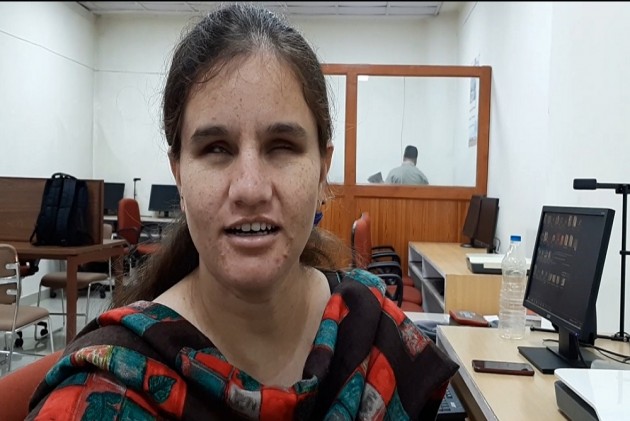 “I was born blind. Initially, as a playful child, I thought everyone was like me. But, as I grew-up in a joint family, a reality unfolded before my eyes -- I am different, differently abled , or visually impaired. Now, 25 years and pursuing a PhD in music, I can feel a different enlightenment -- an accomplishment of a dream, which as a normal person I could not have achieved for sure, ” says Muskan, social activist and research scholar at Himachal Pradesh university, Shimla.

Muskan has been named a ‘youth Icon’ by the Election Commission (EC) for enhancing electoral participation in the next year’s assembly polls in Himachal Pradesh, slated at the end of 2022.

Born in a small remote village at Chirgaon –a mountainous belt of Shimla, Muskan –a winner of several awards and honours for her outstanding singing talent, was earlier EC’s ‘Youth  Icon’ in  2017 Assembly polls and 2019 Loksabha elections as well

“I have been travelling to schools and institutions, interacting with students, youths, men and women in the villages to enhance their participation in the polling, and also educate them about the power of a vote. The persons like me (visually impaired) also had an opportunity to be an ambassador of such a cause. I feel really elevated,” she admits.

Initially, Muskan –as she was growing-up at her native place, had no idea how her life will shape-up. But, her family, she admits, had been a powerhouse of motivation.

“I was sent to Kullu, nearly 230 km from home, for schooling in a special school for visually impaired children. It was here our teacher – Beli Ram Koundal, discovered my singing talent,” she recalls.

Muskan says she used to cry when she had to go back to school after holidays, Her parents would promise to visit her frequently and also remind her of her dream to be a role model for persons with disabilities.

Asked about her rise from a differently abled child to a youth Icon, she says, “Now I feel I would not have reached here if my parents had heeded to my emotional cries.”

“Today I am a Post-graduate girl,  UGC’s NET qualified –not once but twice. I have also cleared the State Level Eligibility Test for Assistant Professorship. Now, I am pursuing Ph.D to fulfill my dream to become a professor of Music. The computer and other new age tools for visually impaired students are a big support.”

"But social work and helping others is my passion. Recently I donated blood for the first time to save someone's life. "I think lack of sight is not an issue if you have a vision,” says Muskan, smiling

Vice Chancellor of Himachal Pradesh University Prof. Sikander Kumar says Muskan is making her own mark in academics and girl empowerment. “ I congratulate her for the new honour and wish her well in the future,” he says

“She has defied her visual disability by her talent, hard work and proper use of computers installed at the Accessible Library of our university, for study. We are providing every support to the disabled students who are striving hard to achieve their goals,” he says.

Chairman of Umang Foundation Prof Ajai Srivastava, who is also the state Coordinator for Accessible Elections, said Muskan, like in the previous two elections, will motivate the voters, particularly the youth to participate in the poll process and cast their votes.

Srivastava, particularly, has been instrumental in getting dozens of visually impaired girls and youths in the colleges and also university to study along with normal children.

Muskan had cast her vote in the last two elections by using braille signage on EVM and her slogan was, "when I can cast my vote, why can't you?”

She uses facebook, Instagram, Whatsapp and other social media platforms through talking software. She visited the USA on a fellowship in 2018 and participated in concerts in five states.

Muskan congratulates Para-olympians including Nishant Kumar and others who have come back with medals and appeals to the state government to frame a policy for all specially abled youths to promote their talents.