Almost all opposition parties except the Biju Janata Dal and the Communist parties attended the rally. 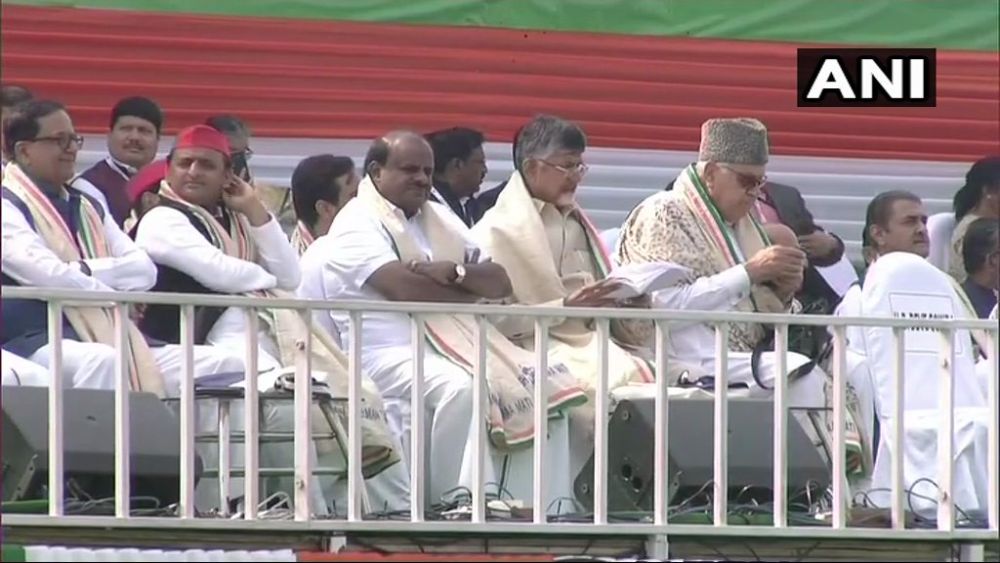 Addressing a huge gathering at the mega rally in Kolkata on Saturday, Trinamool Congress chief and West Bengal chief minister Mamata Banerjee said the Narendra Modi government's expiry date is over and it is time for a new morning for the nation. Almost all opposition parties except the Biju Janata Dal and the Communist parties attended the rally.

"It is the soil of Bengal that has shown the way, even before Independence. West Bengal has always led the way," said Banerjee.

"When you have not spared anyone, including all those politicians on this stage, then why should we spare you?" asks Mamata Banerjee.

Tens of thousands of enthusiastic workers and supporters, including a man on a wheelchair, attended the mega anti-BJP rally at the historic Brigade Parade ground raising their voices against Prime Minister Narendra Modi.

Most of their sloganeering were centred around Modi, BJP National President Amit Shah and about the party's rule "finishing" in 2019.

"Only few hours to go for the historic 'United India Rally' at the Brigade Parade Grounds. I welcome all national leaders, supporters and lakhs of people to participate in today's rally to pledge to build a stronger, progressive and united India #UnitedIndiaAtBrigade," Banerjee, who is also the TMC chief, said in a tweet.

Only few hours to go for the historic 'United India Rally' at Brigade Parade Grounds. I welcome all national leaders, supporters and lakhs of people to participate in today's rally to pledge to build a stronger, progressive and united India #UnitedIndiaAtBrigade

Congress president Rahul Gandhi too has extended his support to the rally. Leader of Opposition in the Lok Sabha Mallikarjun Kharge and Abhishek Manu Singhvi were seen at the rally.

Large-scale preparations have been made to ensure that the rally turns out to be massive success. Besides the huge stages, 20 watchtowers have been erected and 1,000 microphones and 30 LED screens put up so that the spectators can see the leaders and hear them speak clearly.

As many as 10,000 security personnel will be deployed in and around the venue of the rally and around 400 police pickets have been set up to ensure foolproof security, the police said.

Lakhs of TMC supporters and workers have started arriving in the city from all over the state.

Vehicular movement around the venue has been restricted, the police said.