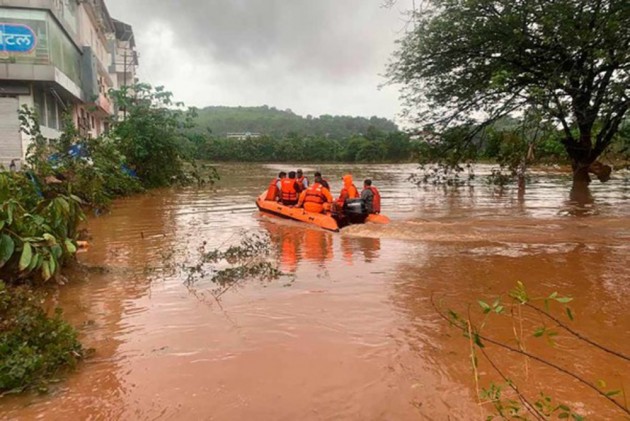 The intensity of torrential rains reduced over Maharashtra’s Satara district on Sunday, even as the death toll due to various rain-related incidents rose to 28 by late evening yesterday, officials said adding that as many as 14 people are still missing.

The district witnessed multiple landslides this week as monsoon rains wreaked havoc in the region. According to officials, as of Saturday night, 11 bodies were recovered from Ambeghar village after a landslide there, six from Mirgaon village and four from Dhokawale village.

Normal life has been thrown out of gear in the region, with traffic remaining suspended on the Mumbai-Bengaluru highway as a stretch in neighbouring Kolhapur is still inundated, officials said. As many as 379 villages have been flooded in Satara district. As per the local administration, about 50,000 people have been evacuated.

Satara Superintendent of Police (SP) Ajay Kumar Bansal said, "The search operation for those missing has begun since morning. We will be able to complete the operation by noon. Since last evening, there is relief due to less or no rain which will help in speeding up the search operation."

As many as 41 bodies have been recovered at Taliye village in Raigad where a landslide struck on Thursday. Several others are still missing, Deputy Inspector General of Police (Konkan) Sanjay Mohite told PTI.

In Kolhapur also, the rainfall activity ebbed and the water level of the Panchganga river at Rajaram weir came down to 52 feet, but it was still flowing above the danger mark of 43 feet, as per the district disaster cell.

"The vehicular traffic remained suspended on the Mumbai-Bengaluru highway as the stretch near Shiroli village continued to be inundated,” Kolhapur SP Shailesh Balkawade said.

District Guardian Minister Satej Patil on Saturday said over 74,000 people were shifted to safer places from the flood-hit regions.

Six teams of the NDRF and a column of the Army were carrying out rescue operations in the flood-hit areas.

In neighboring Sangli district, the Krishna river at Irwin bridge was flowing at 54.5 feet, as against the danger mark of 45 feet, according to the local administration.
(With PTI inputs)