The video was apparently shot sometime in 2016 when Madhukumar, an IPS officer known to enjoy the confidence of CM Shivraj Singh Chouhan, was posted as the IG of Ujjain Zone. 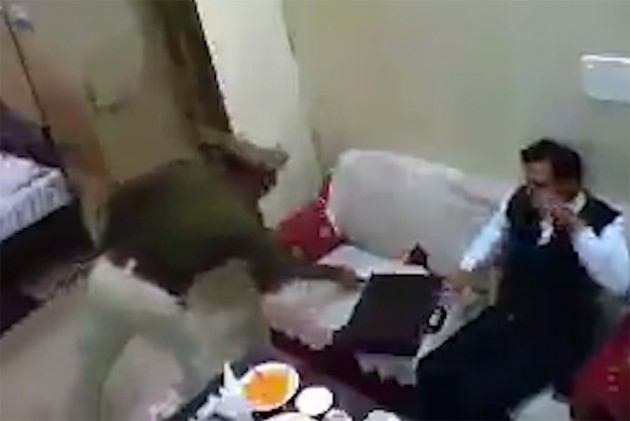 The video was apparently shot sometime in 2016 when Madhukumar was posted as the IG of Ujjain Zone. Over the past four years, Madhukumar had served in various important positions, including Additional Director General (ADG) of Police in-charge of the state's Economic Offences Wing (EOW) as well as ADG in-charge Special Police Establishment in the MP Lokayukta.

The 1991 batch IPS officer, known to enjoy the confidence of chief minister Shivraj Singh Chouhan, was posted as Transport Commissioner presently. After the video went viral across various social media platforms on Saturday, Madhukumar was transferred as ADG at the Police Headquarters in Bhopal without charge of any department.

Though the IPS officer has refused to comment on the controversy, it is widely speculated that the video was clandestinely shot when Madhukumar, as IG Ujjain, was staying at the circuit house in Agar Malwa during an official visit back in 2016.

In the video, the officer can be seen sitting in a room with a briefcase next to him. During the five-minute-long video, several junior police officers - apparently from different police stations within the Agar Malwa district - come into the room one by one and give the officer an envelope. The officer can be heard asking each policeman if "everything is alright" and then placing the envelope in the briefcase after writing something on it. What is in these envelopes is, however, not shown.

Why a video, supposedly shot four years ago, has suddenly come into wide circulation is not known. The state's transport minister Govind Singh Rajput, one of the 22 Congress MLAs loyal to Jyotiraditya Scindia who had joined the BJP in March, said that an enquiry has been ordered. Rajput told reporters that he had spoken to Madhukumar about the video. "He said he was merely taking reports from different police stations... An enquiry has been ordered and a thorough investigation will be carried out," Rajput said.

Meanwhile, the state government has begun the search for a new Transport Commissioner. Sources say Rajput is pushing for the appointment of an officer who has previously served in Gwalior and is known to be close to Scindia.