The election process, spread across seven phases and 71 days, was one of the most bitterly fought in recent memory. 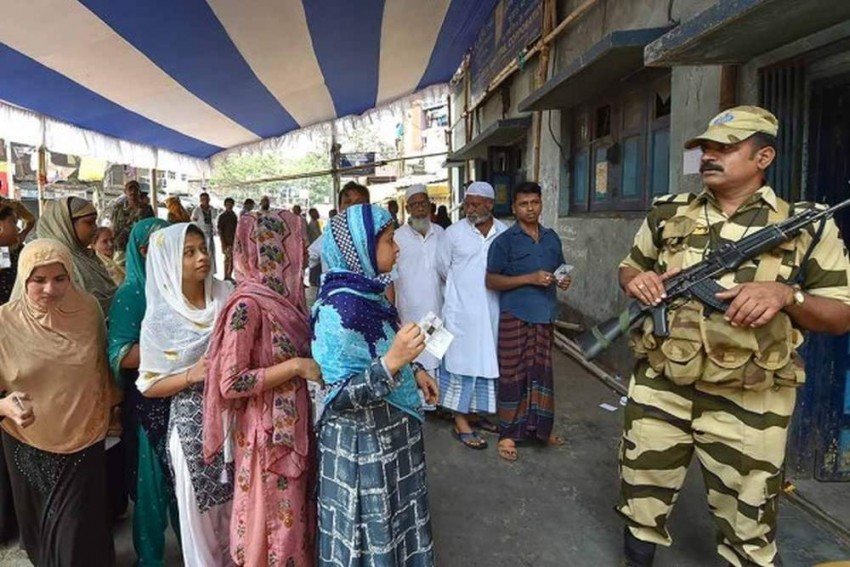 The seven-phase Lok Sabha elections came to a close today. The election process, spread across seven phases and 71 days, was one of the most bitterly fought in recent memory.

The results will be declared on May 23.

Prime Ministre Narendra Modi is running for a second term and contesting from Varanasi. Congress president Rahul Ganhdi is contesting from two seats- Amethi in Uttar Pradesh and Wayanad in Kerala.

Around 90 crore people were eligible to vote in this year's Lok Sabha elections.

5:52pm: Polling has concluded in 542 parliamentary constituencies across states and union territories.

#WATCH: 102-yr old Shyam Saran Negi, 1st voter of Independent India, cast his vote for #LokSabhaElections2019 in Kalpa, Kinnaur earlier today. He was welcomed by officials with traditional folk music. He had cast the first vote in the 1951 general elections. #HimachalPradesh pic.twitter.com/IgaghNgykr

4:07 pm: Bihar Police official on polling duty allegedly attacked for stopping bogus voting at polling booth 49 in Arrah. ADM said, "We received information of stone pelting but there has been no disturbance in voting, some people might have tried to create trouble, they've been chased out".

3:15 pm: According to BJP's North Kolkata candidate Rahul Sinha, a crude bomb was hurled near Girish Park in the constituency around noon.

2:55 pm: Polling in Bihar's Patna was stopped at booth number 101 & 102, Sarkuna village of Paliganj after a clash broke out between two groups.

2:03 pm: Anupam Hazra, the Bharatiya Janata Party (BJP) candidate from West Bengal's Jadavpur seat, and a party leader accompanying him were attacked and the latter's car damaged after the two visited a booth on receiving reports of rigging.

Estimated voting percentage till 11 am:

Crude bombs were hurled at Raidighi in Mathurapur and voters were allegedly threatened by the activists of the state's ruling Trinamool Congress while a Bharatiya Janata Party (BJP) camp office was set ablaze in Rajarhat under the Barasat constituency.

CPI-M North Kolkata candidate Kaninika Bose (Ghosh) alleged that polling agents were beaten up and not allowed to sit inside the booths. She staged a protest demonstration in Belgachia demanding intervention of security personnel.

In Basirhat, the BJP's Sayantan Basu and CPI candidate Pallab Sengupta alleged their polling agents were not allowed to sit at 650-700 booths.

Trinamool's Kolkata South candidate Mala Roy alleged that she was not allowed to enter a polling booth at Mudiali by the central forces after an EVM failure at the concerned booth was reported.

11:18 am:  Lok Sabha Speaker and BJP leader Sumitra Mahajan cast her vote at a polling booth in Indore, Madhya Pradesh.

11:15 am: BJP Lok Sabha candidate from South Kolkata constituency CK Bose says TMC workers are behaving like 'terrorists'. "Last night, I was getting calls from my workers from different booths that they have been threatened by TMC's  'jihadi' brigade that if you sit as booth agents for BJP, you'll be murdered. There's no difference between a terrorist organisation and TMC," Bose told ANI.

10:58 am: The constituency of Prime Minister Narendra Modi, Varanasi, recorded 10.87 per cent polling till 9 am. In this constituency, 18.54 lakh electorates will cast their votes in 1,819 polling booths, of which 273 are categorised as 'critical'.

10:10 am: Only 8.04 per cent voting was recorded in the first two hours of polling to Uttar Pradesh's 13 parliamentary constituencies in the seventh and last phase of the general elections.

9:31 am: An estimated 10.48 per cent of the total 45,64,681 voters exercised their franchise till 9 am in the final phase of polling for the three Lok Sabha seats in Jharkhand, an Election Commission official said.

9:00 am: Voting delayed at 3 booths in Nagerbazar area (DumDum) of West Bengal. (PTI)

8:55 am: Union Minister and BJP leader Ravi Shankar Prasad casts his vote at booth no. 77 in Patna Women's College, Bihar.

7:52 am: EVM malfunction reported in Bihar at a booth in Pant Nagar of Patna Sahib (Lok Sabha constituency).

7:30 am: Bihar Chief Minister Nitish Kumar casts his vote at polling booth number 326 at a school in Raj Bhawan, Patna.

7:05 am: Uttar Pradesh Chief Minister Yogi Adityanath exercises his franchise at polling booth no. 246 in Gorakhpur.