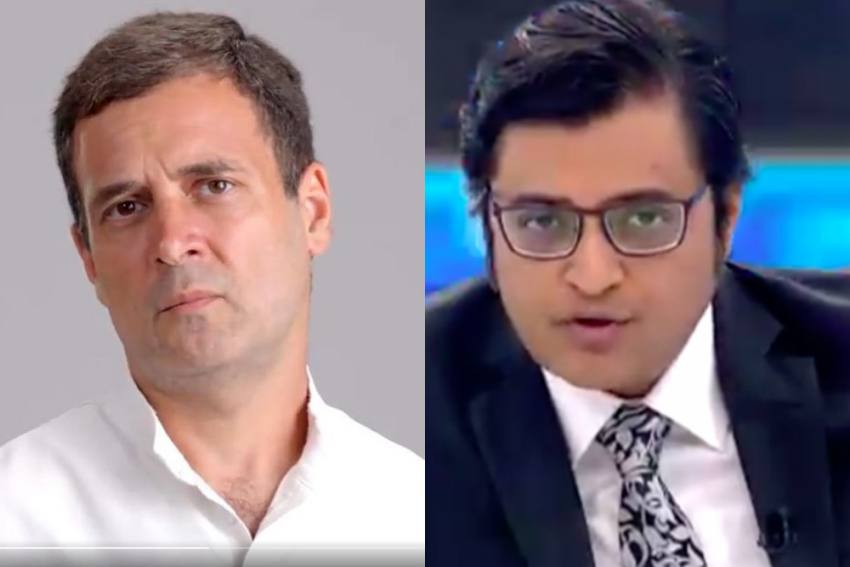 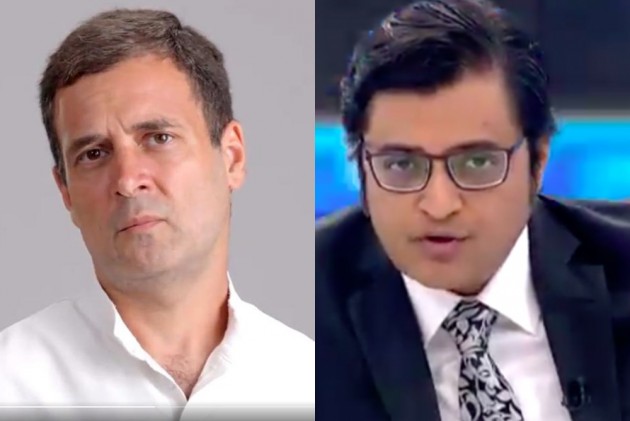 A day after Rahul Gandhi set the tone for his party’s broadside on the sensational WhatsApp chats between Republic TV owner Arnab Goswami and former BARC CEO Partho Dasgupta, the Congress party, on Wednesday, went all out to insinuate a direct nexus between Prime Minister Narendra Modi and the journalist.

The Grand Old Party’s blitzkrieg took off from Rahul’s allegation – made at his press conference on Tuesday – wherein he had suggested that prior information about the Balakot air strike plan could have been known only to the Prime Minister, home minister, defence minister, Air Force chief and the National Security Advisor. Rahul had suggested that “only one of these five” could have leaked the information to Goswami three days before the airstrike and wondered whether it was Modi.

On Wednesday, the Congress fielded party veterans AK Antony, Ghulam Nabi Azad, Sushil Kumar Shinde and Salman Khurshid – all former Union ministers – and spokesperson Pawan Khera to amplify the offensive. The leaders addressed different aspects of the leaked WhatsApp chats between Goswami and Dasgupta with regard to the Pulwama attack and the Balakot airstrike, Goswami’s access to Modi, the PMO and Union home minister Amit Shah, manipulation of the TRP system and the judiciary and even certain remarks made in the chats by Goswami against the late Arun Jaitley.

“Never before has India’s national security been so completely compromised. Never before have offices of the Prime Minister, the Home Minister, the Law Minister, the Information and Broadcasting Minister, been so brazenly compromised. Never before did our judiciary come under such an attack. Never before has a senior leader been divested of his dignity in his death,” the party said. Questioning whether Modi, Shah and their government “have any moral, political, constitutional right to continue in office after such damning revelations,” the party also demanded that the Prime Minister must “come clean on these accusations immediately in order to restore the severely damaged credibility of the highest office of the country.”

“The contents of the leaked chats between Arnab Goswami and Partho Dasgupta are a serious concern for the entire nation... It is clear that classified information concerning national security and the most sensitive secret airstrike were with people who were not authorized to know it. Three days before the Balakot strike, how did a journalist have access to details of the operation? The leak of an Official Secret is a criminal Act; leaking secrets about military action are treason – it’s an anti-national activity. Whoever is involved has to be punished for treason – this needs an immediate enquiry. Those involved in the leak deserve no mercy,” said former defence minister AK Antony.

Responding to questions on how the Congress and other Opposition parties plan to corner the government on issues related to the leaked WhatsApp conversations, Leader of Opposition in the Rajya Sabha said that his party will speak to other Opposition parties on the issue soon. Azad cautiously sidestepped a question on whether the Congress will demand an enquiry by a Joint Parliamentary Committee into the scandal and said. “A JPC cannot be unilaterally announced by one party… (budget) session of Parliament will start in nine days and we will discuss this issue (of a JPC probe) with other parties.”

Alluding to repeated assertions by Goswami in the WhatsApp chats about his proposed meetings with Modi to discuss various matters, Congress spokesperson Pawan Khera also posed a series of questions. “The confidence with which Arnab Goswami flaunts his proximity with the Prime Minister and his office is shocking. From the chats, it appears that Arnab Goswami shared very comfortable access with the Prime Minister and secured his intervention in overcoming business troubles and fixing rivals. Why was the Prime Minister allowing Goswami such friendly access to himself and his office? What was the quid pro quo,” Khera asked.

The Congress also posed a series of questions concerning Amit Shah’s alleged nexus with Goswami. Referring to Goswami’s purported claim of seeking Amit Shah’s intervention “to influence policy and controlling the Telecom Regulatory Authority of India (TRAI)”, Khera said these chats happened prior to 2019 when Shah was not part of the Union cabinet and was just the national president of the BJP. “How can the President of a party so brazenly interfere in policy matters to help a media house at the expense of others? Why was Amit Shah interfering in the functioning of a supposedly autonomous authority called the “TRAI,” Khera said.

The Congress also pointed at a purported chat between Goswami and Dasgupta in which the duo are discussing the possibility of ‘buying a judge’. Asserting that the Congress party has respect for the courts as the “entire country depends on the temples of justice to seek redressal for grievances”, former law and external affairs minister Salman Khurshid said, “If powerful people of the country are seen influencing the judiciary, the faith of the common citizen will stand eroded in the judicial delivery system.” Khurshid said that while the entire country was awaiting an “appropriate response from these institutions (the judiciary), which this influence peddler (Goswami) is so shamelessly talking about,” it must also be enquired whether a favourable verdict was “secured” as was discussed in the leaked chats and if a purported meeting with the then Union law minister (also mentioned in the leaked chats) “have something to do with securing a favourable verdict by influencing the judiciary… has the BJP and its lackeys attempted to bribe or threaten other judges to secure favourable verdicts?”