The comments by the External Affairs Ministry came in response to China's contention that it does not recognise the union territory of Ladakh as well as the state of Arunachal Pradesh. 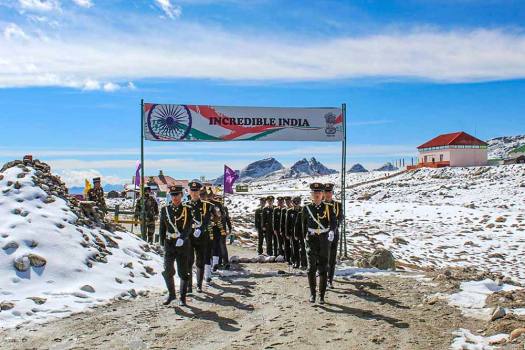 India on Thursday asserted that the union territories of Jammu and Kashmir and Ladakh "have been, are, and would" remain an integral part of the country, insisting that China has no locus standi to comment on its internal matters.

The comments by External Affairs Ministry Spokesperson Anurag Srivastava came in response to China's contention that it does not recognise the union territory of Ladakh as well as the state of Arunachal Pradesh.

"Our position on this has always been clear and consistent. The union territories of Jammu and Kashmir and Ladakh have been, are, and would remain an integral part of India. China has no locus standi to comment on India's internal matters," Srivastava said at a media briefing.

"We hope that countries will not comment on India’s internal matters, as much as they expect the same of others," he added.

Srivastava also said that Arunachal Pradesh is an "integral and inalienable" part of India.

After Defence Minister Rajnath Singh inaugurated a number of new bridges in certain border areas on Monday, a Chinese foreign ministry spokesperson said China does not recognise the Ladakh union territory "illegally set up" by India as well as Arunachal Pradesh.

The Chinese spokesperson had also claimed that the development of border infrastructure by India was the "root cause" of tensions between the two countries.

On the border standoff in eastern Ladakh and the outcome of the bilateral military talks, Srivastava referred to a joint press statement issued by the two armies after their dialogue on October 12, calling the meeting "positive and constructive".

"Disengagement is a complex process that requires redeployment of troops by each side towards their regular posts on their respective sides of the LAC," Srivastava said.

"To achieve this, the two sides will maintain the current momentum of communications based on the guidance of our leadership to not to turn differences into disputes and work towards a mutually acceptable solution for complete disengagement in all the friction areas along the Line of Actual Control(LAC) and restoration of peace and tranquillity in the India-China border areas," he added.