Kullu Deities To Skip A Bleak Dussehra Amidst COVID Scare

Only 100 people can pull the famous chariot of Lord Raghunath, cultural functions and exhibitions face ban. 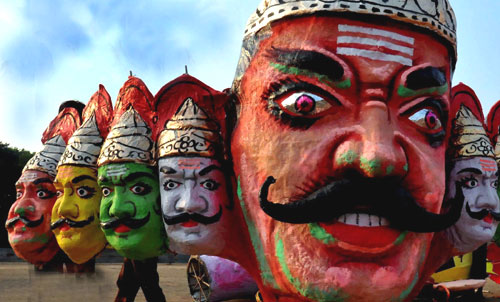 Lord Raghunath Rath Yatra — the centuries-old Dussehra tradition that made ancient Kullu popular almost globally,  will be reduced to a symbolic ritual this year due to the pandemic.

The weeklong Kullu Dussehra, which begins on October 25,  will miss much of its colours, enthusiasm, rituals and most importantly, the presence of 300-odd Deities /Devats –who used to be officially “invited” to be part of lord Raghunath’s Rath yatra. The deities — the Gods and Goddesses of Kullu -- used to camp for seven days till the return of the Lord Raghunath's rath back from the Dussehra ground.

The most noticeable change proposed in the Dussehra celebrations will be seen in Lord Raghunath’s fascinating Rath Yatra, which used be to pulled by thousands of enthusiastic devotees at Kullu's famous Dhalpur Maidan. This year,  the number of persons pulling the chariot has been fixed at 100.  The Dussehra Celebrations Committee, headed by Education Minister and  MLA from Manali Govind Thakur,  has also ordered that none of these 100 chariot pullers can enter the historic Dussehra ground without a mandatory COVID-19  test.

“No invitations will be sent to the Devtas, who descend from all over Kullu district travelling miles of foot journey along with their followers and caretakers. The Devtas, approximately 300 to 350 reaching Dussehra, have remained as part of the tradition. Now, the committee under Corona protocols has chosen to invite only seven without whose presence Dussehra rituals can’t begin,” Maheshwar Singh a scion of Kullu royalty and Chief Kardar of Lord Raghunath, told Outlook. Even these Devtas will not be physically present, but be represented by their symbols.

Singh says he has suggested that the Education Minister and also District Commissioner Kullu Dr Richa Verma  hold informal consultations with the ‘kardar Sangh’—a representative body of all local deities/devtas —  before taking a final call.  He said that sometimes the Deities (speaking through their oracles) refuse to follow the administrative orders, leading to a chaotic situation.

Dr Verma admitted that the committee’s proposals are not final, and a decision will later be taken at the government level to see how best the festival can be hosted given the pandemic.

“We are seeing a spread. When such a mob of devotes assemble it becomes tough to enforce the guidelines strictly. I hope the traditions are maintained with minimum presence of the people who are really required to carry out those rituals, resolving to maintain social distancing,” she said.

The Kullu administration has also decided to cancel cultural evenings, trade fairs and other exhibitions–cum-sales that were an integral part of the festival, with locals going on a festive shopping spree and tourists, including foreigners, becoming an active part of the celebrations.

But the pandemic has changed all that. The temples and shrines in Himachal Pradesh were opened only a fortnight ago under stringent guidlines. Kullu Dussehra also used to witness animal sacrifices at the end of the celebrations till 2014, when the  Himachal Pradesh High Court imposed a complete ban on any killing of the animals or birds as ‘ritual’ .i

Dussehra‘s history in Kullu dates back to the 17th century when local King Jagat Singh installed an idol of Raghunath on his throne as a mark of penance. After this, Raghunath was declared as the ruling deity of the Valley. The State government has accorded the status of the International festival to the Kullu Dussehra, which attracts tourists in large numbers.