Kerala: Infighting In Congress Deepens As ‘Group Politics’ Comes To The Fore 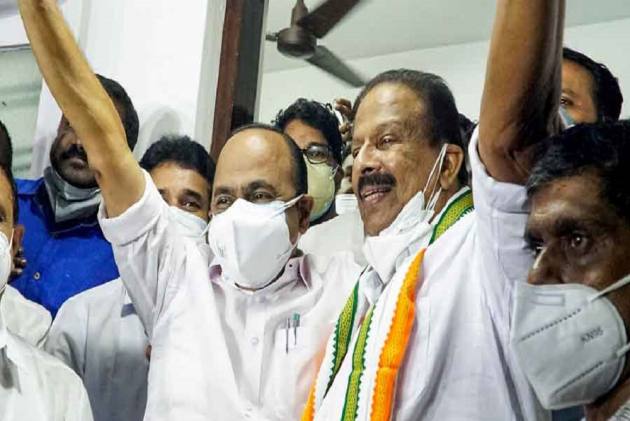 As the central leadership of the Congress is grappling to douse dissent within the Punjab and Chhattisgarh units, Kerala is posing another daunting task for the party. The immediate context of the current crisis is the announcement of the new district committee (DCC) presidents.

Flaying the state leadership, former chief minister Oommen Chandy and former opposition leader Ramesh Chennithala has openly expressed their reservations over the selection of DCC presidents. Oommen Chandy’s public outburst against the state leadership is seen as a revolt of the ‘A and ‘I’ groups, the dominant factions of the party, which was in the driver’s seat for many years.

“My name was dragged into the issue unnecessarily, “ said Chandy.

The dissent within the ranks was intensified after the state leadership suspending senior leaders K Sivadasan Nair and K P Anilkumar for going public against the party. Senior Congress leader and KPCC member A V Gopinath later resigned from the party.

Oommen Chandy and Ramesh Chennithala, the leaders of ‘A’ and ‘I’ groups, say that the reorganizations were done in an arbitrary manner without any consultation. The suspended leaders have the backing of the A and I group of the party.

However, party state president K Sudhakaran contests the claims of the leaders saying that he had held separate discussions with both leaders regarding the candidates and asked them to submit a list of their choice. Speaking to reporters, Sudhakaran said that he didn’t receive the final list of candidates from the leaders. He also questioned the leaders’ propriety as they never functioned in a transparent way during their tenure. Sudhakaran, known for his aggressive style of functioning, also emphasized his commitment to function beyond group politics.

K Sudhakaran’s appointment as KPCC president in June was seen as an attempt by the High Command to end the rampant group politics in the state unit, overstepping the two formidable ‘A and ‘I ‘group leaders. While the ‘A' group is headed by former Chief Minister Oommen Chandy, ‘I camp is led by former opposition leader Ramesh Chennithala.

Along with Sudhakaran, five-time MLA VD Satheesan was appointed as the Leader of Opposition, in an effort to instill new faces in the faction-ridden state unit. It’s an open secret that both the appointments were made at the behest of AICC General Secretary K C Venugopal. The move was also seen as senior leader Rahul Gandhi’s push for a generational shift in the state unit. However, both the A and I factions felt let down as both camps were lobbying for their leaders to continue in the posts.

A senior Congress leader belonging to the ‘A ‘group tells Outlook that the rift will further widen if the state leadership with the blessings of KC Venugopal continues to sideline the group leaders.