The controversial advertisement cautioned against a housemaid kneading flour to make dough, claiming that 'her hands might be infected'. 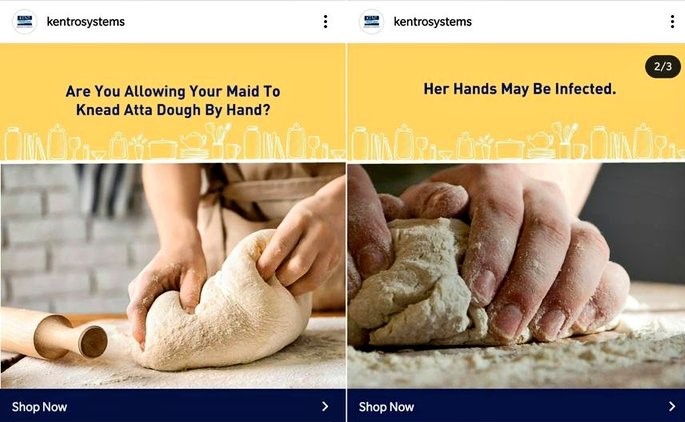 Kent RO, one of India's leading water purifier brands, on Wednesday apologised and withdrew an advertisement for an 'Atta and Bread Maker' after it received massive backlash for being "classist" and "misogynist".

The Noida-based firm's advertisement for its new product, which featured Bollywood superstar and BJP MP Hema Malini and her daughter Esha Deol, cautioned against a housemaid kneading flour to make dough, claiming that "her hands might be infected", and instead suggested using the company's product for the same purpose.

The advertisement didn't go down well with many on the social media who accused the brand of being "classist", "discriminatory" and also dehumanising the domestic help.

While being stuck without our 'kaam-wali' didis during the #lockdown, we cannot thank them enough for being super-humans & taking care of us, cause without them our everyday is a chore & then there's Kent that makes such a sick, classist, discriminatory ads.

While a few called it "revolting", some even advocated boycotting Kent products.

Some also called out actress-turned-politician Hema Malini, who is the brand ambassador for Kent and features in the advertisement. "Such pathetic classist ad by Kent. Bunch of hateful morons promoted by Hema Malini," one Twitter user said.

Such pathetic classist ad by Kent.

Mahesh Gupta, chairman and managing director of Kent RO Systems, issued an official apology saying, "Our recent advertisement of Kent Atta & Bread Maker on social media was unintentional, badly communicated, and was wrong. And therefore, it was immediately withdrawn. We are extremely sorry for this incident and want to apologise to everyone, especially the people whose sentiments were hurt."

The advertisement is contrary to the beliefs and professional standards of Kent, his statement added.

"We will investigate how our advertisement standards were compromised and we will further take corrective and preventive action so that such incidents are not repeated in future," Gupta said adding that "we support and respect all sections of the society and apologise for the mistake".

"Views expressed by the recent advertisement of Kent Atta by  @KentROSystems
do not resonate with my values and are inappropriate," she said.

Views expressed by the recent advertisement of Kent Atta by @KentROSystems do not resonate with my values and are inappropriate, The Chairman has already tendered a public apology for the mistake.I hereby wish to put on record that I respect and stand by all sections of society. pic.twitter.com/i6tY3hJdt8