The state will soon get two flights to bring around 320 workers back from Andamans, a aide to CM Hemant Soren told Outlook. 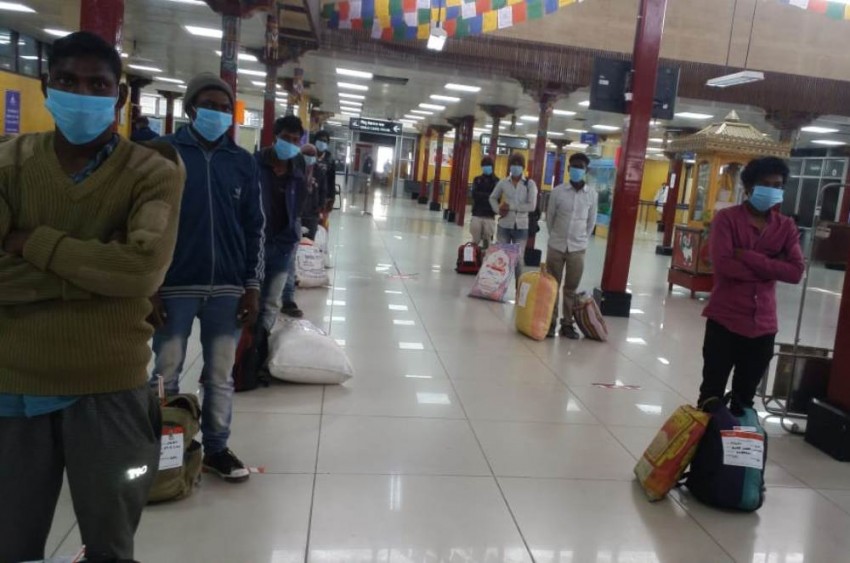 Jharkhand migrant labouers at the Leh airport. They will alight at Delhi and take another flight to Ranchi on Friday.
Preetha Nair 2020-05-29T12:53:57+05:30 Jharkhand First State To Airlift 60 Stranded Migrant Labourers From Leh As CM Soren Steps In 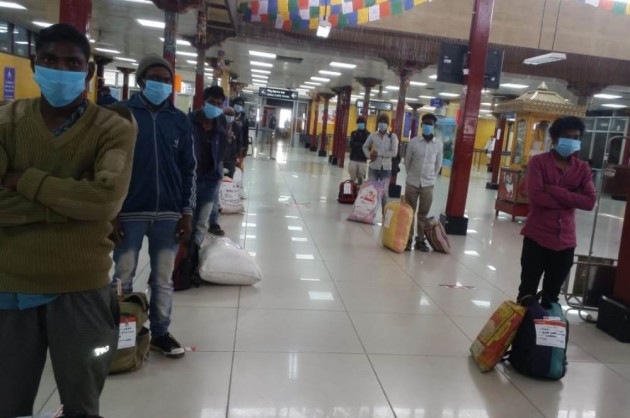 John Paulus Hansda is flying for the first time in his life but he is not nervous about it. For Hansda and 60 other migrant workers, who boarded the SpiceJet flight from Leh to Ranchi, it was a moment of relief after two harrowing months of lockdown.

The six-hour road journey from Batalik to Leh hasn’t dampened the spirit of Hansda and others, who are eagerly waiting to join their families back home in Jharkhand. The migrants, who were working in a BRO project in Batalik-Kargil sector, were stranded in the village following the announcement of the nationwide lockdown in March. The group will alight in Delhi and take an IndiGo flight which will take them to Ranchi. They are expected to reach Ranchi at 8 pm on Friday.

Hansda, who hails from Dumka, thanks chief minister Hemant Soren, who made their return to home possible. By doing so, Jharkhand became the first state to airlift 60 of its stranded people amid the despair and misery of migrant workers reported across the country. The state government will bear the entire expenditure of approximately Rs 8 lakh. Hemant Soren said he would personally monitor the 48-hour coordination.

Upon their arrival in Ranchi, the migrants are most likely to be received by CM Soren himself. They will then be sent to Dumka by buses after necessary screenings. Speaking to Outlook from Leh, Shahul, another worker says, “We are grateful to our chief minister for his efforts in taking us home. All of us are happy that we are going back”.

Jharkhand government’s decision to airlift these migrants came a day after the Supreme Court directed all states to arrange free travel for stranded migrants. The Jharkhand government intervened after migrant workers reached out to CM Soren for help on Twitter.

“After the lockdown, it was difficult for us to survive in Leh without food and money. We never received ration on time and stayed hungry mostly. Twenty-five to thirty people would stay in one tent. It was difficult to travel and there were a lot of restrictions. If the government had not intervened, we would have been in big trouble,” says Hansda.

On May 12, Jharkhand Chief Secretary wrote to Union Home Secretary seeking permission to airlift stranded workers on its expenses. Failing to get any response from the Centre, on May 20, chief minister wrote a follow-up letter to Home Minister Amit Shah. Even this time, he didn’t get any reply.

The Jharkhand government took the matter in its own hands after commercial air operations began on May 25 and it entrusted a small team to work out modalities for the safe return of 60 migrants to Dumka.

Another worker, Shahul, was glad that he would meet his wife and three-year-old daughter after three months. “We faced a lot of problems. I have a small piece of land in my village and will work there. But I will come back here if it gets difficult,” he says.

However, Hansda will now prefer to stay in his native village if the state government provides adequate financial assistance. “If the government helps us with income, I don’t want to come back. In Leh, I used to earn Rs 13,000 and I used to send 10k home,” he says adding he was disillusioned by the plight of migrant workers across the country.

Jharkhand has seen the arrival of over 3.5 lakh migrant workers on special trains, buses and individual vehicles since May 1. The state will soon get two flights to bring around 320 workers back from Andamans, said an aide to the CM.