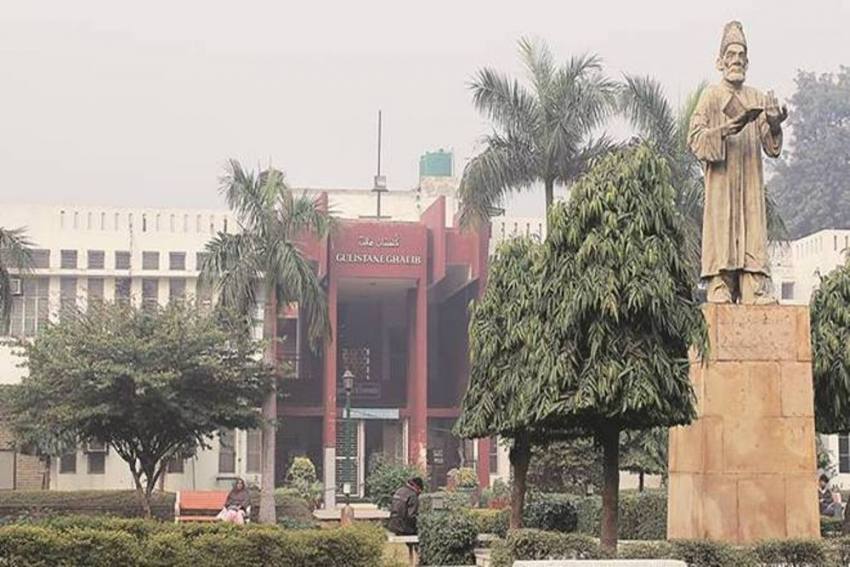 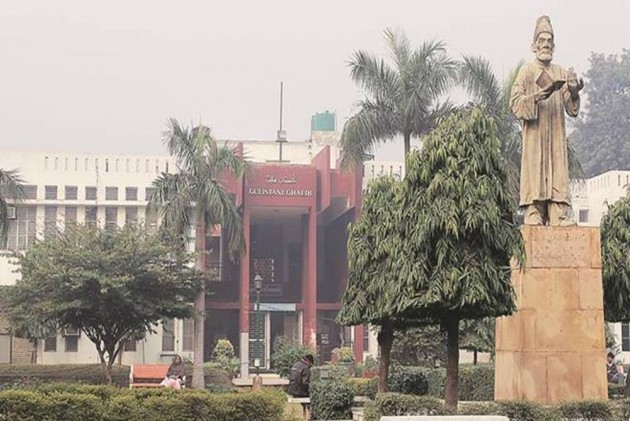 Examination results of students taught by Dr Abrar Ahmad, the Assistant Professor at Jamia Millia Islamia (JMI), who was suspended for allegedly failing "fifteen of his non-Muslim students", show that only one postgraduate couldn't make the grade and that too because he didn't take the exam.

The Professor told Outlook there was no way he could have failed or passed Ranjan in the university examination, for the student had already been marked absent on the day of examination by Jamia administration.

"This could be because either he did not appear for the exam or because his attendance was not sufficient," Ahmad said, adding he hadn't failed a single student.

Ranjan, the said student, told Outlook that he couldn't take the exam because it was conducted after the university reopened in January. On December 14, following the demonstration against the Citizenship Amendment Act (CAA), the remaining exams were postponed and the university declared winter vacation till January 5, 2020.

"I could not go back to the University for exam because I was not sure of the date of the examination," Ranjan said. He rubbished allegations of "discrimination or communalism".

Atul, who failed two other papers, also added that he was busy preparing for some job interview during the time.

Ahmad, before his suspension from duties at the University, taught "Transmission and Distribution Automation" paper to the "Electrical Power System Management" class.

Maqsood, a student in this class, says no test or internal assessment took place in the current semester before the classes had to be called off owing to the nationwide lockdown to contain the spread of Coronavirus.

Another student of Ahmad’s, Abhishek Bahadur Singh, says he had never seen the professor discriminate against any community or misbehave with any student in the class.

Nearly two weeks ago, a tweet posted by Ahmad led to -- first outrage on Twitter and then his suspension from teaching duties at the University.

On March 25, Abrar took to the microblogging site and wrote: “All my students r passed except 15 non muslims, who ve to reappear #CAA. If you protest #CAAProtests, I have 55 students in my favour #caasupport. Majority will teach U lesson if protest not ends #riot. Due to #corona your symbols of protest be erased. I wonder why they hate me? (sic)” The tweet is no longer online, but a screenshot of the same is available below. 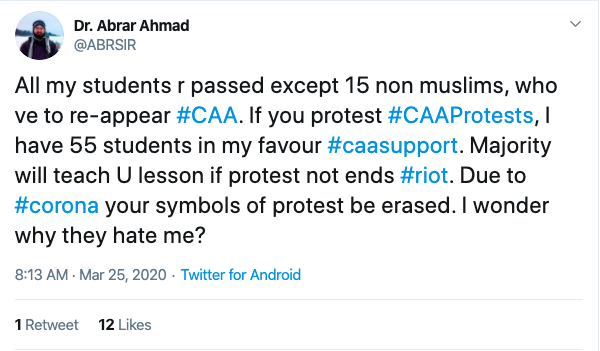 The professor's tweet drew flak from all quarters following which he issued a clarification, saying he doesn't discriminate, adding it was a "Parody to explain #CAA and #CAAProtests how government is discriminating a community (sic)."

“Regarding a post I wrote about an Examination discrimination is Parody to explain #CAA and #CAAProtests how government is discriminating a community. There has been no such examination and no such results. Hold your horses. It is just to explain an issue. I never discriminate,” read his tweet. 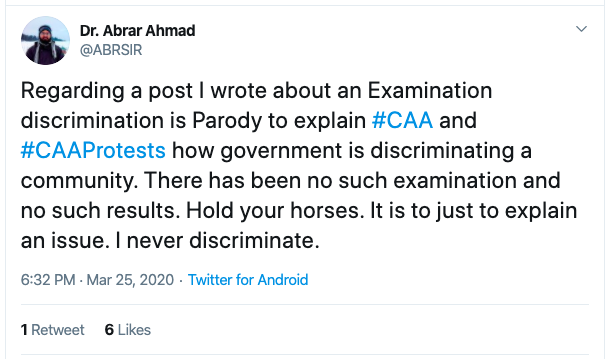 Hours later, despite the clarification, Jamia Millia Islamia, half past midnight on March 25, said that Ahmad was being suspended pending inquiry for "a serious misconduct inciting communal disharmony". The Jamia administration tagged HRD Minister Dr Ramesh Pokhriyal and his ministry in its tweet.

“Dr. Abrar Ahmad, Asstt Professor of @jmiu_official tweeted in public domain as to failing 15 non-muslim students in an exam. This is a serious misconduct inciting communal disharmony under CCS CONDUCT RULES. The university suspends him pending inquiry. @DrRPNishank @HRDMinistry.” It ignored the clarification Ahmad issued within hours of what he called a "sarcastic tweet", the purpose of which was to draw attention towards the situation facing the Muslims of India due to the Citizenship Amendment Act (CAA). Ahmad says in satire such analogies are usually drawn.

Another website, notorious for peddling fake news, went a step further to misrepresent Ahmad’s tweet. It omitted, replaced and even added words to it to completely change the narrative. While some other media platforms did mention Ahmad’s second tweet, they failed to investigate the first tweet.

What does Jamia Millia Islamia say?

The university administration told Outlook that an enquiry will be conducted in due course as per procedure. "Suspension under service rules is not punishment. It's integral mechanism under service rules wherein full opportunity will be provided for defense," a senior varsity official said on condition of anonimity.

"In view of lockdown situation... the enquiry is not activated at the moment (sic)."