Rhea Chakraborty claimed that she has not committed any crime whatsoever and has been falsely implicated in the case. 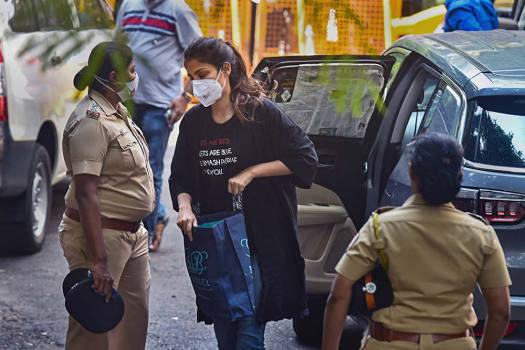 Actor Rhea Chakraborty, held in a drugs case linked to her boyfriend and actor Sushant Singh
Rajput's death, has alleged in her bail application filed in a Mumbai court that during her interrogation by the NCB, she was "coerced" into making "self-incriminating confessions".

In the plea filed in a sessions court on Wednesday, Rhea also claimed that she has not committed any crime whatsoever and has been falsely implicated in the case.

Her bail application is scheduled to come up for hearing on Thursday.

The actor, who was arrested in Mumbai by the Narcotics Control Bureau (NCB) on Tuesday, filed this plea after a magistrate court rejected her bail application.

In the plea, she also said that her arrest is "unwarranted and without any justification".

"The actor's liberty has arbitrarily beencurtailed," it added.

The plea also said that no female officer was present during her interrogation.

Rhea was arrested after three days of questioning by the NCB.  She is currently in judicial custody. Besides Rhea's, the bail pleas of other accused, including that of her brother Showik, who was arrested by the NCB last week, will also be heard on Thursday.

Besides Rhea and Showik, the NCB has also arrested Sushant's house manager Samuel Miranda and others on drug supply charges.

The NCB had earlier said that Rhea, in her statement revealed about her involvement in the procurement of drugs and financial transactions and also her instructions to other accused, Samuel Miranda, Sushant's domestic help Dipesh Sawant and Showik in this regard.

"Therefore, it is clear from her statement that Rhea is an active member of the drug syndicate connected with drug supplies," the agency said.

The NCB had said that the actress has revealed that she used to procure drugs for Sushant for consumption purpose. She also used to manage finances for drug procurement along with the late actor, it added.

The NCB is probing the drug angle in this case under criminal sections of the NDPS Act after the Enforcement Directorate (ED) shared with it a report following the cloning of two mobile phones of Rhea.

Various angles surrounding the death of the Sushant Singh Rajput are being probed by three federal agencies- the NCB, the ED and the Central Bureau of Investigation (CBI).

Sushant Singh Rajput (SSR) was found dead at his Bandra flat on June 14.