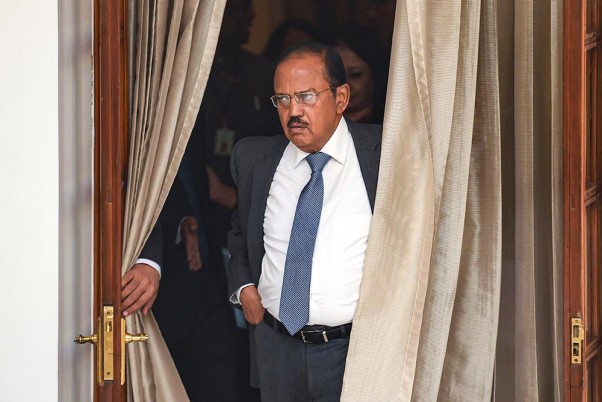 India on Tuesday walked out of a meeting of the national security advisors of Shanghai Cooperation Organisation (SCO) member countries in protest after the Pakistani representative used a "fictitious" map showing Indian territories as part of Pakistan.

"This was in blatant disregard to the advisory by the host against it and in violation of the norms of the meeting. After consultation with the host, the Indian side left the meeting in protest at that juncture," External Affairs Ministry Spokesperson Anurag Srivastava said.

The virtual meeting was chaired by Russia.

"As was to be expected, Pakistan then went on to present a misleading view of this meeting," Srivastava said responding to a query on the issue.

Government sources said the Pakistani action was "blatant violation" of the SCO charter and against all its established norms of safeguarding the sovereignty and territorial integrity of SCO member states.

They said the Indian side issued its strong objection to the use of the illegal map by Pakistan and even the Russian side tried very hard to persuade the Pakistani representative not to do so.

Pakistan was represented at the meet by Moeed W Yusuf, Special Assistant to the prime minister on national security.

Nikolai Patrushev, the Secretary of the National Security Council of Russia, conveyed that he was personally very grateful to Indian NSA Ajit Doval for attending the meet, the sources said.

They said Russia does not support what Pakistan has done and hopes that Pakistan's "provocative" act will not affect India's participation in SCO and not cast any shadow on Patrushev's warm personal relationship with the Indian NSA for whom he said he has the "highest regard".

Both India and Pakistan are members of the SCO, an influential regional grouping.

The SCO, seen as a counterweight to NATO, has emerged as one of the largest trans-regional international organisations which accounts for almost 44 per cent of the world population stretching from the Arctic Ocean to the Indian Ocean and from the Pacific Ocean to the Baltic Sea.