With an eye on China, the new Japanese Prime Minister is likely to build upon the efforts of his predecessor Shinzo Abe to further strengthen the relationship with India. 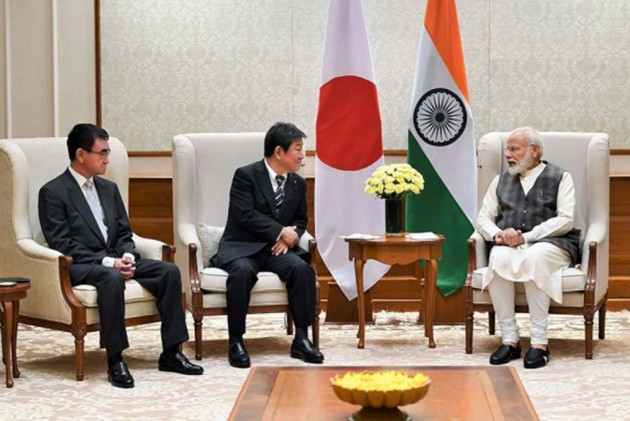 What will India-Japan ties look like under new Japanese Prime Minister Suga Yoshihide? That is a question that many are asking today.

Former prime minister Shinzo Abe was a friend of India. Abe realised early on the importance of a democratic India in the future power balance across Asia. He saw the potential of a rising India much before other Japanese leaders and was singularly responsible for transforming ties with New Delhi from what foreign minister S. Jaishankar described as a “relatively narrow bilateral level” to a significant strategic partnership.

Suga Yoshihide who has now taken over has promised to follow through the policy goals of his predecessor. A close confidante of Abe, he served as his Cabinet Secretary from 2012 till he stepped down to take over the reins as Prime Minister. But with the slowdown in Japan’s economy following the pandemic, Yoshihide's first priority will naturally be the economy. How much time and attention he will devote to foreign policy remains to be seen. Whether Abe’s vision for the Indo-Pacific and focus on India as an emerging major player in the region is sustained is not known. Abe is a far-sighted strategic thinker, and he had laid out his vision for the future in a 2007 visit to India,

Addressing both Houses of Parliament, Abe spoke for the first time of the confluence of the two seas.

“My friends, where exactly do we now stand historically and geographically? To answer this question, I would like to quote here the title of a book authored by the Mughal prince Dara Shikoh in 1655. We are now at a point at which the Confluence of the Two Seas is coming into being.’’

He outlined the importance of the Pacific and the Indian Oceans as seas of freedom and prosperity in a broader Asia. The quad, a Japan, US, India, and Australia grouping, was Abe’s idea about an arc of democracy stretching from the Pacific to the Indian Ocean. The quad is now in place and is likely to become a major player in ensuring a rule-based order in the Indo-Pacific. More countries are likely to join the group that China regards as a move to contain its rising military, economic and political power across Asia.

What Abe began with Prime Minister Manmohan Singh carried over to Narendra Modi, who embraced the Japanese leader’s vision with enthusiasm. Against the backdrop of rising tension between India and China, relations with Japan take on an added significance.

The good news is that Japan is as concerned about China, and India remains the perfect big power for rebalancing Beijing in Asia. So, it is in Japan’s interest as well to continue Abe’s outreach to India. It is no longer relevant which government or party is in power in either country, it is a question of national interest for both India and Japan to work closely together as a bulwark against China. In future the strategic co-operation will not just be confined to India, Japan and the US, but will draw in other powers like Vietnam, Indonesia and Philippines to join forces to strengthen national security.

At the release of a report on India and Japan by the Federation of Indian Chambers of Commerce & Industry (FICCI) on Friday, foreign minister Jaishankar noted that the two countries have now expanded their agenda to the bigger playing field of the Indo-Pacific. He pointed out that Japan is the only country with which New Delhi not only holds an annual summit but a 2+2 dialogue as well. This means that the defence and foreign ministers meet each year. These exchanges help to secure defence, foreign policy, and political ties at the highest level.

Earlier India-Japan ties were basically economic. Japan’s Overseas Development Fund was the basis of this cooperation since 1958. But today Japanese FDI is equally important and New Delhi is pushing for more investments from Japanese companies. Defence cooperation has also become an important facet of bilateral ties. Japan is now a permanent invitee to Malabar, the India-US naval exercises.

The foreign minister said the rebalancing of forces in Asia is now a fact of life. He did not mention China, but basically the rebalancing is a result of China’s aggressive rise in Asia. To counter this fundamental shift, India and Japan have to work together. In fact, they are natural allies in Asia, both with an eye on a rising China. Prime Minister Suga Yoshihide is as conscious of this as India’s Narendra Modi.