The imposing nine-century-old Emaar Mutt right in front of the temple, which provided a vantage platform for the high and mighty for viewing the Rath Yatra in the past, has been completely razed to the ground. 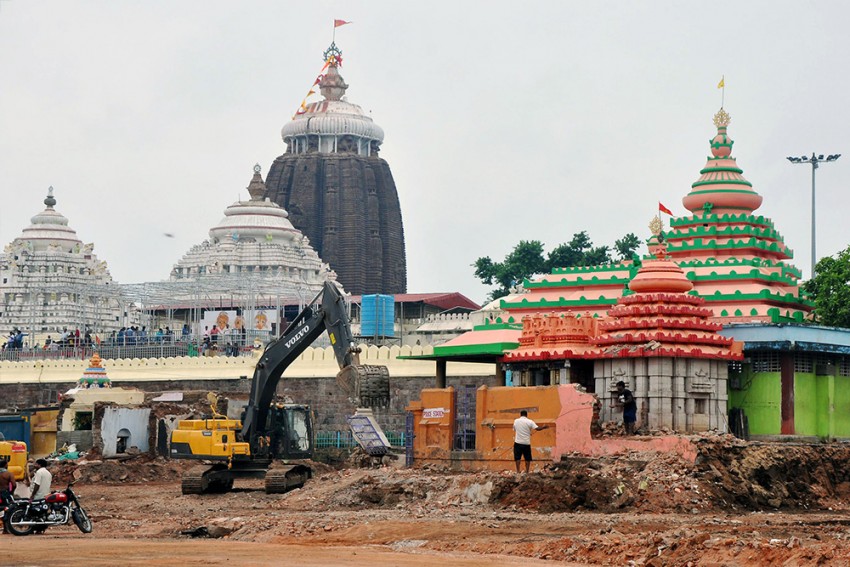 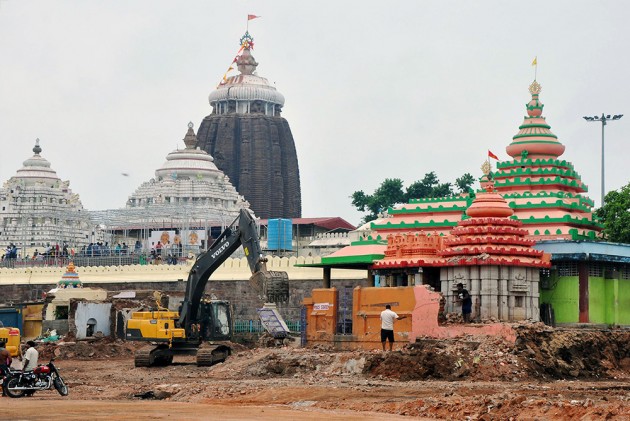 If you are visiting the famous Lord Jagannath temple in Puri after a while, you will be excused if you feel you have landed at the wrong place. The area in front of the holy 12th-century shrine, which is normally teeming with thousands of devotees at any given time of the year, now wears a deserted look.

The imposing nine-century-old Emaar Mutt right in front of the temple, which provided a vantage platform for the high and mighty for viewing the Rath Yatra in the past, has been completely razed to the ground. Also, gone are two more ancient mutts – the Languli Mutt and the Bada Akhada Mutt – while 18 others, including the Manguli Mutt once visited by Guru Nanak, are waiting for what looks inevitable.

The shrill sound of bulldozers that drowned the din of pilgrims till recently has fallen silent temporarily. But there is no mistaking the administration’s determination to clear all structures within a 75-meter radius of the Temple. The legal hurdles have been cleared without much ado and it is only a matter of time before the demolition drive resumes.

The entire area, vacated by the demolition of the mutts, has been cordoned off and devotees now enter the temple through a narrow iron barricade in a queue. Old men and women, who prided themselves on being close to the Lord, are devastated at the sheer thought of being pushed far from the Lord while numerous shops and lodges around the temple are in the process of shifting out with a heavy heart. It is nothing short of a catastrophe for everyone affected. 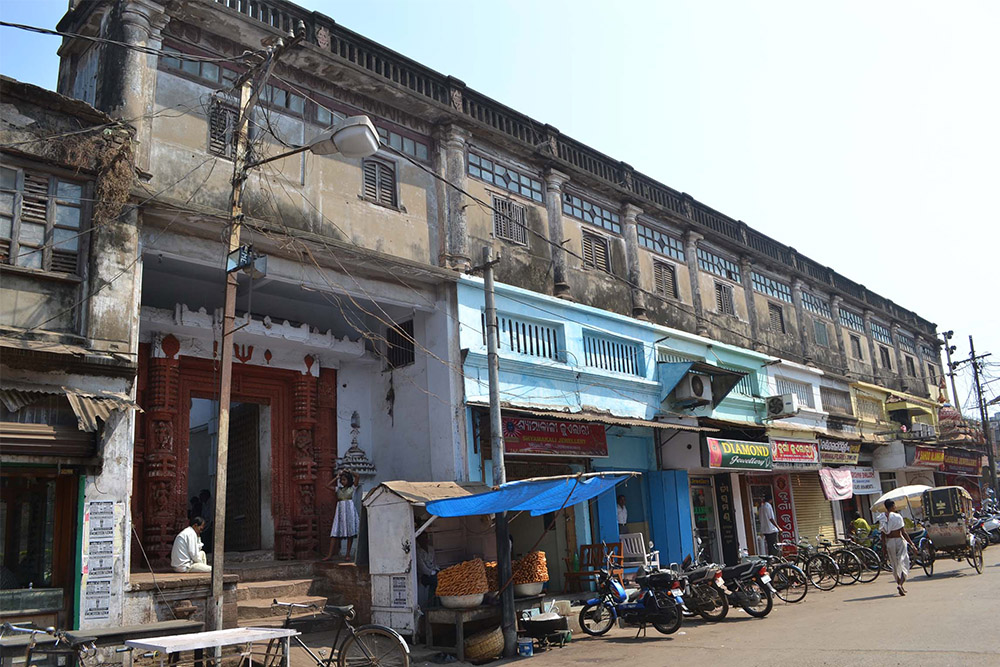 It all began on August 19 when the Puri district administration began demolishing all structures – old and new, shops and houses, mutts and dharmashalas – in a 75-meter radius around the temple. “It was necessary to undertake this drive to ensure the safety and security of the temple and pilgrims and is being done as per the recommendations of the Justice BP Das Commission on reforms of the temple,” Puri Collector Balwant Singh told Outlook.

Not everyone is convinced that the safety of the temple required the demolition of ancient mutts though. “The mutts are at the core of Jagannath Sanskriti (culture). If the temple is a banyan tree, the mutts are its descending roots,” says Gopal Ramanuja Das, mahant of the Kataki Mutt. “The Lord stays in the temple, the sadhus in the mutts. It’s the sadhus who introduce us to God. If they are gone, the temple will gradually lose its identity,” adds Debashish Mishra, a social activist of Puri.

Collector Balwant Singh, however, denies the allegation that the demolition of the centuries-old mutts had severed their umbilical cord with the temple. “If you have noticed, we have left the places of worship in the mutts intact. All that we have done is to demolish dilapidated structures that posed a threat not just to the inmates but also pilgrims. In any case, we have earmarked land elsewhere to relocate them to ensure that their religious activities continue unhindered.” But senior journalist and Editor of ‘Nirvay’, Navin Das, counters the argument thus: “What safety are we talking about? Isn’t the 12th century temple itself unsafe? Isn’t the Archeological Survey of India (ASI) engaged for years in renovating and restoring the unsafe structures? Why couldn’t the same have been done in case of the mutts? As for keeping the worship place intact, can we demolish the temple while keeping the GarbhGriha(sanctum sanctorum) of the Jagannath intact and then claim that we haven’t touched the temple?”

Inmates of the mutts staring at demolition are not impressed with the safety argument offered by the administration to justify the demolition either. “Do you think we are not concerned about our own safety? After all, we stay here, not the government. Only last year, we dismantled the whole building and built a new one spending upwards of Rs 1 crore. All that has now gone down the drain,” rues Ram Manohar Das of the San Chhata Mutt.

As for the promise to relocate the mutts elsewhere, here is what Rambhushan Das, mahant of the mutt, had to say. “The new mutt will be a ‘duplicate’ mutt, not the original one, isn’t it? There are no lodges, shops or business establishments here. I fail to understand how this can be a threat to the Temple?”

While it is debatable whether the demolition of the mutts was unavoidable, there can be no arguments on the administration’s reasoning that the multitude of structures around the temple, including the mutts, hindered crowd movement and posed a serious threat of stampede, especially on special occasions like Rath Yatra, SunaVesha and Nagarjuna Vesha when lakhs of devotees gather to have a darshan.

Stampedes leading to deaths have been happening with frightening regularity in and around the temple. Ranjit Kumar, the Supreme Court-appointed amicus curie in the ongoing temple reforms case in the apex court, also referred to the expected crowd of 15 lakh during the Nagarjuna Vesha scheduled next year to justify the ongoing clearance drive. The last time Nagarjuna Vehsa took place, way back in 1993, six pilgrims had died in a stampede. Four pilgrims were killed during Kartik Purnima in 2006, six during the Rath Yatra in 2008 and two more in 2015. The open spaces created by the demolition would certainly facilitate easier, smoother movement of crowds and minimize the possibility of such mishaps.

The people most distraught by the demolition, however, are those who lived or earned their livelihood around the temple for generations. Shantilata Devi, a 70-year old woman who lives close to the temple, is in tears as she says; “All my life, the first thing I have done on waking up every morning is to look at the Nilachakra ‘bana’ (flag) at the top of the temple from my house. I had thought I would follow this ritual till I die. But now that dream lies shattered.”

Surendra Nath Mahapatra, whose family provides the ‘SenaPata’ (darzi) seva to the Lord during the Rath Yatra and other special occasions, is equally devastated. “We are a family of 40 and live on selling the Lord’s flags. We will be ruined once we shift out,” he says, threatening to stop the ‘seva’ without which he says the Lord cannot mount the Rath. His brother Basanta says the administration should have first rehabilitated them before evicting them. Prafulla Mahapatra, who sells ‘khaja’ by the side of the Meghanad Wall, stares at a bleak future. “We have been told that we shall be provided space at the Jagannath Ballav mutt. But who will go there to buy ‘khaja’?” he asks.

Collector Balwant Singh is empathetic to the plight of those who have to move out. “I can understand the pain of those who have lived and earned their livelihood around the temple for generations. But the pain is for a larger cause – the safety, security and beauty of what is one of only four dhams in the country,” he says.

For the Naveen Patnaik government, it certainly is the biggest challenge of his fifth term because it involves the sentiments of crores of Jagannath lovers in the state and beyond. The government appears to have won the first round with the Supreme Court dismissing a plea by the affected people seeking its intervention to stop the demolition and the amicus curie giving a thumbs up to the ongoing drive.

The generous compensation package for the oustees announced by the government, described by the collector as the best offered anywhere in the country, has also tampered the resentment somewhat. Pictorial projections of how the whole place would look like after the rebuilding is complete and the amenities to be provided for pilgrims have also largely won the approval of many people. Some deft political management has ensured the silence of the opposition, the BJP in particular. Insiders say the Modi government and the Naveen dispensation are on the same page on the issue. But it remains to be seen if the government, facing flak for its various acts of omission and commission while running the affairs of the temple, can pull it off this time.

NRC Will Be Implemented In West Bengal, Not A single Hindu Will Have To Leave India : Kailash Vijayvargiya