In Absence Of Ailing Paswan, Son Chirag Left To Fight His Own Battle In Bihar Polls

Chirag Paswan had been instrumental in persuading his father to return to NDA more than a decade after he had quit the Atal Bihari Vajpayee govt over 2002 Godhra riots. Paswan was initially said to be reluctant to mend fences with the BJP but Chirag helped him make up his mind. 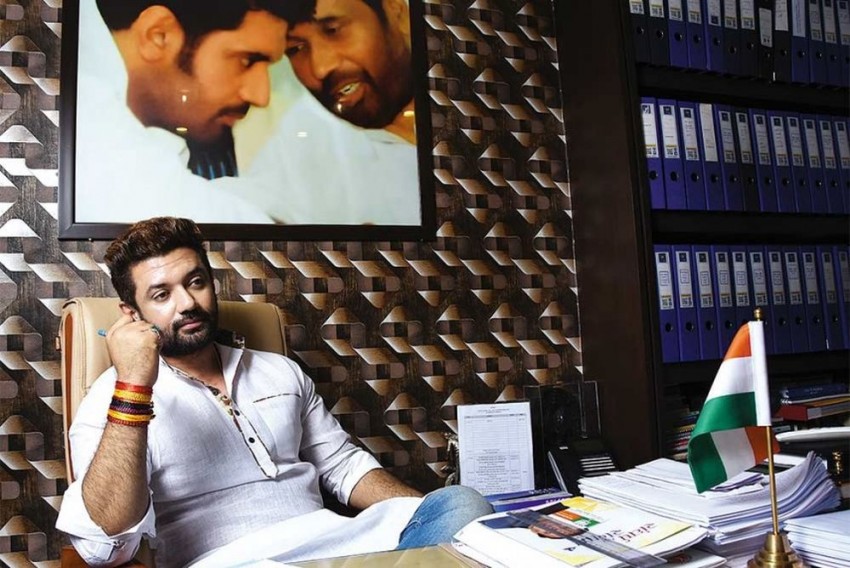 For the first time in five decades, Lok Janshakti Party founder Ram Vilas Paswan will not be around to campaign for his party in the assembly elections in Bihar. The veteran Dalit leader has undergone heart surgery at a Delhi hospital and is likely to undergo another operation a few weeks later.

It is in his absence from the poll battleground that his son Chirag has taken the party’s biggest gamble yet by taking on Chief Minister Nitish Kumar. But will he prove to be equal to the task?

Paswan Senior commands tremendous goodwill among voters in Bihar, especially the Dalits, and has consolidated his party bit by bit over the past two decades. But he will remain out of action because of multiple health issues this time around. The Union minister for Consumer Affairs, Food and Public Distribution has been in a hospital for over a month now and on Saturday, he had to suddenly undergo heart surgery due to some complications.

“Papa has been undergoing treatment at a hospital. Last evening, his heart surgery had to be done due to sudden changes in the situation. If needed, he may well have to go for another surgery after a few weeks. I thank you all for standing by me and my family in this hour of crisis,” Chirag tweeted on Sunday.

Chirag had earlier said that it would be for the first time in 50 years that his father will not be present during the Bihar polls but he hoped that he would connect with the people through digital platforms. However, in view of his health now, it seems unlikely that he will be able to even do that.

In the absence of his ailing father, Chirag, therefore, has a mammoth task cut out for him. Unlike Paswan Sr., who first became an MLA way back in 1969, Chirag is relatively new to state politics, especially to assembly elections. Even though he won the Lok Sabha elections for the second consecutive term from Jamui (Reserved) constituency in 2019, it is his father who had always spearheaded the party campaign as the biggest Dalit leader from Bihar. Except in the past six-seven years, Chirag stayed away from state politics and even tried his luck in Bollywood with a film, Miley Naa Miley Hum (2011) opposite Kangana Ranaut. But after its failure at the box office, he left the tinsel world and contested the 2014 Lok Sabha elections.

In fact, he was said to be instrumental in persuading his father to return to NDA more than a decade after he had quit the Atal Bihari Vajpayee govt over 2002 Godhra riots. Paswan was initially said to be reluctant to mend fences with the BJP but Chirag helped him make up his mind, convincing him about the ‘imminent return’ of the saffron party to power at the Centre under the leadership of Narendra Modi six years ago.

Chirag has since shared a very good rapport with the BJP top brass and mostly negotiated with them during the seat-sharing talks. Even before he announced to opt-out of the NDA in the ensuing Bihar polls on Sunday, he held hectic parleys with senior BJP leaders such as Amit Shah and J.P. Nadda, sparking speculations that he had broken ranks with the NDA to benefit the BJP at the cost of Nitish.

In all his efforts, he, of course, has the support of his father, who has already handed over the party’s reins to him authorising him to make all decisions. In fact, the doting dad had found Chirag to be a worthy candidate for the Chief minister’s post last year.

Nonetheless, will Chirag be able to turn the tables on Nitish in his father’s absence from the rough and tumble of Bihar’s electoral politics? Paswan Sr. knows each and every Bihar constituency like the back of his hand. He has a personal rapport with each and every village headman of the constituencies, such as Hajipur, which are considered to be his pocket borough. In contrast, Chirag has not risen from the grassroots. Though he sought to connect with the people in the state by launching his “Bihar First, Bihari First” yatra in February this year, the lockdown enforced by the Coronavirus put a spanner in the wheels of his ambitious mission.

With less than four weeks before the first phase of elections now, Chirag has to tighten his belt in his bid to win enough seats to emerge as a kingmaker, if not the king – a role his father had sought to play without success after the February 2005 assembly polls. It is a big risk he has taken with confidence, but he will have to prove himself without his redoubtable father by his side in the battleground this time.