Did the emperor of Persia, Shah Abbas I murder the queen of Georgia St Queen Ketevan in 1624? The available literary sources confirmed it, however, the Iranian version always contradicted it because they treat Shah Abbas I among the most enlightened rulers in the country’s history.

On July 9, when External Affair Minister S Jaishankar presented the remains of the Queen to the Foreign Minister of Georgia, the event went down in history as one of its kind where Indian molecular biologists convincingly corroborated the literary shreds of evidence of the queen’s murder.

“It was one of the challenging projects that were assigned to us and we took almost a year to finish it,” K Thangaraj, Chief Scientist, Centre For Cellular And Molecular Biology (CCMB), said.   He is also the Director, Centre for DNA Fingerprinting and Diagnostics.

It is an unusual story about how India got involved in the historical matters of the two countries Georgia and Iran. The historical text says that the emperor of Persia conquered the Georgian kingdom in 1613 and held the Queen captive for ten years in Shiraz, a city located in the southwest of Iran. In 1624, when she refused the emperor’s offer to convert to the Islamic faith and join his harem, she was tortured to death. 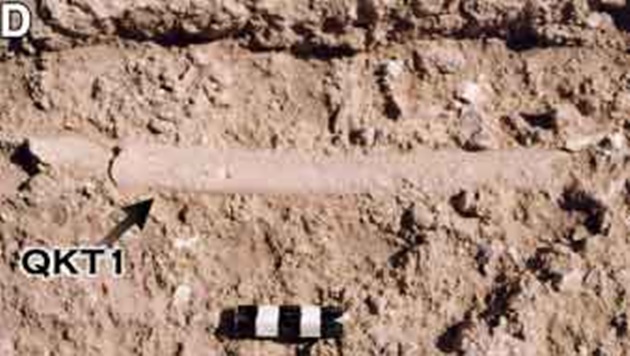 A year before her death, two Augustinian priests had arrived in Shiraz to start a mission. They got access to the queen and became her confessors. After she was buried, they unearthed the grave and hid her remains from 1624 to 1627.

To keep her relics safe, they hid her different parts of the body at different places. In an unusual turn of events, the right arm of the queen was carried to St. Augustinian convent in Old Goa and kept it safely.

The location of the relics was categorically mentioned in the documents however the renovation and rebuilding of the Church from time to time changed everything and posed a big challenge to interpret the exact location.

As the queen's relic was important for Georgia people, the then Soviet Union govt and later the Georgian govt, when it was separated from the USSR, requested the government of India to help in locating the queen’s relics.

The search started in the late 1980s and continued with breaks in between. After a lot of effort, the local historians and the archaeologists of Goa circle of Archaeological Survey of India (ASI) collaborated and reconstructed the ground map of the church on the basis of literary sources in 2004.

Finally, after an extensive search, they managed to locate a long arm bone which they registered as QKT 1. During the excavation, they also found two other bone relics (QKT2 and QKT3).

Though the archaeological and historical data confirmed that the relics QKT 1 being the remains of Queen Ketevan yet the next challenge was the direct confirmation of her identity. Also, they had to rule out the two other relics QKT 2 and QKT 3.

At this juncture, molecular biologists K Thangaraj and Niraj Rai from CCMB and Gyaneshwer Chaubey from Estonian Biocentre, Estonia played a crucial role in isolating the mitochondrial DNA of QKT 1, QKT 2, and QKT 3.

“In the past, we have sequenced the DNA of 800 to 2000 years old human skeleton in the Roopkund Lake case which is in the Himalayan mountains but that was not as challenging as extracting the DNA of this about 350-year-old relics of the queen,” Thangaraj said.

He added, “It is because the Roopkund Lake is a frozen area whereas the queen’s relics were lying under the silos for so many years in a very humid condition in Goan church.”

Despite all the challenges, they extracted the DNA and cross-verified it with more than 22,000 DNA sequences of Indians available in CCMB data bank but it didn’t match with anybody.

On the other hand, QKT 2 and QKT 3 matched with the different ethnic groups in South Asia, and particularly India.

In the next steps, they requested ASI to arrange some DNA samples of Georgian people. 33 such samples were made available and fortunately, two out of 33 matched with the DNA of QKT 1. The team of experts also managed to find out that the DNA sample of QKT1 was of a female.

Prof Chaubey, who provided the genealogical analysis of the three relics, said, “So these three things – (a) a female DNA, (b) genetically related with the person of Georgian origin and (c) unmatched with over 20,000 Indian DNA – were enough to prove that the relics belonged to Georgia’s queen Ketevan.”

They also published their research paper soon after the discovery in 2014 in Elsevier journal, however the diplomatic process to handover the relics to the government of Georgia took almost seven years.