'Hit By Pellet In Eye?': In Kashmir, Advertisements By Doctors Attract Pellet-Blinds

Since the number of pellet-blinds has gone up, such advertisements attract a number of patients. Private hospitals in the Valley also use radio, newspapers and hoardings to attract pellet victims. 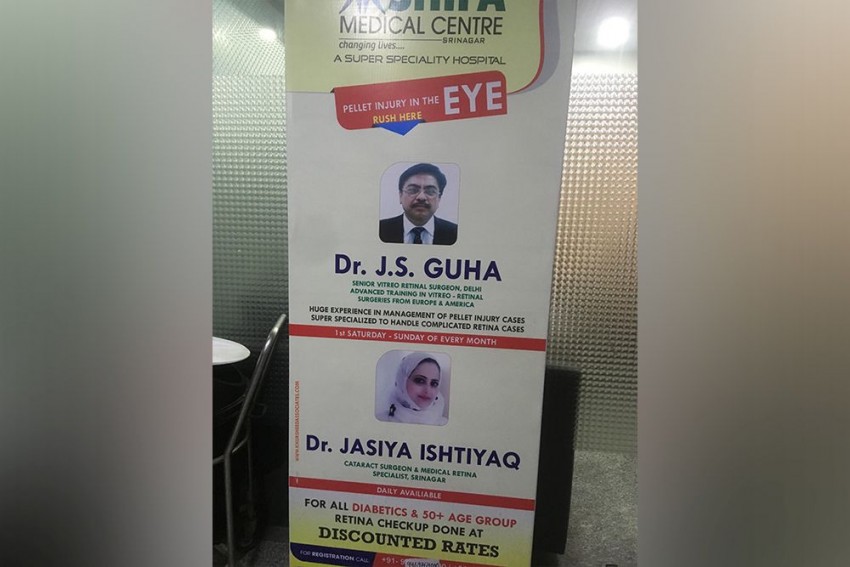 A hoarding at a private hospital in Srinagar.
Naseer Ganai November 29, 2019 00:00 IST 'Hit By Pellet In Eye?': In Kashmir, Advertisements By Doctors Attract Pellet-Blinds 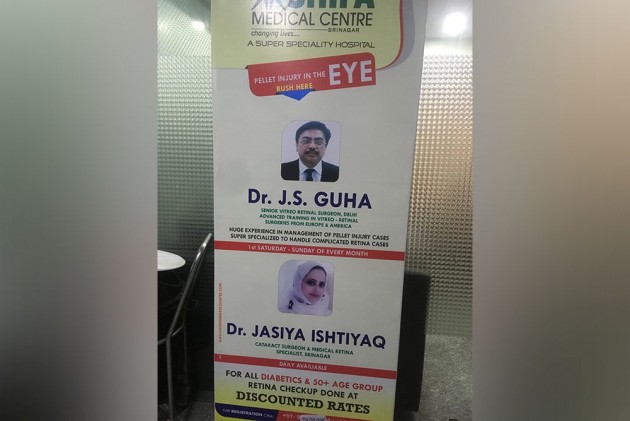 A hoarding at a private hospital in Srinagar reads: "Pellet Injury In The Eye. Rush Here". The advertisement is eye-catching as the Valley has seen a surge in cases of eye injuries due to pellets since 2016, with hundreds of them having lost their vision partially or completely. Some of the victims are as young as 10 years old.

The advertisement, put up at Shifa Medical Centre in Srinagar,  describes the visiting doctors as experienced in treating patients with pellet injuries. The hospital management says the doctors see, on a daily basis, around 25 pellet-blinds.

Since the number of pellet-blinds has gone up, such advertisements attract a number of patients.

Private hospitals in the Valley also use radio, newspapers and hoardings to attract pellet victims.

Human rights activists in the Valley say that Kashmir might be the only place in the world where advertisements are issued to “attract pellet victims”.

“I don’t think this happens anywhere else in the world. It shows the rampant use of pellet guns and how it has damaged people’s lives that it attracts doctors from outside,” an activist said.

The cost for treatment of pellet-blinds is high. Fortnightly, it costs a patient around Rs 1,500 to 3,000 to buy medicines. The surgery costs between 50,000 and 80,000 at private hospitals. In government-run hospitals, however, the surgery is conducted free of cost. After the surgery, the pellet-blinds undergo regular check-ups. In some cases, the victims need psychiatrist treatment as they develop Post Traumatic Stress Disorders due to the injury.

In August, when the central government revoked provisions of Article 370 that granted a special status to undivided Jammu and Kashmir, British medical journal, The Lancet, published an editorial expressing concern over the physical and mental health of Kashmiris.

The Lancet editorial said 1,253 persons had been blinded by pellet guns between 2016 and 2018. The editorial pointed to “gross human rights violations by state security forces and armed groups,” in the region.

"The people of Kashmir need healing from the deep wounds of this decades-old conflict, not subjugation to further violence and alienation,” the editors concluded.

When Hizbul Mujahideen militant commander, Burhan Wani, was killed by security forces in July 2016, it stirred unrest and widespread protests in the Valley that lasted for several months. The government, later in November 2017, said that an estimated 1,725 persons suffered pellet injuries during the unrest in 2016.

However, the unofficial estimates put the number much higher at around 6,000, of whom more than 1,400 persons lost their vision permanently.

Several human rights advocacy groups, including Amnesty International, have urged the J&K and the Central government to curb the use of pellet guns in the Valley.

When a petition in J&K High Court sought a ban on the use of pellet guns, the paramilitary forces revealed they had fired 1.3 million pellets on protesters in just one and a half month after the killing of Wani.

In August 2017, a seven-member expert committee, headed by the Joint Secretary in the Home Ministry, was set up to find "an alternative to pellets" to deal with protests in the Valley. The committee concluded there cannot be a blanket ban on the use of pellet guns, saying they cannot make “our security forces a sitting duck.”

According to the official figures, in 2018, at least 395 persons suffered pellet injuries in their eyes. The data for 2019 is not available yet.