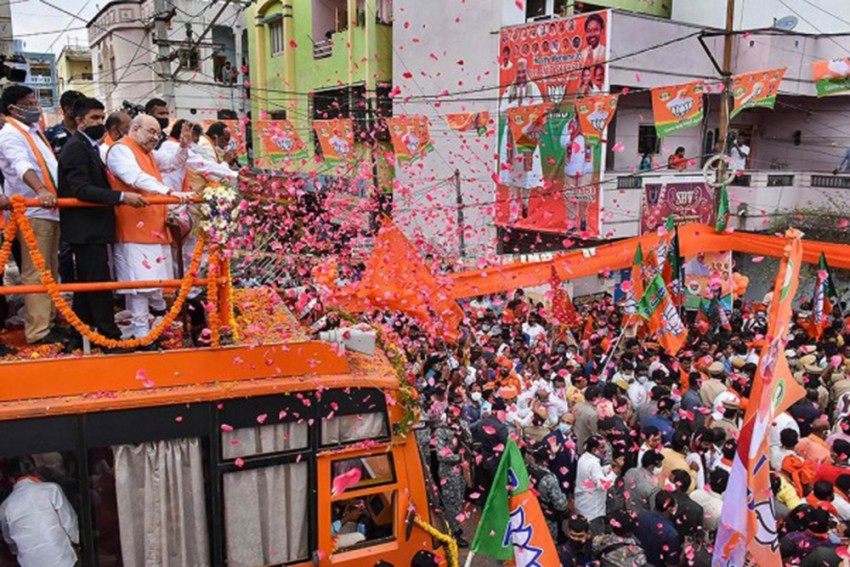 The ruling Telangana Rashtra Samiti (TRS) headed by K. Chandrasekhara Rao might have managed to retain the cash-rich Greater Hyderabad Municipal Corporation (GHMC) but not before suffering some considerable embarrassment.

Not only has the TRS lost its vote share, but lost 30 seats that it won in the 2016 polls. Contrary to this, the BJP not only increased its vote share from mere 10 to 36 per cent, but also managed to win close to 45 seats (at the time of filing this report, the BJP was leading in 44 seats, the TRS in 56 and AIMIM in 42).

Interestingly, the AIMIM has managed to retain its minority vote bank by winning 42 out of 44 seats they won in the last polls. AIMIM legislator Akbaruddin Owaisi’s speeches which went viral in social media seem to have benefited the BJP most but cost its “discreet” ally, the TRS, dear.

In the 2016 polls, the TRS had won 99 of the 150 seats and created a history of sorts, while the AIMIM 44.  The TRS’s decision to go solo in the polls was not to lose its Hindu vote bank, but if poll results are anything to go by, it did not impress the voters much.

And, the worst sufferer in the polls is the Congress, which failed to improve its performance since the last Assembly polls.  One of the reasons may be because the party is losing its credibility as most of its MLAs or councillors chose to jump onto the TRS bandwagon.  As a result, the voter too seems to have realised that voting for that party is as good as voting for the TRS.

Interestingly, the TRS leaders, who exuded their confidence of hitting a century this time around, have to suffer the worst embarrassment, as the party ended up winning only 60-65 seats (at the time of filing this report).

The BJP which has emerged strongly in the GHMC polls, is likely to occupy the principal Opposition role, dislodging the Congress from its roots.

What the TRS did not realise was that its surprise move to bring the polls forwards by a month-and half and get endorsed by its hand-picked state election commissioner would misfire. The BJP, fresh from its Dubbak victory, has not only accepted KCR’s challenge but has also taught yet another hard lesson to his party and government. It quickly roped in its national leaders, including the national party leader JP Nadda and the Union home minister Amit Shah, besides other political heavyweights like Uttar Pradesh Chief Minister Yogi Adityanath.

All their presence in the just weeklong campaigning not only ignited the needed heat but reposed confidence among those vexed electorates with TRS and Congress to accept them as potential alternatives in state politics to check the “family rule” of KCR. And, Amit Shah’s response to a newsman’s question that, will his party check rampant corruption in the ruling family, too was well received by the people.  To another question, the home minister replied to KCR’s son and minister KT Ramarao’s jibe “national leaders for gully polls” by stating that his party takes all polls seriously.

“What we wanted we could achieve. Yes, our party has finally arrived in Telangana to take on TRS and the GHMC poll results indicate the downfall of the TRS government. There are no more takers for regional sentiments.  Development is our mantra and people of Greater Hyderabad have shown interest by voting in favour of our party,” said the BJP’s state chief spokesperson K Krishna Saagar Rao.

The BJP top guns’ decision to campaign indeed rattled the TRS, though not much the AIMIM.  The AIMIM appears to have taken advantage of some hardcore BJP leaders’ presence in election campaign like Yogi to its advantage to win back its cadres.

But, the TRS looks unperturbed with the electoral loss in the municipal polls.  “What matters most is that we have retained the corporation, that too on our own strength. A few people may be unhappy for a variety of reasons and did not come out to vote.  Yet, our performance is simply because of people’s faith in our Chief Minister K. Chandrasekhara Rao and his dynamic son K. Taraka Ramarao,” claimed senior party functionary, Palle Rajeshwar Reddy.

Referring to inflammatory speeches of the Uttar Pradesh chief minister,  he alleged that Yogi had vitiated the environs. “What happened to their ‘sab ka saath, sab ka vishwas’ commitment?  Why should they rake up incidents that took place after Independence?” he wondered. He held the saffron party responsible for creating fear psychosis among people to stay indoors and skip voting, which led to a low turnout.

Though the Congress’s performance was dismal yet again, it managed to win a couple of seats and blamed the ruling TRS, BJP and AIMIM, who all communalised the campaigning with their unwarranted language. “In such a scenario, the BJP managed to benefit the most,” said senior Congress leader Marri Shashidhar Reddy.

Meanwhile, there is a possibility that some senior Congress leaders, who realized that the party has no future in the state, are apparently waiting to cross over to the BJP camp. They apparently have sent feelers that they are willing to join if they get an invite from top BJP leaders like either Amit Shah or Nadda.  Prominent names that are making rounds are the Congress MP Komatireddy Venkatreddy and another former MP Konda Vishweshwar Reddy.  In fact, Konda Vishweshwar Reddy, who left TRS to join Congress just before the last Lok Sabha polls, had also tweeted saying that the BJP’s emergence as a strong force in the state is an undeniable fact.  Already, his tweet has stirred a hornet’s nest that his intentions now appear to switch over to the saffron party.