The Congress had announced it will take out the 'Gai Bachao, Kisan Bachao' march in Bundelkhand to highlight the alleged mismanagement in cow shelters. 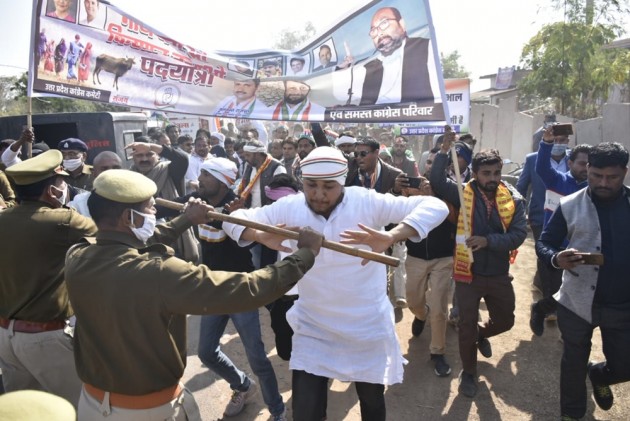 Uttar Pradesh Congress president Ajay Kumar Lallu and over 50 party workers were arrested here on Saturday after they tried to take out the 'Gai Bachao, Kisan Bachao' march without permission, police said.

However, district Congress president Balwant Singh Rajput, who was among those arrested, claimed around 200 party workers were arrested.

He also alleged that about two dozen party workers were injured as the police used force against them.

The Congress had announced it will take out the 'Gai Bachao, Kisan Bachao' march in different districts of Bundelkhand to highlight the alleged mismanagement in cow shelters under the state government.

"About 50 to 60 workers, state Congress chief Ajay Kumar Lallu and district unit chief Balwant Singh Rajput were arrested from Dailwara township while trying to take out the march without permission. They have all been taken to police lines," ASP Brijesh Kumar Singh said.

The Congress' six-day march was to start from Saujana Gaushala here and culminate at Mandakini river in Chitrakoot district, where the party planned to perform 'tarpan' (religious rites) for the cows that died due to the state government's "mismanagement".

Speaking to PTI on phone, Rajput said, "About 150 to 200 workers were arrested by the police, who also used force, when they tried to take out the march led by the state Congress chief. About two dozen workers were injured."

He alleged that the BJP has no concern for cows or farmers.

Cows in Saujana and Amjhara cow shelters are dying of starvation and the Yogi government is arresting Congress workers and UPCC chief to hide its "sins", he added.

On Friday, the Congress had claimed its senior leaders including national secretary Rohit Choudhary and former MP Pradeep Jain Aditya had been put under house arrest in Jhansi ahead of the march.