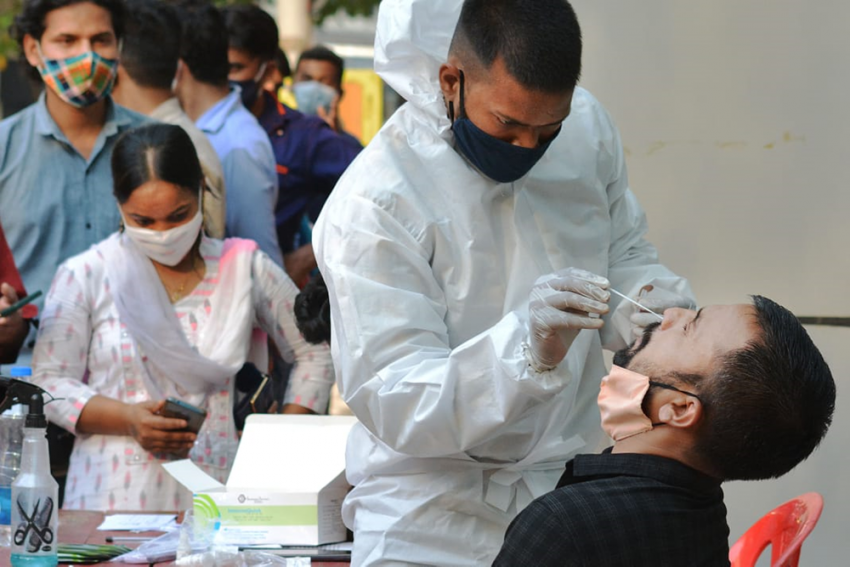 Experts have observed that the ongoing fourth wave of the coronavirus pandemic in Delhi is spreading much faster and causing high-grade fever. It is hitting the younger population more, especially those in the age group of 30 to 50.

The fourth wave is more dangerous than the previous ones and according to data available with him, 65 per cent of patients infected this time are below 45 years, said Delhi Chief Minister Arvind Kejriwal.

The sudden spike in Covid-19 cases in Delhi over the last few days and across the country has baffled medical experts.

Some doctors said the reason behind a large number of people contracting the infection this year vis-a-vis last year could be that the "virus has mutated" and the current strain is more infectious.

"The younger population goes out for work, uses public transportation and hence, there are more chances of coming into contact with others. Many people are still not wearing masks or maintaining social distancing, which has contributed to the rise in cases," said Suranjit Chatterjee, a senior consultant at Apollo Hospitals, Delhi.

He, however, pointed out that the number of deaths in Delhi is still much lower compared to what was recorded during the previous waves in June, September and November.

Chatterjee, a Covid-19 survivor himself, said doctors in their 40s and 50s and other younger healthcare workers, say in their 30s, are getting infected in the current wave despite most of them having taken both doses of the Covid-19 vaccine.

Thirty-seven doctors at Sri Ganga Ram Hospital in Delhi have tested positive for Covid-19 during the fourth wave of the pandemic. Of these, five have been admitted for treatment, hospital sources had said last Thursday.

Many of them had taken both doses of the Covishield vaccine, they had said.

Richa Sareen, consultant, pulmonology and critical care medicine at Fortis hospital, said, "Given the pace of the spread of the infection, it definitely seems there is a different variant in circulation and it is more infectious than the previous one."

A senior doctor at the Delhi government-run Rajiv Gandhi Super Speciality Hospital, which has been turned into a dedicated Covid-19 hospital again, agreed that the coronavirus infection is spreading rapidly among the younger population.

The number of patients at the hospital has suddenly increased, he said.

In the last week of March, when cases began to rise in the country, the Union health ministry had said the new "double mutant" variant of SARS-CoV-2 was detected in Delhi, Maharashtra and some other places in addition to the three "variants of concern" -- first noticed in the UK, South Africa and Brazil -- that have been found in at least 18 states and union territories.

Various strains of SARS-CoV-2, including the UK, South Africa and Brazil variants, have been termed as highly transmissible by experts.

Recently, Delhi Health Minister Satyendar Jain also told reporters that it seemed that the younger population is getting infected more in the fourth wave of the pandemic.

The Delhi government imposed a night curfew in the national capital from April 6 after reports were coming in that many people were holding parties and social gatherings, he had said.

Delhi recorded its biggest daily rise of 10,774 Covid-19 cases on Sunday, prompting Kejriwal to issue a stark warning to residents that they should not step out of their homes unless it is urgent.