Several people were trapped when a mound of earth caved in on a row of houses of tea estate workers in Idukki district of Kerala early Friday morning. 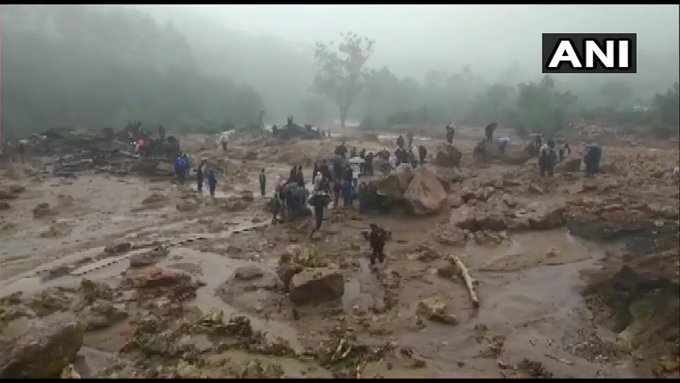 At least 14 people were killed and over 50 others feared trapped in debris after a landslide triggered by heavy rains flattened a row of dwelling units of tea estate workers at Pettimudi in this high-range district in Kerala early Friday, police and officials said.

The incident is said t have occurred in the wee hours when a huge mound of earth fell on the "row houses" and two children and five women were among the deceased, most of whom were plantation workers from neighbouring Tamil Nadu.

Twelve people have been rescued and efforts were underway amid continuing rains to locate at least 52 others missing in the first major rain-related mishap since the onset of South West monsoon last month that brought back memories of havoc caused by floods in the previous two years in the state.

The state government said teams of National Disaster Response Force personnel have been deployed for the rescue operations and also sought an Indian Air Force helicopter.

The death toll in rain-related incidents since June 1 this year has risen to 51. One person died in a house collapse in Palakkad on Friday, officials said.

Cooking utensils buried in mud, asbestos and tin sheets strewn around were all there to be seen at the area, which was the habitation of around 80 odd workers at the picturesque area near a tea plantation, about 30 kms from the tourist town of Munnar. Big boulders are also scattered around the site.

Idukki DistrictCollector H Dinesh said that the bodies of the victims had been retrieved and 12 have been rescued with injuries and shifted to hospital.

Meanwhile, the India Meteorological Department has sounded a red alert for Idukki on Friday, indicating extremely heavy rains of over 20 cms.

The tragedy came to light after a forest watchman informed authorities about the landslide. The communication lines have been down in the area since the past three days.

The state Health department has dispatched 15 ambulances and a special medical team to provide medical assistance to those affected by the landslides in Idukki.

Meanwhile, the office of Chief Minister Pinarayi Vijayan has contacted the Air Force seeking its helicopter for the rescue mission in Idukki.

"The National Disaster Response Force (NDRF) has been deployed for the rescue operations in Idukki. The team was already stationed in the district. Another NDRF team from Thrissur was also directed to move to Idukki," Vijayan said in a Facebook post.

The India Meteorological Department had issued a red alert for Idukki on Friday, indicating extremely heavy rainfall of over 20 cms.

Munnar MLA S Rajendran told the media that it was difficult to reach the spot as a bridge which provided access to the area was washed away in the rains.

"At least 200-300 people live there. There are many lanes and a canteen at the location. We are yet to receive further details. Since one of the bridges to that area was destroyed last night, it has become difficult to access the region," he added.

"Also, those who are there are finding it difficult to contact us because the only mobile tower there is not functioning properly due to power failure," Rajendran said.

Workers from a nearby estate have rushed to the spot for rescue operations.