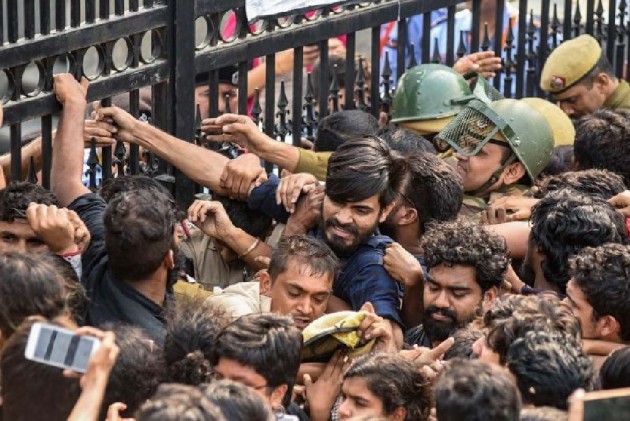 The Delhi Police has registered an FIR in connection with the "vandalism" of administration block of the Jawaharlal Nehru University (JNU) last week, officials said on Sunday.

A complaint was submitted by the chief security officer of the JNU on Thursday evening, following which an FIR was registered against unidentified persons on Saturday, police said.

The administration had submitted photographic and videographic evidence in the matter.

On Wednesday, students had painted various messages for the vice-chancellor inside the administration block as they barged inside the building to talk to him about the hostel fee hike.

Slogans proclaiming, ''Reject IHA Manual", "JNU is not your estate" among others were seen on the walls of the administration block.

The administration had announced a partial roll back but the students dubbed it as an "eyewash".

The left-backed All India Students' Association condemned the registration of the FIR.

Two other complaints -- one by Professor Buddha Singh, chairman of Swami Vivekananda Statue Installation Committee and another by Bharatiya Janata Yuva Morcha -- were filed on Saturday against "objectionable" messages written on base of a statue of Swami Vivekananda.