Didi, Nephew Will Be Vanquished After 8th Phase Of Bengal Polls: Modi Takes Dig At Mamata 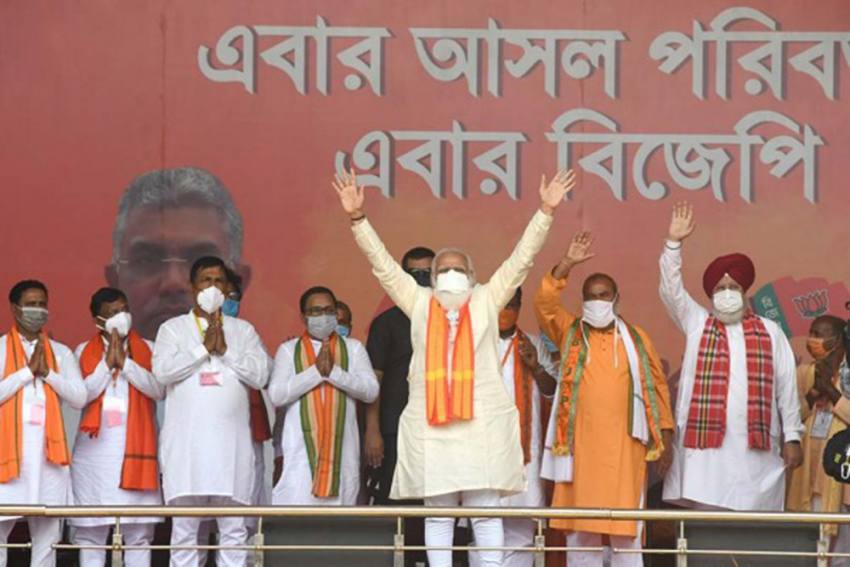 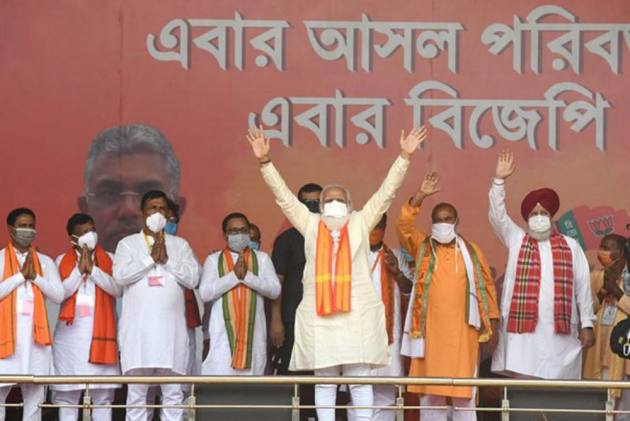 Amid fifth phase of Assembly elections in West Bengal on Saturday, Prime Minister Narendra Modi exuded confidence of the BJP emerging victorious in the polls and claimed that the TMC has already been “broken” in the first four phases of the polls.

Hitting out at the TMC chief, he further said that Mamata Banerjee and her nephew Abhishek Banerjee would be vanquished by the end of the elections.

Fifth phase of polling for the Bengal Assembly elections began at 7 am on Saturday. Three more phases of voting are yet to be held, with the last phase scheduled on April 29. Counting of votes will take place on May 2.

Speaking at an election rally in Bengal’s Asansol, Modi also claimed the Trinamool Congress supremo has an old habit of doing politics with dead bodies and has been trying to politicise the "unfortunate" death of five people at Sitalkuchi in Cooch Behar district on April 10.

On April 10, CISF personnel opened fire outside a polling booth in Cooch Behar district after a mob allegedly tried to attack them. The violence left four people dead. In a separate incident, a first-time voter was shot dead after being dragged from a polling booth in the same district.

Modi later contended at a rally at Gangarampur in Dakshin Dinajpur, that Banerjee has been abusing him almost every other day as he raises questions on Trinamool Congress’ track record of "corruption".

"After four phases, TMC is broken to pieces and `Didi, `bhatija will be vanquished after eight phases of elections (are completed)," Modi said at Asansol. Polling is scheduled in the industrial town in the seventh phase on April 26.

Banerjee and her nephew Abhishek have been spearheading the TMC's campaign in the Assembly elections in West Bengal for a third consecutive term for their party.

Holding that illegal coal mining has flourished in places around Asansol in West Bardhaman district, the prime minister said everyone knows where the proceeds of this trade went.

Modi said the West Bengal chief minister's insensitivity was evident once again in connection with the Cooch Behar firing incident, while referring to an audio tape that went viral on Friday.

"The truth is that Didi thought of her own political gain from the death of people in Cooch Behar she has an old habit of doing politics with dead bodies," he alleged.

Contending that Banerjee has not been attending most of the meetings between the prime minister and state chief ministers on one pretext or another, Modi said that she has also not attended two recent meetings over the emerging Covid situation in the country.

He went on to claim his rival Banerjee has stood as a wall between West Bengal's people and central welfare schemes, depriving them of benefits, including from the PM-Kisan and Ayushman Bharat schemes.

At a rally at Gangarampur, the prime minister rhetorically said Banerjee's day is never complete without abusing him, listing out the "abuses" showered on him by the chief minister.

Modi said that whenever he raises the issue of corruption in the ranks of the TMC, Banerjee "abuses me and says will make me perform squats holding ears."

"Had you (Banerjee) pulled the ears of extortionists who loot the people of Bengal and asked your beloved nephew to do squats, you would not have had to see this day," he said, asserting that BJP will win the ongoing West Bengal assembly elections handsomely.

The prime minister said that on March 19, Banerjee had compared him with "Duryodhan and Dushyashan" (villains in the epic Mahabharata).

Claiming the list is long, he said that on March 20, the TMC supremo termed him a "killer of labourers and a rioter" and on March 24, she alleged the prime minister is a "liar" and "associated with a syndicate".

Seeking an apology on behalf of the "cultured people of Bengal" he reminded the rally that Banerjee had on March 25, also termed him the king of killers.

Modi said that while he is not worried about Banerjees abuses, he felt she should care for the culture and ethos of Bengal.

"It is not that she has insulted Modi by using such language she has put to shame the culture, linguistic sweetness and legacy of Bengal," he said.

Modi said he has been speaking up against the ills faced by Bengals populace under the Mamata Banerjee government, including appeasement and insult of backward classes.

"Didi's close associate has used the term 'bhikari' (beggar) against people of backward classes in the state," Modi alleged.

Modi added that the people of West Bengal, where elections have been marred by violence on many occasions, now have the freedom to vote without fear after several decades.