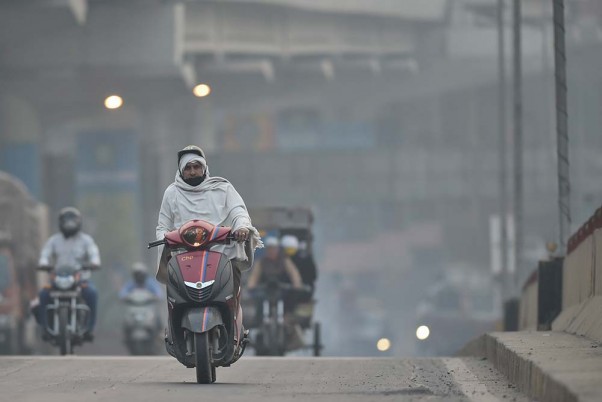 Pollution levels in the national capital dipped on Monday with high wind speed aiding dispersion of pollutants, even as farm fires continued to rage in neighboring states.

The city recorded a 24-hour average air quality index (AQI) of 293, which falls in the "poor" category.

In a bid to control pollution, the Delhi government has also said that only "green firecrackers" can be manufactured, sold, and used in the national capital in accordance with a 2018 Supreme Court order.

The "green crackers" are not as polluting as the conventional types of firecrackers and they contain at least 30 per cent less particulate matter such as sulphur dioxide and nitrogen oxide.

Fireworks can take place between 8pm and 10pm only on festivals like Diwali and Gurpurab etc. On Christmas eve and New Year's eve, it would be from 11:55pm till 12:30am only, according to the Delhi Pollution Control Committee.

It was 364 on Sunday, with stubble burning contributing 40 percent to Delhi's pollution and negating the effect of better ventilation.

The Air Quality Early Warning System for Delhi said a "significantly" large number of fires were observed over Punjab, Haryana, Uttar Pradesh, and Madhya Pradesh on Sunday which is likely to impact the air quality in Delhi-NCR and northwest India.

Higher wind speed and better ventilation index will be favorable for dispersion of pollutants on Tuesday, it said.

According to the ministry of earth sciences' air quality monitor, SAFAR, the share of stubble burning in Delhi's pollution was 16 percent on Monday.

It had soared to 40 per cent on Sunday, the maximum so far this season.

Stubble burning accounted for 32 per cent of Delhi's PM2.5 pollution on Saturday, 19 per cent on Friday, and 36 percent on Thursday.

Last year, the farm fire contribution to Delhi's pollution had peaked to 44 per cent on November 1, according to SAFAR data.

According to Punjab Pollution Control Board, the state has recorded 33,165 "fire events" this season so far, while Haryana has reported 6,034 farm fires during the period.

According to the India Meteorological department, the predominant wind direction was westerly-northwesterly and the maximum wind speed was 18km per hour on Monday. The city recorded a minimum temperature of 10.8 degrees Celsius, the lowest in the season so far.

Calm winds and low temperatures trap pollutants close to the ground, while favorable wind speed helps in their dispersion.

According to the central government's Air Quality Early Warning System for Delhi, the city's ventilation index – a product of mixing depth and average wind speed – was around 12,000 meter square per second on Monday – favorable for dispersion of pollutants.

A ventilation index lower than 6,000 sqm/second, with the average wind speed less than 10 kmph, is unfavorable for dispersal of pollutants.

Earlier during the day, Delhi environment minister Gopal Rai targeted the BJP and the Congress on the issue of stubble burning, saying the share of farm fires in Delhi's pollution has soared to 40 percent but the opposition parties were in denial.

"We have been saying it again and again that stubble burning is a major reason behind severe levels of pollution in Delhi around Diwali, but the BJP and the Congress say the share of farm fires in Delhi's pollution was just 4 to 6 percent, whereas statistics show it has increased to 40 percent," Rai told reporters.

In Delhi, the administration sprayed the bio-decomposer developed by the Indian Agricultural Research Institute, Pusa, in non-Basmati rice fields to prevent stubble burning.

"The preliminary reports have been extremely positive. Chief Minister Arvind Kejriwal will ascertain the ground reality on November 4," he said.

Haryana Universities To Open From November 16