According to the Central Pollution Control Board (CPCB), the national capital's 24-hour average air quality index (AQI) stood at 494 at 4 pm on Sunday, the highest since November 6, 2016 when it was 497. 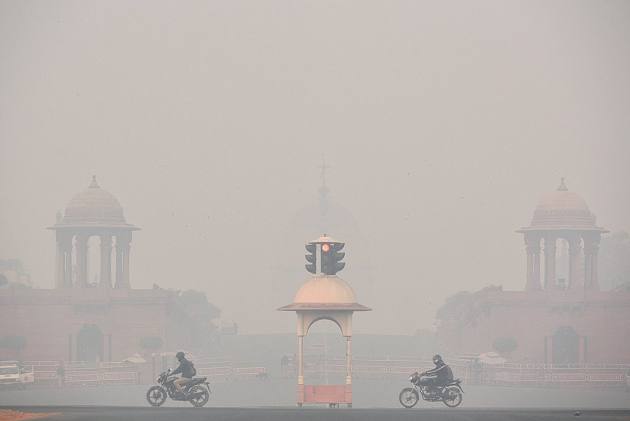 According to the Central Pollution Control Board (CPCB), the national capital's 24-hour average air quality index (AQI) stood at 494 at 4 pm on Sunday, the highest since November 6, 2016 when it was 497.

The principal secretary to the prime minister, P K Mishra, chaired a high-level meeting on Sunday and it was decided that Cabinet Secretary Rajiv Gauba would monitor the situation with the governments of Delhi, Haryana and Punjab on a daily basis.

Mishra reviewed the situation arising out of burning of stubble and wastes, construction activities, and industrial and vehicular pollution in the National Capital Region and other parts of north India.

Senior officials from Punjab, Haryana and Delhi joined the meeting through video-conferencing, according to a statement.

"The Cabinet Secretary will monitor the situation with these states on a daily basis," it said.

The chief secretaries of these states have been asked to monitor the situation in various districts of their respective state round the clock.

Official sources later said about 300 teams are in the field in Delhi to reduce air pollution and necessary machinery for this work has been distributed in the states.

Main focus is on seven industrial clusters and major traffic corridors in NCR, they said.

The Centre is keeping a close watch on polluting units and burning of wastes besides construction activities, the sources said.

This meet came in the wake of Delhi Chief Minister Arvind Kejriwal making a pitch for the collective effort of the Centre, neighbouring states and Delhi to tackle the dipping air quality.

This matter should not be politicised. People of Delhi did everything they could to reduce pollution in the city but concrete steps have to be taken against stubble burning," Arvind Kejriwal said in a video message.

Kejriwal called on all neighbouring states and the Centre to "sit together" and deliberate on solving the pollution caused in Delhi due to stubble burning.

The apocalyptic haze stiffened its choke on Delhi and satellite towns as scattered rains on Saturday increased humidity, leading to smog and a cloud cover preventing sun rays from warming the ground.

Low visibility due to smog at the Delhi airport led to diversion of 37 flights to other airports.

Twenty-one of the 37 air quality monitoring stations recorded the AQI between 490 and 500 with air quality sensors at Aya Nagar, Ashok Vihar, Anand Vihar and Aurobindo Marg peaked out at 7 pm.

The Ministry of Earth Sciences' air quality monitor, SAFAR, said the city's overall AQI reached as high as 708 around 5 pm, which is 14 times the safe level of 0-50.

"Wind speed increased significantly on Sunday. But the smog, due to high humidity after scattered rains, and a cloud cover didn't let sun rays reach the ground. As a result, the air near the ground remained cold and heavy," Mahesh Palawat, a senior scientist at Skymet Weather, a private forecaster, explained.

Weather experts said any significant improvement in the situation is highly unlikely unless there a rainfall, which may on November 7 and 8 under the influence of Cyclone Maha and a western disturbance, washes away the pollutants.

On Twitter, hashtags 'DelhiBacho' and 'DelhiAirEmergency' trended for a major part of the day as hundreds of people expressed their willingness to leave the NCR till the situation ameliorates.

Many also severely criticised the Board of Control for Cricket in India's (BCCI) decision to go ahead with the first India-Bangladesh T20 match at the Firoz Shah Kotla Grounds, disregarding concerns about the health of players and thousands of spectators.

"Delhi ppl should leave at least for 1-2 weeks.. It is painful to live," a Delhi resident tweeted. "I think it's time to leave Delhi. Went out for groceries and came back with eyes burning," another said.

According to a survey released on Sunday, over 40 per cent residents of Delhi and NCR want to move to another city because of bad air quality while 16 per cent want to travel during the period. The survey involved 17,000 respondents from Delhi and NCR.

A group of environmentalists wrote a letter to Prime Minister Modi requesting him to save "the children, the elderly and our most-vulnerable who suffer the worst effects of pollution".

Meanwhile, Delhi Chief Minister Arvind Kejriwal questioned the pace at which the Centre was distributing machines among farmers for in-situ management of straw to prevent stubble burning.

"Till now 63,000 machines have been made available to farmers in Punjab and Haryana. There are 27 lakh farmers in these states. How long would it take to distribute machines to all these farmers. For how long do we have to bear this pollution," he asked.

Kashmir Was A 'Problematic Place': Satya Pal Malik After Being Sworn In As Goa Governor