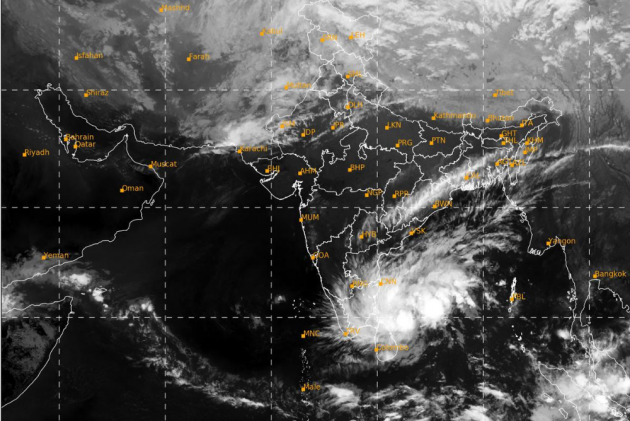 The deep depression over Bay of Bengal intensified into a cyclone and is likely to cross the coast between Tamil Nadu and Puducherry as a severe storm on Wednesday, officials said.

All government officials have been put on high alert in Tamil Nadu and the neighbouring union territory of Puducherry and extensive precautionary measures, including evacuation of people from vulnerable areas have been taken, officials added.

The cyclone christened 'Nivar' is very likely to cross the coast between Karaikal in Puducherry and Mamallapuram in Tamil Nadu on Wednesday late evening as a severe cyclonic storm with a wind speed of 100-110 km per hour gusting to 120 kmph, the Met department said on Tuesday. It said rainfall is very likely at most places in Tamil Nadu, Puducherry and Karaikal, near Nagapattinam, on Wednesday with heavy to very heavy showers at a few places and extremely heavy rainfall at isolated places under the influence of the cyclone, the first one to form since the onset of the northeast monsoon on October 28.

Several roads and intersections in Chennai witnessed traffic congestion and waterlogging on Tuesday due to intermittent downpour influenced by the cyclone. Water stagnation was witnessed in five locations and in view of coordinated action between departments and effective storm water drain infrastructure, waterlogging receded quickly, municipal administration minister S P Velumani said. Velumani further said that 15 IAS officials have been specially assigned to monitor all the 15 zones of the Chennai corporation in view of the impending cyclone.

The Puducherry district administration on Tuesday imposed prohibitory orders under Section 144 to prevent movement of people in public places. All shops and business establishments have also been directed to be closed from 9 pm on Tuesday to 6 am on Thursday.

“Puducherry is likely to be severely affected by the cyclone and there is a grave danger to life, health and safety of people. This order is not applicable to staff engaged in law and order duty and also to those engaged in essential services such as milk supply, fuel stations and pharmacies,” district collector Purva Garg said.

Meanwhile, six special trains belonging to the Thiruvananthapuram division of the Southern Railways running between Kanyakumari-Chennai and Kollam-Chennai, will not function on November 25. The railways has said that a full refund will be granted to passengers who have already book tickets on the cancelled trains adding that an automatic refund will be generated for e-ticket holders.

Prime Minister Narendra Modi on Tuesday spoke to the chief ministers of Tamil Nadu and Puducherry regarding the states’ preparedness assured them of all possible support from the Centre.

"Spoke to Tamil Nadu CM Shri @EPSTamilNadu and Puducherry CM Shri @VNarayanasami regarding the situation in the wake of Cyclone Nivar. Assured all possible support from the Centre. I pray for the safety and well-being of those living in the affected areas,” Modi tweeted.

Spoke to Tamil Nadu CM Shri @EPSTamilNadu and Puducherry CM Shri @VNarayanasami regarding the situation in the wake of Cyclone Nivar. Assured all possible support from the Centre. I pray for the safety and well-being of those living in the affected areas.

The IMD has issued red alerts for coastal and north interior regions of Tamil Nadu, Puducherry and Karaikal, for November 25, officials said.

In event of the cyclone, there is a strong possibility of thatched huts being damaged, disruption of power and communication lines, damage to roads and uprooting of trees. There could be damage to horticulture crops like banana and papaya, IMD officials added.