Prime Minister Narendra Modi launched the nationwide rollout of the Covid-19 vaccination drive via video conferencing earlier in the day. 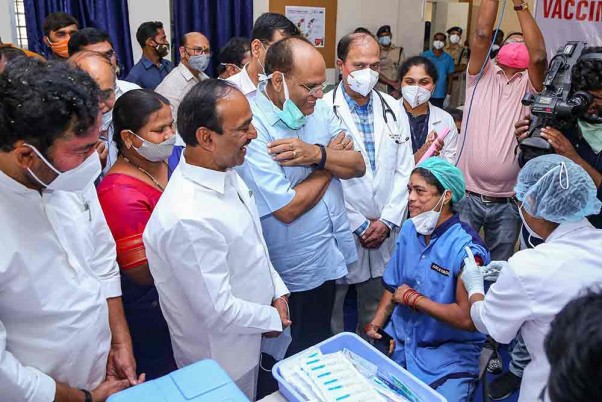 On the day of the nationwide launch of the Covid-19 vaccination drive, hundreds of healthcare workers were inoculated with the first dose of the Covid-19 vaccine. States all over the nation rolled out successful vaccination drives. Many even performed puja and arti before getting the vaccine shot, while others welcomed the historic moment with flowers and happy cheers.

Prime Minister Narendra Modi launched the nationwide rollout of the Covid-19 vaccination drive via video conferencing earlier in the day.

PM Modi and health minister Harsh Vardhan asserted that the made-in-India vaccines being rolled out will ensure a "decisive victory" for the country over the coronavirus pandemic. They urged public to not pay attention to the rumours and have faith in the vaccines.

Here are the states where major vaccine rollout took place in the presence of top political leaders. Check details of the hospitals and people where Covid vaccines rolled out massively:

A 51-year-old woman sanitation worker at a government hospital was the first person to receive the coronavirus vaccine shot in Chhattisgarh after the launch of the nationwide inoculation drive on Saturday.

"Tulsa Tandi, a Swacchtakarmi (sanitation worker) at the Dr B R Ambedkar Memorial Hospital Raipur since 2008, was the first person to get vaccinated in the state", the state director for the National Health Mission Priyanka Shukla told PTI.

Also Read| How Effective Is The Covid Vaccine? Here's What The People Who Took The First Dose Say

The vaccination began in 97 centres across the state, after Prime Minister Narendra Modi formally inaugurated the drive from Delhi, health officials told reporters.

Tandi was administered the Covishield vaccine at the local Pandit Jawahar Lal Nehru Medical College, which is among five vaccination sites in Raipur district, she said adding that drive is underway in all 28 districts in the state.

Around 2.67 lakh healthcare workers and other frontline staff have been registered to receive vaccine shots during the first phase of the drive in the state, said Shukla, who is also state nodal officer for coronavirus vaccination drive.

The state witnessed inoculation of doctors, former health minister on the first day of the drive.

The dean of JJ Hospital in Mumbai, doctors, and former Maharashtra health minister Deepak Sawant were among the first beneficiaries to receive shot on the first day of the inoculation drive.

The inoculation drive is taking place at 285 centres in Maharashtra where 100 healthcare workers will be administered the shots in a day, and cover 28,500 workers, an official said.

"It is a revolutionary step we are taking today. I salute to the Corona warriors who selflessly treated the Covid-19 patients when there was no remedy available," he told reporters.

In Pune, Dr Nitin Abhyankar (57) was among the first beneficiaries who received the vaccine.

"I feel extremely proud and happy that I could become the part of the inaugural inoculationdrive that has started in the country to fight Covid-19," said Dr Abhyankar, who looked perfectly fine after receiving the jab.

The state has received 9.63 lakh doses of Covishield vaccine and 20,000 doses of Covaxin vaccine, which have been distributed to all the districts.

With 'arti' thalis and sweets, the staff of the hospital waited outside the facility to welcome the first beneficiaries of the vaccination drive.

The Covid-19 vaccination drive is under way in the national capital with healthcare workers, who were at the forefront of the fight against the pandemic, getting the first shots amid cheers and applause.

Manish Kumar, a sanitation worker, became the first person to receive the vaccine at the All India Institute of Medical Sciences (AIIMS) here on Saturday.

At the Delhi government-run Lok Nayak Jai Prakash Narayan (LNJP) Hospital, 48-year-old nurse Biji Tomy, a native of Kerala, was the first person to get the shot.

"I am feeling very proud and humbled to be part of this historic moment. We risked our lives and were pained to see so many deaths every day. It is a relief that we have a vaccine against coronavirus now," Tomy told PTI.

As she stepped out 30 minutes after being administered the vaccine, her colleagues greeted her with loud cheers and applause.

The hospital staff cheered other beneficiaries too.

In Delhi, every person will be kept under observation for 30 minutes after the immunisation to watch for any side-effects of the vaccine, according to authorities.

Central District Programme Officer Puneet Jaitley was the second person to get the shot at LNJP.

"It's been 30 minutes since I was administered the vaccine and I feel absolutely fine," he said.

Sandeep Nayar, head of Department of Respiratory Medicine at BLK Super Speciality Hospital, Rajendra Place was the first one to get the shot at the facility.

Vaccination drive begins in Assam, sub-divisional med officer first to receive jab Guwahati, Jan 16 (PTI) Assam joined the nation in launching the Covid-19 vaccination drive on Saturday, with a medical officer in Golaghat district becoming the first person in the state to receive the jab.

Dr Milan Kumar Laskar, the sub-divisional medical officer of Bokakhat, was administered the shot at 11.07 am at a public health centre, right after Prime Minister Narendra Modi addressed the nation on the occasion.

At GMCH, retired vice chancellor of Sankardeva University of Health Sciences, Dr Umesh Chandra Sarma, was the first person to receive the shot, followed by 11 other prominent doctors, including its principal Dr Achyut Baishya and superintendent Dr Abhijeet Sharma.

Similarly, in AMCH, its principal Dr Sanjiv Kakoti was administered the first dose.

Sanitary workers were among the first to receive Covid-19 vaccine shots in Madhya Pradesh on Saturday as a total of 9,564 persons were inoculated in the state on the first day of nationwide drive.

Vaccination centres in Bhopal, Indore, Gwalior and at some other places were decorated with flowers and balloons.

Chief Minister Shivraj Singh Chouhan visited a vaccination centre at Hamidia Hospital here and spoke with some of the beneficiaries.

Hailing the "corona warriors" for treating people when the pandemic was at its peak, Chouhan urged people to follow all the safety protocols even after vaccination.

The state has received 5,06,500 doses of Covishield vaccine so far.

The Covid-19 vaccination drive began in West Bengal on Saturday morning, with a doctor of a private hospital receiving the first shot, officials said.

Bipasha Seth is the first person who got inoculated in the state, the hospital authorities said.

"It's a great day for humankind. I feel elated to get the first dose," said Seth.

The vaccination programme started around 10.30 am at 212 session sites, including medical colleges, urban primary healthcare centres and a few private hospitals, they said.

"Today is a big day for us. It seems we are slowly coming out of the pandemic, which has claimed so many lives. We were in a state of depression for the last one year. From today, we will again relive our lives," Urban Development Minister Firhad Hakim said.

Hakim said Chief Minister Mamata Banerjee will hold a virtual meeting with officials at 1 pm to monitor the vaccination process.

Around 1,800 health workers have been selected for inoculation on Saturday, the officials said.

Around 90,000 frontline health workers at government and private hospitals have been enrolled for the first phase in West Bengal.

Like other states, Goa also kickstarted the Covid vaccination drive by innoculating a hospital worker in the state.

The vaccination drive began in the morning at seven different centres, including two private hospitals, in the state.

Ranganath Bhojje, a worker at the Goa Medical College and Hospital (GMCH) near here, was the first to receive the vaccine dose in the coastal state, an official said.

Union minister Prakash Javadekar and Goa Chief Minister Pramod Sawant were present at the GMCH when Bhojje was given the dose. Ninety nine others will also get the dose at this facility on Saturday.

In South Goa, senior doctor Dr Ira Almeida took the vaccine at the T B hospital in Margao.

Several health workers lined up outside the facility since morning.

Javadekar and Sawant welcomed Bhojje with a rose after he was administered the vaccine.

"I would request family members of the persons who are administered the vaccine not to crowd inside the centre. They should stand outside and wait for the person to come out," Javadekar said.

Sawant said the vaccination drive began at all the seven centres in the state and 700 beneficiaries will get the dose on the first day.

A team of doctors at all these centres would be monitoring the health condition of the persons getting the dose, he said.

A woman sanitation worker became the first person to be administered the first dose of Covid-19 vaccine amid cheers by those present at the Gandhi Hospital as the exercise was launched in Telangana on Saturday.

The vaccination campaign also began simultaneously at various other locations in the state where state ministers and other public representatives were present.

Rajender said work was on to administer vaccines at 144 centres in the state on Saturday with 30 people each slated to receive the shot there.

The state government has invited the participation of public representatives from village 'sarpanches' to ministers in the vaccination programme to spread awareness among people about the exercise.