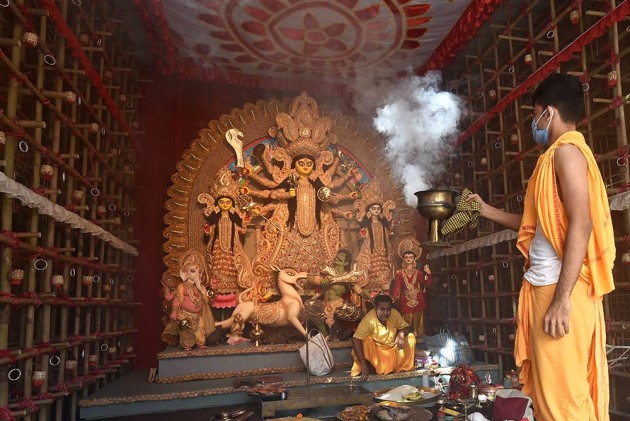 The usual crowd of revelers was missing on the streets of Kolkata on 'Mahasasthi' which marks the beginning of the five-day Durga puja festivities with the Calcutta High Court has declared all pandals no-entry zones, and rain playing spoilsport in the morning.

Many big-ticket pandals, including Ekdalia Evergreen, Singhi Park, Ahiritola Sarbojonin, Tridhara Sammilani, Chetla Agroni, wore a forlorn look, as just a handful of organizers and local residents were allowed to visit the marquees.

A motley group of people was, however, seen clicking photographs of the pandal from far, and indulging in street food, even as the organizers scrambled to ensure the decor at the open-air marquees did not get soggy during the drizzle.

Piyush Saha, an IT professional in the Tollygunge area, said he has downloaded apps launched by some of the award-winning pujas as he "did not want to miss out on the fun and festivities" at these pandals.

"There is no point risking our safety amid the pandemic. As most of the pujas have launched their apps and some are live streaming events on YouTube, why take the risk? I have, however, visited the pandal near my home," he said.

Somnath Das, the secretary of Santoshpur Lake Pally, said, "Visitors will get to see our Maa Durga's idol from a distance of 10 metres, but not many have turned up so far.

"We have also arranged 360 degrees live streaming of our puja on YouTube."

At Sribhumi Sporting Club, where massive public gatherings were witnessed on Saturday and Sunday, triggering concern over Covid-19 spread, organizers have pulled down a part of the dais outside the pandal to facilitate visitors catch a glimpse of the idol from a distance.

An officer of the Kolkata Police said not many people were seen swarming the streets during the day, and no report of court order violation was received from anywhere in the city. He, however, asserted that all arrangements were in place for crowd management.

The Calcutta High Court, in an order on Monday, declared community Durga Puja pandals as "no-entry zones", disallowing visitors from entering the marquees, amid the surge in Covid-19 cases across the state.

Furthermore,  The Met office predicted heavy to very heavy rain in the southern districts of West Bengal on Friday, the day of Maha Saptami of Durga Puja, as the well-marked low-pressure area, formed over the west-central Bay of Bengal in the last two days, turned into a depression.

A Met office bulletin said on Thursday that the system is likely to cross an area between Sagar Island in the state and Khepupara in Bangladesh by October 23 afternoon and turn into a deep depression.

Under its influence, light to moderate rain or thundershowers is likely to occur in many places of various districts of South Bengal and heavy to very heavy rain at one or two places in North and South 24 Parganas districts.

One or two places of Purba Medinipur district is likely to witness heavy to very heavy rain on October 22 and 23, the bulletin said.

Heavy rain is also predicted at one or two places in Kolkata, Howrah, Hooghly, and Nadia districts during this time.

The weathermen advised fishermen not to venture into the sea from October 22 to 24 and asked those who are already there to return as the condition of the sea will be "rough to very rough" till October 24.

In coastal areas, the wind speed will be around 40-50 km/hour.

In the city and adjoining Howrah and Hooghly districts, the wind speed is likely to reach 30-40 km/hour on October 23, the day of Maha Saptami.

The bulletin also cautioned about water logging in some parts of Kolkata and Municipal areas of coastal districts on the day.