After they ran out of even rental money, the duo decided to wander up the hill and stay there till the end of the lockdown 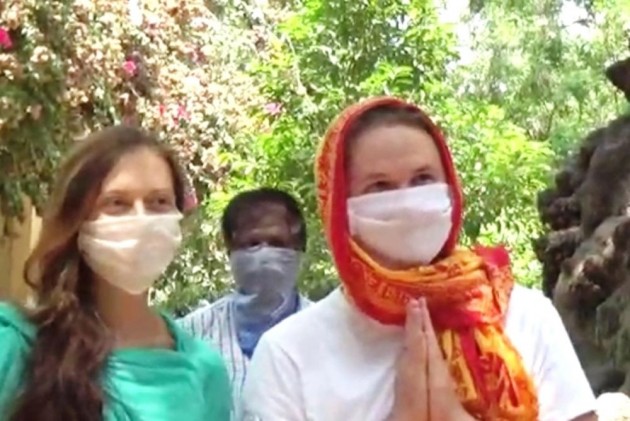 The Annamalayar Hill at Tiruvannamalai town in Northern Tamil Nadu is a favourite spot for solitude and meditation by Indian and foreign pilgrims. But now it has become the preferred abode for foreigners stranded in this part of the country after the lockdown.

It was on this holy hill that the famous Hindu sage Ramana lived and died after a life of penance and prayer. Post lockdown a Russian couple too decided to make the hill their home after they ran out of money to pay rent or even buy food.

Tatiana Simonaeva (29) and Viktor Maksutov (28) from Moscow, had on March 10 reached the temple town famous for its sprawling Shiva shrine identified with one of the five elements – fire – and had rented a house for Rs. 300 per day. With hotels closed after the lockdown, they depended on free food distributed by the Ramana Ashram, using their money only to pay rent.

After they ran out of even rental money, they decided to wander up the hill on Sunday morning and stay there till the end of the lockdown, coming down only for food.

Alerted by the locals about their presence, which was also confirmed by a drone, the local police brought the couple down. The two were found meditating under a tree.

Tiruvannamlai district Superintendent of Police Sibi Chakravarthi said that the couple had been provided free lodging and essentials to cook their own food. “Once the lockdown is lifted we will make arrangements to fly them back to Russia,” he said. They have been asked to get in touch with the local police station for any assistance.

On April 4 another foreign tourist 35-year-old Chinese Yaorui Yang was found living in a cave on the same hill after the local hotels refused to give him a room to stay though he was willing to pay the rent. Considering his country of origin he was tested for corona and found to be negative. He is currently lodged in a private hospital.