The incident took place on the ridgeline of Finger 4 where the Indian Army has been significantly increasing its deployment after occupying several strategic peaks on the southern bank of the lake. 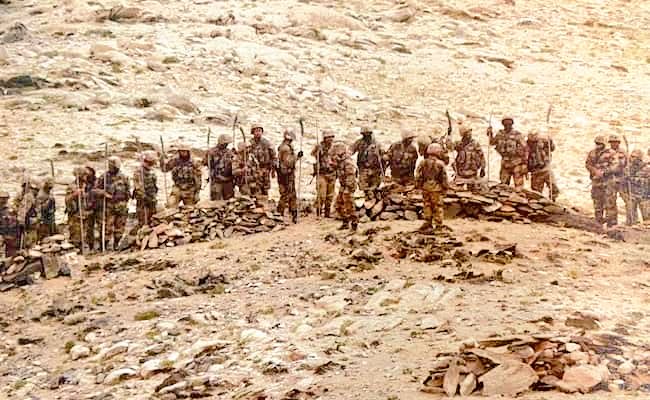 The Chinese army fired a barrage of "warning shots" in the air at the North Bank of Pangong lake in eastern Ladakh last week to "intimidate" the Indian troops ahead of the talks between foreign ministers of the two countries in Moscow, official sources said on Wednesday.

The incident took place on the ridgeline of Finger 4 where the Indian Army has been significantly increasing its deployment after occupying several strategic peaks on the southern bank of the lake, they said.

The sources said a sizeable number of troops from the Chinese People's Liberation Army(PLA) aggressively approached towards an Indian position but they returned sometime later as alert Indian Army personnel held on to their ground with firmness.

While going back, the Chinese troops fired 100-200 rounds of warning shots primarily to intimidate the Indian Army personnel, they added.

The incident took place ahead of a meeting between External Affairs Minister S Jaishankar and his Chinese counterpart Wang Yi last Thursday on the sidelines of a Shanghai Cooperation Organisation (SCO) conclave in Moscow.

The first incident of firing of shots was reported on the evening of September 7 near an Indian position in Mukhpari area of Rezang-La ridgeline on the southern bank of Pangong lake. Both sides accused each other of firing in the air.

The Chinese troops unsuccessfully attempted to close in on the Indian position and it was the first instance of shots being fired at the Line of Actual Control (LAC) in 45 years.

At the Jaishankar-Wang talks, both sides reached a five-point consensus to resolve the over four-month-long border standoff.

The agreement included measures like quick disengagement of troops, avoiding action that could escalate tensions, adherence to all agreements and protocols on border management and steps to restore peace along the LAC.

In the Lok Sabha, Defence Minister Rajnath Singh on Tuesday said the Chinese side has mobilised a large number of troops and armaments along the LAC as well as in the depth areas.

He said there are several friction areas in eastern Ladakh including Gogra, Kongka La and North and South Banks of the Pangong Lake.

"In response to China’s actions, our armed forces have also made appropriate counter deployments in these areas to ensure that India’s security interests are fully protected," he added.

Meanwhile, both sides are yet to firm up a date for the sixth round of Corps commander-level talks.

Tension in eastern Ladakh increased manifold following the Galwan Valley clashes on June 15 in which 20 Indian Army soldiers were killed. The Chinese side too suffered casualties, but it is yet to give out the details.

The situation deteriorated again after China unsuccessfully attempted to occupy Indian territory in the southern bank of Pangong lake on the intervening night of August 29 and 30.

India occupied a number of strategic heights on the southern bank of Pangong lake and strengthened its presence in Finger 2 and Finger 3 areas in the region to thwart any Chinese actions.

China has been occupying the areas between Finger 4 and Finger 8. The mountain spurs in the area is called Fingers. China has strongly objected to India's move. However, India has maintained that the heights are on its side of the LAC.

India has also rushed in additional troops and weapons to the sensitive region following China's transgression attempts. Following China's fresh attempts to change the status quo in the southern bank of Pangong lake, India has further bolstered its military presence in the region.