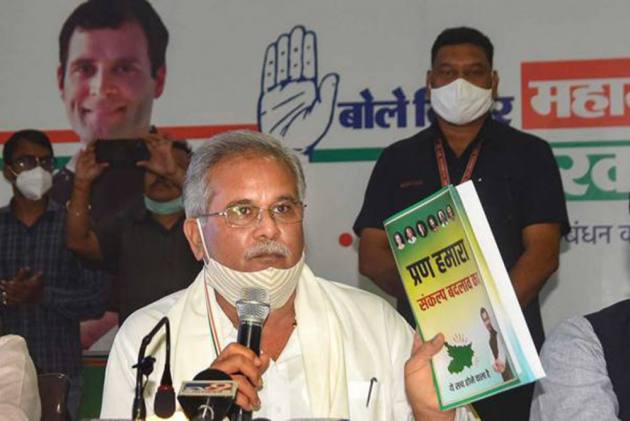 As part of the fourth and final instalment of the Rajiv Gandhi Kisan Nyay Yojana, Chhattisgarh Chief Minister Bhupesh Baghel on Sunday transferred funds worth Rs 1,104 crore to over 19 lakh farmers in the state.

The CM also distributed funds worth over Rs 7 crore to cattle rearers as part of the 15th and 16th instalments of the Godhan Nyay Yojana.

Congress leader Rahul Gandhi, through a virtual message, congratulated the chief minister and his government for fulfilling the Congress’ promise of helping the state’s farmers.

“Today, we have fulfilled the promise of providing Rs 5,600 crore to the farmers of Chhattisgarh. When the central government has brought three laws which are against the farmers, I am happy that the Chhattisgarh government has chosen the path of helping farmers, small businessmen, youth and the poor. This has resulted in strengthening the rural economy of the state by putting money in it. As a result, Chhattisgarh is not facing the problems that other states are witnessing. I congratulate the people of the state and the government for this achievement,” Gandhi said.

Speaking on the occasion, chief minister Baghel, said that his government had distributed funds worth Rs 5,627 crore to farmers as agricultural input assistance.

“Today I am satisfied that we have fulfilled our promise made to the farmers. We have proved that we do not make false promises,” he said.

He further said that prior to this, his government distributed funds worth Rs 4,500 crore to farmers in the state, in three instalments as part of the Rajiv Gandhi Kisan Nyay Yojana. The scheme was implemented in 2020 with an aim to provide agricultural input assistance to farmers and to increase production and productivity of major crops of the state.