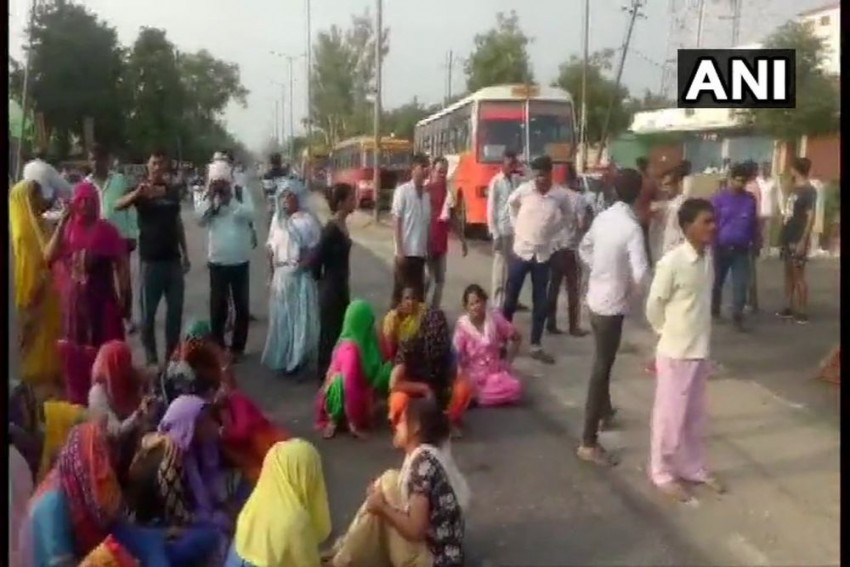 Members of the family stage a protest on the national highway demanding a fair investigation into the incident. (ANI photo)
Outlook Web Bureau 2019-06-25T14:56:02+05:30 Bulandshahr: Man Runs Over Two Women After Trying To Molest Girl From Same Family Two elderly women were killed after being run over by an SUV, driven by a man who allegedly tried to molest a 22-year-old girl belonging to the same family in Uttar Pradesh's Bulandshahr district on Monday. Two other women, again from the same family, were severely injured.

"The man came from behind and told me to sit in his car. He threatened us, saying he will come back. He did come back in a speeding vehicle and hit us. There was only one man in the car. I will identify him," the woman was quoted as saying by NDTV.

Bulandshahr SSP N Kolanchi, while speaking to ANI, on Tuesday said, "We have registered the case under sections for molestation and attempt to murder. The woman in her statement has said that she was asked to sit in the car and the accused ran over them after her refusal."

Atul Srivastava, Superintendent of Police (SP) said, "One person has been arrested for now. While going through the CCTV footage we have not yet found any molestation attempt but only after the investigation is over we can say anything as the probe is underway."