BJP state unit leaders asked to divide all the polling booths into four categories -- A, B, C, D --and form committees on basis of social configuration of the respective polling area. 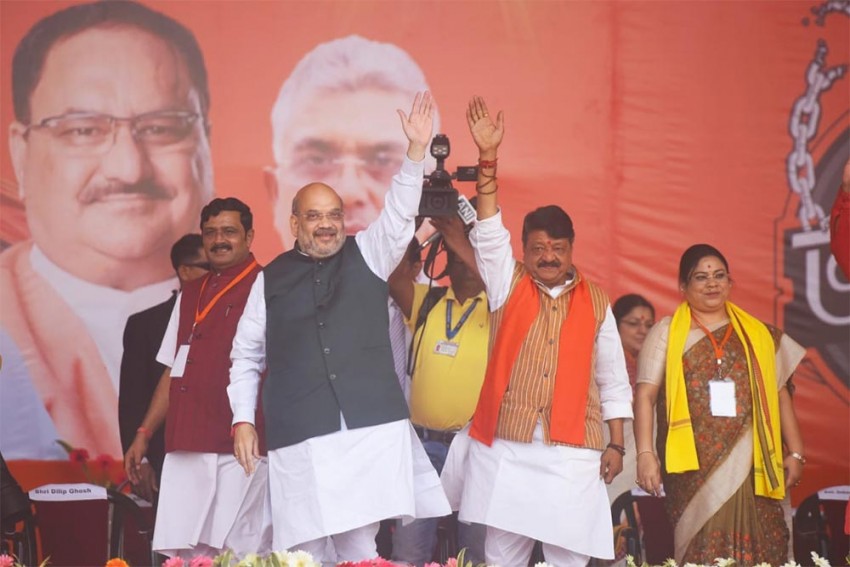 From recruiting workers from reserved categories of society for every polling booth to painting the party's symbol lotus at various locations and staying in touch with priests and people from cooperative societies and self-help groups in the near neighbourhood -- the BJP has devised a booth-level strategy with stress on minute details to wrest power from the TMC in West Bengal.

Senior party leader and Union Home Minister Amit Shah, who might visit the state every month till elections are held, has set a detailed 23-point to-do list for every booth to ensure the BJP's victory in West Bengal, where it has never been in power, sources said.

The BJP state unit leaders have been asked to divide all the polling booths into four categories -- A, B, C, D -- and form committees on basis of social configuration of the respective polling area, the sources said.

Workers have been asked to improve the category of their booths from D to C, C to B and so on, and have been assigned various tasks including recruiting at least 20 people from SC, ST and OBC sections of the society, organising at least six party programmes, making arrangements for people to listen to Prime Minister Narendra Modi's Mann Ki Baat and others.

Staying in contact with all possible influences in every polling booth such as priests of temples, saints of religious organisations, office bearers of cooperative banks and dairy, elected sarpanches and those who lost panchayat elections are also an integral part of the BJP's test and tried booth strategy.

With an aim to make the BJP's presence felt in every neighbourhood and its campaign reach every voter, the local party workers have been asked to paint at least five locations in every polling booth area with BJP's election symbol, identify five party workers with motorcycles and make locals and party workers download the Namo App in their mobiles.

It has also instructed the party workers to collect booth-wise data of results of the last assembly and Lok Sabha elections which will help them in devising the strategy for their respective booths, the sources said.

The BJP is trying its booth level tested and tried strategy in West Bengal where polls are scheduled to be held early next year.

The party has emerged as the main challenger to the ruling TMC, winning 18 of the 42 Lok Sabha seats in the 2019 elections with more than 40 per cent of total votes.