In the wake of the confirmation, all districts have been put on alert and directed to follow precautionary protocols, an official said. 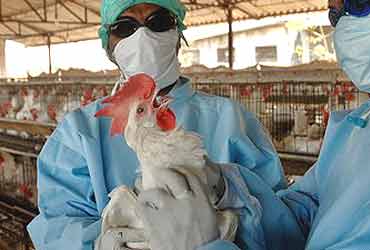 Chhattisgarh recorded its first confirmed cases of bird flu on Thursday after samples collected from chickens that died at a poultry farm in Balod district tested positive for avian influenza, an official said.

The director of state veterinary services, Matheshwaran V said,  the samples were collected from five out of over 150 chickens that were found dead at GS Poultry Farm in Gidhali village under the Dondi development block.

These samples were sent to the National Institute of High Security Animal Diseases (NIHSAD) in Bhopal on January 11 for examination and determination of the cause of death, the official said.

"Reports of all five samples came positive for H5N8 avian influenza virus on Thursday," he said.

As per the Central government's guidelines, the area within 1 km radius of the poultry farm has been declared as an "infected zone" and the Rapid Response Team (RRT) has launched necessary action, he said.

Transportation of poultry will be prohibited, while restrictions will also be imposed on the movement of people and vehicles in the infected zone, he said.

Apart from this, the area from 1 km to 10 km of the poultry farm has been declared as a "surveillance Zone", where monitoring of poultry birds will be carried out, the official added.

Another veterinary officer said, culling of the poultry birds at the farm will be carried out on Friday.

As per the guidelines, the birds will be buried in a 10 feet dip pit and salt and bleaching powder will be sprinkled in it.

Disinfectants will also be sprayed to prevent spread of the virus while filling the pit, he added.

The birds which were earlier found dead in the farm have been buried in keeping with the protocols, he added.

Delhi Schools To Reopen On Monday: Here’s All You Need To Know