At Condolence Meet In Heaven, Jinnah Would Have Taunted Gandhiji Today: RJD's Manoj Jha On CAB

When the German state discriminated against Jews, RJD's Manoj Kumar Jha said, 'The history is a testament to the fact that alongside jews were persecuted those who stood by the former.' 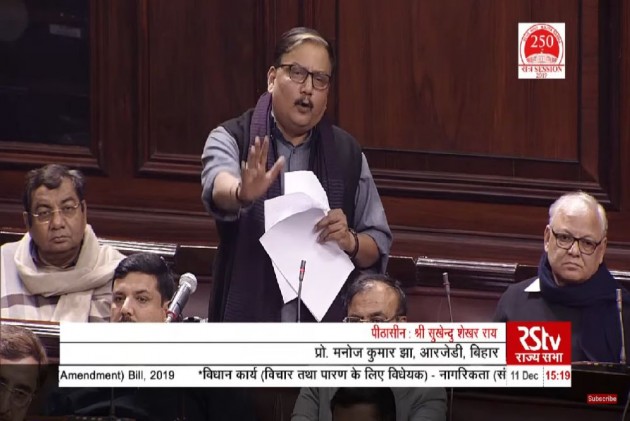 Rashtriya Janata Dal (RJD) MP Manoj Kumar Jha on Wednesday expressed his displeasure against the controversial Citizenship Amendment Bill (CAB), saying the draft law was "constitutionally suspect" adding, "it is constitutionally bad, morally bad and therefore, must not be accepted."

Paraphrasing Oliver Cromwell, Jha said: "I beseech you in the name of Constitution, think once, for once that you might be committing a great blunder."

Reiterating what others members had already mentioned on the floor of the Rajya Sabha, Jha said there was a great need to understand what the term "persecution" actually meant. "When a state persecutes," he said, "it doesn't differentiate between A, B, and C communities."

2,000 Troops To Be Moved From Kashmir To Northeast As Protests Against Citizenship Bill Turn Violent

When the German state discriminated against Jews, Jha said, "The history is a testament to the fact that alongside jews were persecuted those who stood by the former."

The RJD MP contested home minister's claim that CAB and NRC should be looked at in isolation. "No, it can't be," Jha said, "the issues that emerged out of NRC in Assam forced you to bring in a law to guard yourself against your own mistakes."

Jha asked what the Central government was going to do with "stateless citizens." He said Bangladeshi Premier said he had been assured by Prime Minister Narendra Modi about her concerns vis-a-vis NRC.

"Today a condolence meeting would have been held in heaven in which Nehruji, Gandhiji, Patelji and others would have sat in silence while (Mohammad Ali) Jinnah would have come and taunted Gandhiji by saying that let alone Pakistan, India has now become parallel to Israel," Jha said.

"Please stop, I urge you, please stop and make better use of your majority."