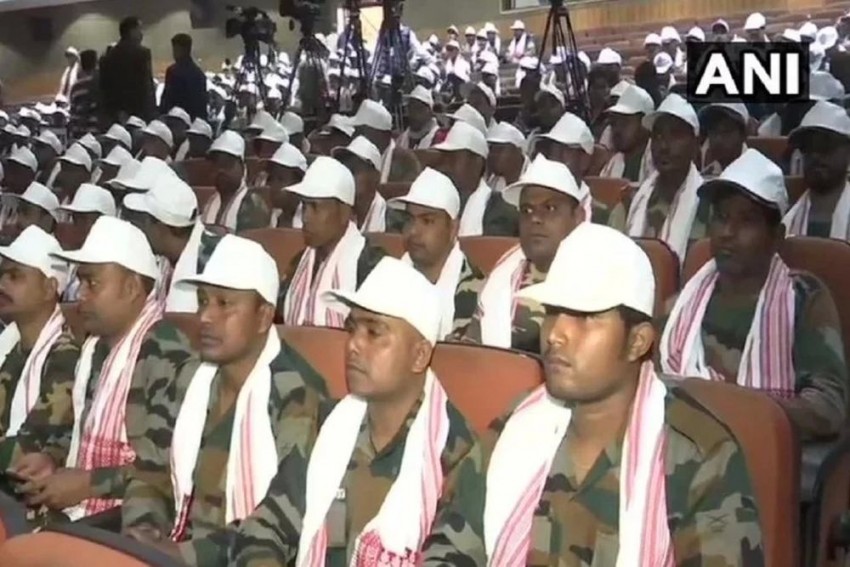 As many as 644 cadres of 8 militant groups surrendered at the Arms Laying Down Ceremony, in presence of Assam Chief Minister Sarbananda Sonowal.
ANI/Twitter
Sadiq Naqvi January 24, 2020 00:00 IST Assam Insurgency: Nine Youth Suspected To Have Joined ULFA Amid CAA Protests 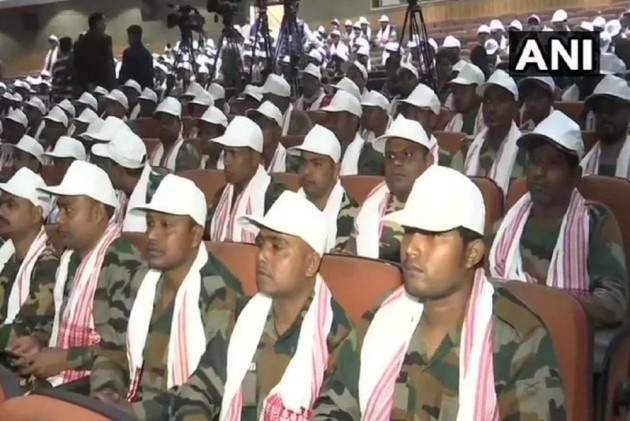 “The families have registered missing person reports. While we are not certain, there is a suspicion that they may have joined ULFA(I),” a senior official of the Assam Police told Outlook.

The development comes even as the state held an event where a total of 644 cadres of eight militant outfits who ceremonially laid down arms. The event was attended by Chief Minister Sarbananda Sonowal and other senior security and government officials.

Sreejith T, the Superintendent of Police, Dibrugarh, confirmed that there have been two missing person reports in the Chabua town of the district in the last three weeks by the families of teenagers aged 18 and 19.

Chabua was one of the most severely affected parts of the state, where violence broke out on December 11 as the Citizenship Act was passed in the Parliament.

In neighbouring Tinsukia, a senior police official confirmed six such missing person reports since December. This police official, too, said the suspicion is that they may have joined ULFA(I).

“It is not confirmed. But we are suspecting he may have gone to join ULFA(I),” Meena said.

Brahmaputra Valley has been up in arms against the Centre’s decision to bring the CAA which fast-tracks giving citizenship to non-Muslim minorities immigrating from Afghanistan, Pakistan and Bangladesh. In Assam, several groups contend that the new law violates the Assam Accord of 1985, which promised deportation of all illegal immigrants who came after March 24, 1971-- the cut-off date for citizenship in the state. They also claim the law is anti-constitutional.

“ULFA(I) is trying to take advantage of the prevailing situation in the state,” said a police official on condition of anonymity.

He also added that earlier this month as many as ten men from Dibrugarh, Tinsukia and Charaideo districts, who split into groups of five each, were arrested from various districts of the state.

“They planned to go to Myanmar to join the ULFA(I) camps,” the official said adding that all the ten persons have been charged under various provisions of the law including UAPA.

In contrast, as many as 50 ULFA(I) cadres surrendered in 2019 amid sustained efforts by the security forces and a clampdown on their camps in neighbouring Myanmar by the Tatmadaw.

These 50 former militants were part of the arms-surrender ceremony in Guwahati on Thursday.

“Today 644 cadres of eight militant organisations who surrendered and came to unilateral ceasefire in 2019 and prior to that have formally laid down arms in a ceremony in presence of CM of Assam, Chief Secretary of Assam, DGP Assam, GOC 4 Corp and other senior officers in Guwahati,” Assam Police said in a statement.

The senior Assam Police official quoted above said it was a big development. The official said apart from the 50 ULFA(I) militants, eight of the National Democratic Front of Bodoland including its foreign secretary Evangel Narzary and six from the Kamtapur Liberation Organisation, also surrendered in 2019. He said others surrendered in the previous years.

A lion’s share of the 644 persons, around 90%, who laid down arms came from lesser-known outfits. Assam Police said as many as 310 belonged to National Liberation Front of Bengalis, 178 from Adivashi Dragon Fighter and 87 came from National Santhal Liberation Army.

South Asia Terrorism Portal, which keeps track of militant outfits and their activities classified NLFB and ADF as inactive outfits while it classified NLSA among outfits who are in peace talks or ceasefire.

Kamal Pal, the former chief of the NLFB said the group was formed in Kokrajhar district in 2011 in reaction to “atrocities against the Bengalis including how they were being marked as doubtful voters and put in detention camps.”

Pal said the group gave up arms in December 2015 and was hopeful that the members would be rehabilitated by the current government.

Sonowal said the state government will help in rehabilitation.

“Those youths who strayed into terrorism and extremist activities must be given an opportunity to come back to mainstream society and rebuild their lives. I welcome all members of extremist groups who have laid down their arms today to lead a normal life again and contribute meaningfully to the nation-building process through hard work and dedication,” Sonowal said at the event adding that it will inspire other such militant organisation members to come back to mainstream society.