Artificial Lake Formed In Uttarakhand Due To Clogging Of Stream; Further Damage Likely If Breached: Experts

In the aftermath of floods, an artificial lake has been formed on the Rishi Ganga river in Uttarakhand’s Chamoli district, officials said 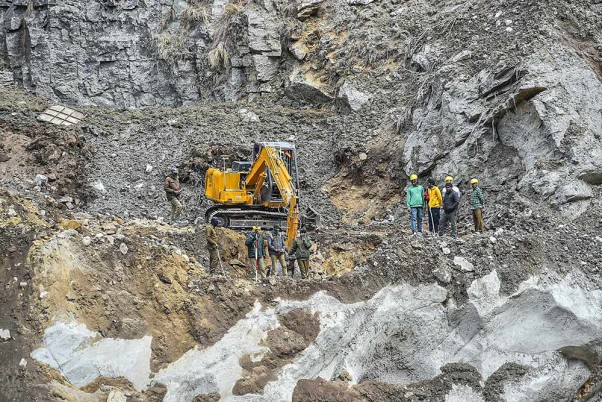 Announcing the formation of an artificial lake in Uttarakhand’s Chamoli district, the Wadia Institute of Himalayan Geology, has said that the debris brought by the avalanche in the state earlier this week has blocked a stream that joins the Rishi Ganga river forming a temporary lake which if breached can cause further damage in the valley.

The Central Water Commission, had earlier said the length and height of the lake was 350 meters and 60 meters respectively. "An artificial Lake has formed on river Rishiganga in Chamoli district, Uttarakhand, with a length of 350 m height of 60 m with slope of 10 deg,” the commission tweeted.

An artificial Lake has formed on river #Rishiganga in #Chamoli Dist #Uttarakhand with length of 350 m height of 60 m with slope of 10deg. Video showing the lakse is uploaded. pic.twitter.com/nNRzVrExlX

Ever since the lake was formed, the Chamoli district administration issued an alert asking people to avoid going to the banks of the river. Satellite pictures of the glacial lake suggest it has formed on the confluence of Raunthi Gad and Rishi Ganga.

Chief Minister Trivendra Singh Rawat said the depth of the glacial lake is not known, and asked people not to panic but maintain caution.

According to Wadia Institute of Himalayan Geology (WIHG) director Kalachand Sain, a team of scientists from the institute conducted an aerial survey of the upper reaches of the Rishi Ganga just a day after the Sunday avalanche and spotted the new glacial lake there.

The team took some photographs of the lake from a helicopter. It seems that the recent avalanche has led to its formation in the higher stretches of the Rishi Ganga's catchment area, he said.

"Our scientists are examining the size of the lake, its periphery and the volume of water it contains to ascertain how big and immediate the danger from it is," Sain told PTI.

According to the report by the Wadia Institute of Himalayan Geology (WIHG), an organisation of the Department of Science and Technology, the assessment of the actual magnitude of risk involved due to this impoundment of water requires a detailed survey.

"The catastrophic floods on Sunday also brought sediments in the Rishi Ganga river. Since the width of the river is very less in the upper stretches, the sediments have blocked a stream forming a lake which may breach and cause further damage in the valley," Sain said.

A portion of the Nanda Devi glacier broke off in Uttarakhand's Chamoli district on Sunday, triggering an avalanche and a deluge in the Alaknanda river system that washed away hydroelectric stations and endangered lives of people living along the banks.

According to WIHG, a mass of rock weakened over a period of time due to freezing and thawing of snow must have led to the creation of a "weak zone" triggering its collapse which brought down sediments. The avalanche was also accompanied by a thick pack of snow and ice that overlaid the rock surface, it stated.

This resulted in the formation of a temporary dam that eventually breached, causing the deadly floods in Chamoli district on Sunday.

The incident occurred adjacent to the Raunthi glacier. The area also has glaciers that feed the Rishi Ganga river, which ultimately joins the Dhauli Ganga.

The steep slopes of the mountains in the region further increased the intensity of the crash. The stretch of the avalanche was about three kilometres with an average slope of 37 degrees, before reaching the "Raunthi Nala/Gadhera" floor at an altitude of about 3,600 metres.

Meanwhile, Chamoli District Magistrate Swati S Bhadauria said an eight-member team comprising of scientists of the Geological Survey of India has been formed to inspect the lake and submit its report to the district administration at the earliest.

Last Date For Private Candidates To Apply For Board Exams Extended To February 25: CBSE