How To Cook Like An Economist! Interview With Nobel Laureate Abhijit Banerjee

Nobel laureate Abhijit Banerjee in conversation with Outlook about his book ‘Cooking to Save Your Life’.

“A meal is a piece of economics because it is an exercise in balancing many constraints”, says Nobel laureate Abhijit Banerjee in conversation with Outlook about his book ‘Cooking to Save Your Life’.

Unlike many Bongs, dal is Dr Abhijit Banerjee’s favourite dish and he mentions that if he is asked to pick up one thing that he would like to take to an island, it would be dal. He also discusses the rising tomato price and suggests other souring agents which can be used to make a dish. Banerjee won the 2019 Nobel in economics along with his wife Esther Duflo for their work towards transforming antipoverty research and relief efforts. Duflo and Banerjee's focus have been on studying a wide range of topics implicated in global poverty, including health care, education, agriculture, and gender issues, while developing new antipoverty programs based on their research.

Banerjee also talks about why cooking as a hobby, which is an exercise in excesses, is not inherently dichotomous to his work as a social scientist. Excerpts:

The process that went behind writing a cook book…

It wasn’t a deep thought. It just started with writing recipes because my brother-in-law asked for some. I gave the recipes to him on Christmas. In the process of writing, a lot of effort went into listing ingredients and then I started writing stories to go with the recipes so that it was a little less boring than it would have been otherwise. But this process started three years back then suddenly it occurred to me that maybe it is actually a book that I should write. I had this idea at the back of my mind that one day I will be writing a cookbook. So, I showed this book to Chiki Sarkar, the publisher of Juggernaut Books. I had a word with the illustrator Cheyenne Olivier, then the real process of turning it into a book started. 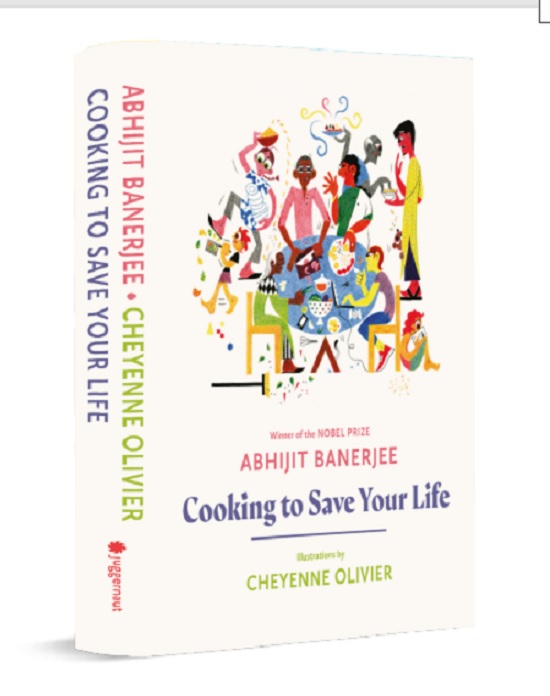 How is food symbolic of India's lost harmony?

There is unnecessary politicisation of food in India. There's this whole issue of beef. But it's worse than that. It is about shutting of stores in Gujarat where they sell non-vegetarian food in the city. Even the state BJP head of Gujarat was protesting against that. There seems to be so much aggression against private preferences. If you look at the average meat consumption of an Indian Muslim versus an Indian Hindu Bengali, there's almost no difference. Nobody eats a lot of meat. This obsession with this particular meat or that particular meat misses the main point - that our traditional diets in India are relatively based on local produce that are relatively sustainable. In Bengal we eat lots of seafood. If you are Muslim, you are Christian, you are Hindu, you eat the same thing. Lots of seafood and vegetables. Everything else is expensive and out of reach. I am not saying we don't eat a lot of meat because of ideological reasons, it is just more expensive. Politicising food seems entirely gratuitous in that context, where most people don't have enough food to eat and eat what they can. Sometimes to celebrate they'll eat some form of meat, whatever is cheaply available.

What was the thought behind dividing the chapters into several segments like soups, salads, sea-food etc?

It’s very much a Bengali way of eating that there should be some vegetables, some starters, some dessert and something to end with. It is how we eat in Bengal, a full course meal and that’s how I have divided the chapters into. It is very Bengali to eat in courses something that you don’t see in the rest of India interestingly. In a Punjabi household all the dishes are served all at once. So, the chapters are basically a reflection of the way we eat in Bengal.

What is your favourite dish?

Dal. If I had to pick one thing to take with me to a deserted island, I would take dal roti or dal chawal with me. In the cook book we have three examples of dal from Bengal, one of them is a thick roasted moong dal with cauliflower and tomatoes which is extraordinarily rich, then we have the very light mung dal with lime leaves that is flavourful and light. The third one is the comforting dal masoor dal with carrots. I somehow disagree that Bengal dal preparations are bland. The range of dals we have in Bengal is kind of stunning.

I don’t know if you have eaten the dal with fish head, you may love it or hate it. Again, we have the urad dal cooked with milk extremely scrumptious and rich and great for the winters. It’s got the strong flavouring of fennel. When I was growing up, in our house in Bengal we were served three dals in a meal which were tetor dal (bitter dal), tokar dal (sour dal) and a basic plain dal to eat with vegetables.

I like aloo posto (Potatoes made with poppy seed paste), but I feel begun (eggplant) posto is stunning. For me potatoes need a lot of spiking to get the flavours otherwise I find potatoes a bit bland. Eggplants have a very distinct taste of their own and you don’t need to overpower it with the posto. This is just my personal taste I would say.

Poppy seeds are hugely expensive in India, what is the other alternative that you can think about?

Yes, it is hugely expensive, but you don’t need a huge amount of it to make a dish. You just need fifty grams of it. And if you want to dilute it you can make it an eggplant mustard posto or you can add a dash of coconut. Actually, coconut and poppyseeds ground together make a wonderful dish. These are things that you can do to save on the cost.

How is a recipe an enunciation of your economic ideas?

This book has a lot more economics because of Cheyenne and Chikki Sarkar. Both were pushing me saying well, you haven't put yourself as an economist in the book. The introduction to all the chapters were written because Chikki and Cheyenne were very keen. More than a recipe, a meal is a piece of economics. It's an exercise in balancing many constraints, which is sort of the core idea of economics. There is time constraint, there is attention constraint, ingredient constraint, money constraint, machine constraint. For every meal you have an hour. You have an objective. And then you are trying to get there by designing a meal. Partly, you want to build a story around the meal so that it sounds more than it is. You want to form some kind of narrative around what you start with, what you end up with, what you serve at the end. And that process of doing it with limited time and resources, that to me is at the heart of economics.

The challenge on the introduction was to link food to those very important issues without getting too heavy on it but still bringing out the pleasure related to food. The pandemic brought to the fore that food is connected to all of our economic issues in very deep ways. But at the same time, very intimate. This is what we tried to achieve, especially in the introduction... We wanted to bring a social context to all the recipes in the cook book.

Your book has a number of dessert recipes; don’t you think eating sweets in India is a luxury?

To be honest, in India, people eat too much sweets. We have a diabetes problem in our country. Every household in India that you visit the first thing they will offer you is a hot cup of tea with lots of sugar. Sugar is actually one of the things that a lot of people without money add to their dishes to bring about some excitement to their diet. That is the main problem in India because sugar is too much the go to for excitement. It’s like in the US, where poor people drink tons of Coke which is just a sugar vehicle.

Tomato prices are really going up, can you please suggest one dish without tomatoes?

Tomatoes are overused in Indian food. We have so many alternative souring agents like tamarind is wonderful. In the south the same potato dishes are made with tamarind. There are many dishes where tomatoes are not needed, but we overuse them. It is time we investigate all the traditional souring ingredients of India like kokum, tamarind, green mango aamchur (dried mango), aanardana (pomegranate seeds), and yogurt. I think not using tomatoes in dishes is an opportunity to recreate the dishes in a more creative way.

Is there an inherent dichotomy in cooking as a hobby and being a social scientist?

No. Everyone has a place for pleasure. What the pandemic did was to find everyone's comfort space. At one time in the US, you couldn't buy flours because everyone was baking. Everyone found their inner cook during the pandemic because they needed some domain for creativity. Cooking is one of the most accessible domains of creativity. Most people have a very limited domain of creativity... It’s not a matter of how much you spend. It's more about expressing yourself within constraints.

How is food related to social structures?

In India, when I was growing up, men only cooked meat. Everything else was a woman's domain. And that was entirely within the middle class. We had a professional cook at our home and he was a man. If you were poor, you cooked for a living. But if you were a middle-class male, it was completely beneath your dignity to cook. And it's still true. In the US, if it's about grilling or barbeque, only then you would have men doing those. But making a basic salad is still a woman's job.