Surrounded by the security personnel, a smiling Chidambaram joined hands and said: '5 per cent. Do you know what is five per cent?', indicating it with his right hand. 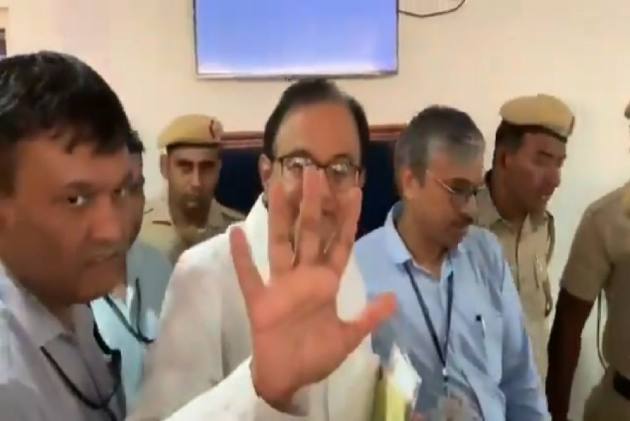 Former Finance Minister P. Chidambaram on Tuesday took a swipe at the BJP-led government at the Centre over the current gross domestic product (GDP) figures when he was asked to react to the Delhi court's decision to extend his CBI custody till September 5.

As the Congress veteran stepped out of the Court No 502 where Special CBI Judge Ajay Kumar Kuhar was hearing his bail plea, a reporter asked the question.

Surrounded by the security personnel, a smiling Chidambaram joined hands and said: "5 per cent. Do you know what is five per cent?", indicating it with his right hand.

When asked what he meant by it, he responded, "You all know what is 5 per cent", and walked away.

"5%...GDP is 5%": #PChidambaram reacts outside the #Delhi court when he is asked if he has to say anything after prolonged #CBI custody. pic.twitter.com/JQIHVUh29b

Chidambaram was remanded to two more days of CBI custody in the INX Media corruption case.

India's economic growth has slumped for the fifth straight quarter to an over six-year low of 5 per cent in the three months ended June as consumer demand and private investment slowed amid deteriorating global environment.

Having lost the tag of the world's fastest-growing economy earlier this year, India's GDP growth was behind China's 6.2 per cent in April-June, its weakest pace in at least 27 years.

Chidambaram was arrested by the CBI in the INX Media corruption case almost two weeks ago from his residence after a Delhi court rejected his anticipatory bail plea.

The former finance minister has been in the CBI custody ever since.