For the 2020-21 crop year, the Centre has set a target of a record foodgrain output of 301 million tonnes, out of which it expects 151.65 million tonnes to come from the rabi season. 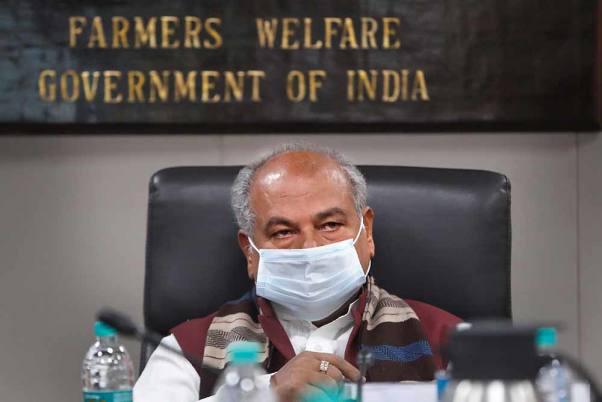 The country's rabi foodgrains production including wheat in the ongoing 2020-21 crop year is expected to be better than the previous year's record of 153.27 million tonnes, according to agriculture minister Narendra Singh Tomar.

Sowing of rabi (winter) crops is under way. The rabi sowing begins from October immediately after the harvest of Kharif (summer) crops. Wheat and mustard are major rabi crops. The crop year runs from July to June.

Speaking to PTI, Tomar said the country's agriculture sector performed well during 2020 as foodgrain production rose to a record in the Kharif season with farmers working hard despite the Covid-19 pandemic and proving their relevance.

"This year, we hope better foodgrain production in the rabi season than last year (same season)," he said.

For the 2020-21 crop year, the Centre has set a target of a record foodgrains output of 301 million tonnes, out of which it expects 151.65 million tonnes to come from the rabi season.

Further, the minister said progress to be made in the recent government initiatives including two new farm laws on marketing, the formation of 10,000 FPOs (Farmer Producers Organisations ), Rs 1 lakh crore Agriculture Infrastructure Fund, will also benefit farmers and boost the sector.

"I hope farmers' hard work and the Modi government's pro-farmer policies will strengthen the agriculture sector. New reforms will also benefit the sector," he added.

According to the official data, wheat sowing area has increased by 4 per cent so far this rabi season to 325.35 lakh hectare, while pulses acreage grew 5 per cent to 154.80 lakh hectare on better monsoon rains.

The paddy coverage was down marginally to 14.83 lakh hectare so far this rabi season from 15.47 lakh hectare in the corresponding period of the previous year.

The area under coarse cereals was down so far this rabi season at 45.12 lakh hectare as compared to 49.90 lakh hectare in the year-ago period. However, the sowing area for oilseeds was up at 80.61 lakh hectare from 75.93 lakh hectare a year ago.

In the 2019-20 crop year, the country's overall foodgrains production stood at a record 296.65 million tonne, as per the government's fourth advance estimate.